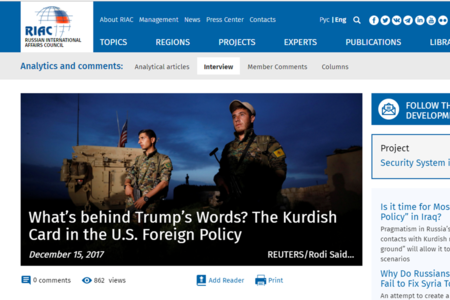 What’s behind Trump’s Words? The Kurdish Card in the U.S. Foreign Policy

During Press Briefing held on November 27, Press Secretary of the White House Sarah Sanders stated that the United States is now in a position to stop providing military equipment to certain opposition groups in Syria referring to Donald Trump’s phone call with President Recep Tayyip Erdogan. According to the Turkish Foreign Minister Mevlut Cavusoglu, Trump had “given clear instructions” that the Kurds (Kurdish People's Protection Units) will “receive no more weapons.” The Pentagon reiterated the claim announcing “pending adjustments to the military support provided to the Kurdish partners.”

Evgeniia Drozhashchikh, Rethinking Russia expert and postgraduate student at Lomonosov Moscow State University, asked Kerim Has, PhD in Political Science, expert on international affairs and Russia-Turkey relations with RIAC, about their views on Trump’s motives and willingness to use “the Kurdish card” in elevating relations with either one side or another.

Shall Donald Trump’s decision underpinned by Press Secretary’s performance be perceived as the political drift towards Turkey? Is there willingness to smooth bilateral US-Turkey relations concealed behind the motion?

Kerim Has: I’m not that sure that this is the case. First, as you know, the Pentagon is more liable for the Syrian operation than the administration representatives. Therefore, I cannot judge at once whether Trump’s words will correspond with reality. September talks between President Trump and President Erdogan were marked by Donald Trump saying that U.S.-Turkey relations are at an all-time high. But in a while there appeared to be a visa standoff implying reciprocal suspension of visa-issuance. The situation has smoothed a bit, though it shall not entail excessive enthusiasm. There are still structural problems in U.S.-Turkey bilateral relations. One of them is the court case of Reza Zarrab and Mehmet Hakan Atilla now being held in the U.S. on charges of violating sanctions against Iran. This episode irritates the Turkish political establishment and along with other unsolved matters can hardly be overcome with this Donald Trump’s statement. It is simply impossible to defuse existing tension with this step, if we perceive it this way, forwards. I’d rather wait for forthcoming clashes between two countries.

Then does the decision derive from the wish to signal another side – Russia that the administration is ready to mend ties through suspension of arms deliveries to the opposition groups?

Kerim Has: I adhere to this suggestion and would complement it saying that this is a signal the U.S. is ready for a rapproachment on the Kurdish issue. This scenario is more likely. The operation in Syria and fight against ISIS are coming to the end. The Kurds are already overwhelmed with the American weapons now becoming redundant. Thus, the American side considers a halt in excessive deliveries simultaneously undertaking preliminary measures for regulating the Kurdish question. Though the USA and Russia are not regional players (unlikely Turkey and Iran) they also need to reach an agreement.

When the U.S. states that it will no more deliver armaments – this is a de-escalatory step towards Russia and seemingly towards admitting that the Kurdish region will eventually depend on Damascus in three realms: military sphere, energy and external policy.

Russia and the USA are both doing their homework: Russia persuades Al-Assad to sit to the negotiating table with the Kurds (and there is a chance that during talks in Sochi Putin has convinced Al-Assad in the need for decentralizing the Syrian state) while the American side presses the allying Kurds to discuss the future statecraft with Damascus. If Assad and the Kurds manage to find an agreement – this question will turn into the inner Syrian affairs’ dimension.

Does the US consider the format of the Syrian National Dialogue Congress proposed by President Putin as the means of approaching stances on the Syrian issue?

Kerim Has: There was no clear message on the American behalf. In particular, no message about support. What is evident is that before the Congress will be convened, the sides will try to return the parties (the Syrian government and the Kurds) to the negotiating table to guarantee protection of the Kurds’ interests. This especially comes to the fore due to the fact the Kurds have never been a pure “opposition”: before the crisis erupted they had had only rare clashes with the Syrian regime. They didn’t fight against Al-Assad, rather Syrian Democratic Forces struggled to defeat ISIS.

Coming back to the Trump’s announcement and Sarah Sanders speech, I believe it to be a demonstrative act to show the U.S. is fulfilling its tasks and paving the way for the Syrian political restoration whether it happens through the Congress format or not.