As the Cold War ended, the international system entered a process in which it was afflicted by secessions, sometimes bloody and sometimes peaceful. After 1990 there was a general trend for countries to break up and while countries entering a union was the exception. In 1990, the year the Cold War ended, West Germany peacefully annexed East Germany and North Yemen and South Yemen reached an a peaceful unification on the base of equality. However apart from these two cases, we can find no other examples of countries uniting. In the late Cold War period, the European Community (EC) had transformed into the European Union (EU) and embarked on a deeper integration where economic and monetary union were concerned. These changes might be described as a process of multilateral union. One might also apply this description to the somewhat weaker efforts at economic integration on other regions carried out by bodies like ASEAN, APEC, NAFTA, MERCOSUR.

The Political and Economic Logic of Disintegration

In the period which followed the Cold War, there were many countries were broken up, either by peaceful means or by war. Most of the new states that emerged from this break up appear to be countries which were not economically sustainable and were wrestling with political problems. For these countries, their independence, which did not correspondent to any political and economic realities, might be described as a kind of premature birth. Most of them were assisted in gaining their independence either by the transformation that was under way in the international system or because they had the support of great powers.

The greatest change of this kind to take place was the peaceful dissolution of the Soviet Union in 1991 without a single bullet being fired. When the Soviet Union broke up into 15 states, large and small, underwent a vast change which has rarely been witnessed in the international system. There is virtually no other case in history of such a large and strategically important piece of territory changing hands in a completely peaceful way. The most important reason for this break-up was that although the Russian Federation possessed one of the world’s two strongest armies, it no longer retained the economic strength needed to finance the other republics. Furthermore after the secession of the three Baltic Republics (Estonia, Latvia, and Lithuania) in August 1991, it could have been foreseen that it would be difficult to hold so many different nations together and that the other Soviet republics would ultimately want to separate. So the dissolution of the Soviet Union can only be explained as a consequence of the transformation of the international system.

The breakup of Yugoslavia which got under way in 1991 was by contrast distinctly bloody. Germany lit the fuse for Yugoslavian disintegration because it wished to integrate Croatia and Slovenia into the EU more rapidly. In this process, Slovenia and particularly Croatia fought against Serbia. The Bosnian Muslims paid the price for the disintegration of Yugoslavia and were ethnically cleansed, and perhaps even became the victims of genocide. Despite all the merciless conditions of this war, the Bosnians proclaimed the independence of Bosnia and Herzegovina, though with a rather fragmented structure. Macedonia and Montenegro gained their independence without even going to war.

Kosovo could not become independent together with the other Yugoslav states as it did not have status of a republic, but Kosovo gained a gradual independence after the NATO intervention in 1999. The support of the United States, which wanted to play a part in the Balkans, had an important reason in Kosovo becoming independent. The NATO’s European allies gave their support to the military intervention because Kosovo had a large Albanian majority and if they had not given their support for intervention in the crisis, it looked as if another Balkan War would break out.

Eritrea, the Muslim dominated region of Ethiopia, is another state which won its independence in 1993 through peaceful means. Eritrea had always had a different system of government from that of the rest of Ethiopia throughout history and because of this, an enforced unification in 1952 did not lead to integration in a real sense and the Eritreans fought a war of independence between 1961 and 1991. However, there were frequent clashes between Ethiopia and Eritrea after 1993 because of border disputes.

East Timor chose to separate from the giant Indonesia in 1999. Although it may appear as if East Timor’s independence was peacefully obtained, it in fact came about only as a result of years of intensive pressure on Jakarta and particularly from the Western countries. East Timor was a former Portuguese colony and most of their populations are Catholic Christians, and it received strong support from the EU, the US, and Australia. In 1997 Indonesia was rocked by a financial crisis and struggling with political instability and it acquiesced in independence for East Timor which was not a former Dutch colony, in exchange for agreement not to support separatists in other regions.

The final example of dissolution came in Sudan. The Christian and Animist Africans had long struggled to secede from the central government under the Muslim Arab control. With the support of the Western countries South Sudan achieved independence through peaceful means in 2011 after the holding of a referendum. Intensive pressure from Western governments was instrumental in getting the Khartoum government to agree to independence of South Sudan. However, just as had happened in the case of the break up of Eritrea and Ethiopia, the armed conflicts has begun to erupt soon after the secession of South Sudan because of border disputes. In other words, secession had not supplied a final solution: civil war had simply turned into a border clashes.

The Breakup of Czechoslovakia

Czechoslovakia first emerged as a country in 1918 after the collapse of the Austro-Hungarian Empire. If we disregard the independent Slovak state created by Nazi Germany from 1930-1945, the Czechs and Slovaks lived together until 1993. However, the Slovaks felt themselves to be discriminated in the federation, something which played a part in the break-up. The Czech region inherited the most developed and industrialized parts of the Austro-Hungarian Empire. Throughout history the Czech region had always been more flourishing and rich. The Slovaks were always political overshadowed and received a smaller share of the economic benefits. After the fall of the communist system in 1989, Czechoslovakia set itself the goal of achieving membership of the EU. But the large-scale privatization operations that were planned and the massive revenue that was expected to accrue from them became one of the most potent factors behind the secession from Czechoslovakia.

A rise in Slovak nationalism led to the Czechs accepting that the Czechoslovak identity no longer applies. The Czechs were also encouraged to think of breakup by the fact that their region was more economically developed and had no political problems and it was thus felt that it could become an EU member much earlier. On the other hand, it appeared impossible for Slovakia to satisfy the political and economic criteria for EU membership under the conditions of the early 1990s.

The Slovaks however do not accept this argument regarding the reasons for the breakup. They emphasize in that their Hungarian minority has fitted in very well in recent years. After it joined the EU, Slovakia was able to enjoy much better relations both with its ethnic Hungarian minority and with Hungary itself. The most important problem, and the one which all Slovaks complain about, is the position of the Roma minority. The Roma people in Slovakia tend to perform poorly when it comes to getting educated and when integrating to the Slovak society. They have a fairly high rate of involvement in crime, something which leads to the rejection of the Roma community by the Slovaks. However, the Slovaks add that the problems of the Roma people do not just concern themselves, but the whole of Eastern Europe where the Roma minority are living.

The crucial point about the breakup of Czechoslovakia is that secession happened after a top level decision by the politicians. Vital issues like separation and independence did not go to a referendum. Some Slovaks still complain that the process of splitting the country was carried out in a top-down manner and that after they gained independence, the privatization of industry in Slovakia was not performed in a transparent fashion.

It is also striking that the Slovaks do not like to be asked why Czechoslovakia broke up. There are those who are middle aged or older who think that the split was not a good thing and that Slovakia became a weaker country as a result of division. But among the younger generation there is an emotional Slovak nationalism and they appear to feel certain about Slovakia’s strength and its capacities.

A further interesting fact about the breakup of Czechoslovakia is that when the Czech Republic and Slovakia joined the EU simultaneously, they began to reintegrate once more though now within a much larger body. Today the Czechs and the Slovaks once more use a common currency, though now it is the euro and a common visa system, though now it is the Schengen system. The Czech Republic joined NATO in 1999 and Slovakia did so in 2004, they have also both become parts of the same security alliance.

Moreover, the former republics of Yugoslavia are now going through the same process. They separated from each other in a very different way from what happened in Czechoslovakia and went to war with each other, but they are now eager to reunite with the EU. Slovenia joined in the Union in 2004 and Croatia will do so on 1 January 2013. The other former Yugoslav republics are each waiting their turn. Estonia, Latvia, and Lithuania, the three Baltic republics which seceded from the Soviet Union in 1991, also became members of both NATO and the EU in 2004.

By becoming part of a political, economic, or military entity which is larger than them, the newly independent East European countries obtain economic assistance and ensure their protection against external threats. In this respect, it should be no surprise that these small East European countries immediately fasten their eyes on the EU and NATO after gaining independence.

As with the Czechs and the Slovaks, their position is that we may separate—but we still stand together. 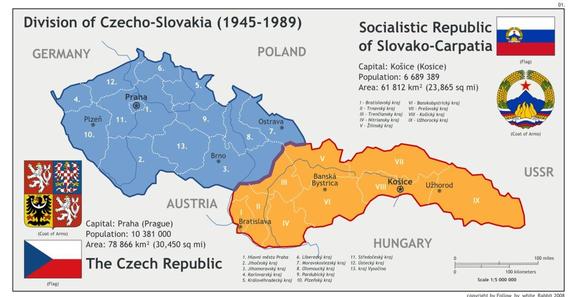 The Logic of Unification and Dissolution of States: The Breakup of Czechoslovakia