the Gambian President Yahya Jammeh at the Çankaya Palace in Ankara on February 11, 2014

President of the Gambia Yahya Jammeh, who upon Turkish President Abdullah Gül’s invitation visited Turkey on 11-12 February 2014, defined the two countries as “strategic friends”. Indeed, relations between Turkey and the Gambia have been conducted in a friendly manner for a long time. Turkey immediately recognized the Gambia after the latter gained independence in 1965; and since then the two countries have been supportive of each other’s foreign policies on the international stage.

Political solidarity on the international stage

Turkey and the Gambia have been supportive of each other’s foreign policies since 1965 from within various international organizations such as the United Nations (UN) and the Organization of the Islamic Cooperation (OIC). When the communist regime in Bulgaria imposed policies of assimilation upon its Turkish minority during the 1980s, the Gambia sided with Turkey on international platforms. Again, regarding the Cyprus dispute, the Gambia has always supported the position of the Turkish Cypriots, who were striving for their equality as a sovereign community. The mutual political solidarity between the two evolved into military cooperation in 1991. The Turkish Armed Forces have been providing support to the establishment and training of a gendarmerie force since 1991. While Turkish military experts have been performing their duties in the Gambia for the last 23 years, Gambian military students have been receiving training in Turkey.

The two countries were late in establishing resident embassies reciprocally, despite their flourishing cooperation on political and military issues. While the Gambia set up its embassy in Ankara in 2010, the Turkish Embassy at Banjul came into operation by 2012. Moreover, the Turkish-Gambian Business Council was founded in 2011.

Another platform over which Turkey and the Gambia work together is the UN Conference on the Least Developed Countries (LDC). The Gambia attended the fourth, Turkey-coordinated conference in Istanbul between 9 and 11 May, 2011. In this respect, Turkey has been actively bringing up the subject of seeking solutions to various developmental problems faced by 48 LDCs, including the Gambia, to the global agenda.

President Gül and President Jammeh decided that Turkey and the Gambia should work together in order to promote tolerance and dialogue among different political, cultural, and religious groups at their meetings in Ankara. The two leaders also exchanged ideas concerning security challenges in the Central African Republic, Somalia, and Nigeria. Agreements in the fields of public healthcare, defense, avoiding double taxation, culture, education, and security cooperation were also signed by relevant ministers in the meantime.

Aside from bilateral trade, there are programs for grants and aid for the Gambia which are delivered by the Turkish Cooperation and Coordination Agency (TİKA), the Turkish Red Crescent, and several Turkish civic NGOs. To date, TİKA has launched multiple projects to develop the Gambia’s fishing sector.

President Gül and President Jammeh agreed to cooperate in the field of tourism by encouraging Turkish tourism firms to invest in the country. While the Gambia aims to become the touristic hub of Western Africa, the capacity of its touristic facilities remains insufficient. In this respect, the Gambian government is expected to allocate appropriate land for Turkish firms to build hotels. Also, Turkey is expected to provide technical assistance, and the Turkish private sector is expected to build hospitals there, all for the development of the country’s healthcare sector. The two countries further agreed to initiate a preparation stage for a free trade agreement (FTA).

In the Turkish-Gambian Business Forum meeting held on 12 February 2014, it was decided that Turkish companies would set up solar panels in the Gambia. From the perspective of the Gambia which does not harbor rich mineral resources, the provision of alternative and low-cost energy resources is crucial. Within such a framework, the support to be provided by Turkish firms in the field of energy resources is of utmost importance for sustainable growth in the Gambia.

Recently, after years of cooperation in the field of military education, Turkey has also begun to award scholarships to Gambian university students to continue their education in Turkey. Therefore, it’s expected that a human resource of qualified, cooperatively-minded individuals familiar with both countries will emerge. Turkey will continue to provide developmental assistance progressively to the Gambia in the coming years. Thus, both Ankara and Banjul aim to conjoin political ties, which have been gradually cementing since 1965, with a stronger social and economic foundation. 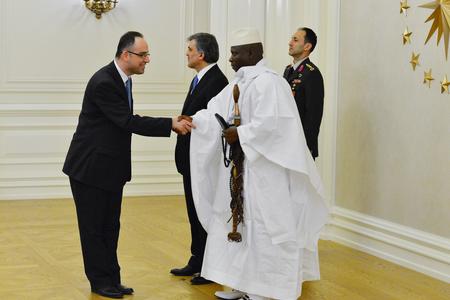