The 2000s have witnessed a leap forward in bilateral relations between Turkey and India. The frequency and number of reciprocal visits by senior political figures has dramatically increased. Improvements were made in economic relations, while bilateral trade volume soared from 500 million dollars in 2000 up to 7 billion dollars in 2013. As a result, India became Turkey’s 13th largest trade partner.

Despite such a significant improvement in political and economic relations, the current state of affairs is still far from reflecting the potential cooperation of the two countries. Relations between Turkey and India, both of which are members of the G-20 and qualify as emerging economies, have the capacity to reach well beyond their current level. On the other hand, a strategic roadmap aimed at improving bilateral relations that identifies areas for in-depth cooperation is yet to be set. That is, a timetable that elaborates on the stages and content of further steps that can be taken in this regard remains missing. And although improvements in commercial relations are considered to be a positive development, Turkey’s foreign trade deficit vis-à-vis India has steadily increased to 5.8 billion dollars in 2013. Therefore Turkish policy-makers are still hesitant to sign a free trade agreement (FTA) with India.

A new era in India under Modi

Turkey-India relations have entered 2014 in the shadow of such a dilemma. Indeed, 2014 was an election year for both countries. The general election in India, however, which was scheduled for May 12, was located in the foreground as its results would determine the fate of the leading Congress Party. The Bharatiya Janata Party (BJP), rather unexpectedly, gained a majority in the parliament as a result of the elections, thus allowing it to form the new government on its own. Because the BJP is a Hindu nationalist party, in addition to the fact that 1,000 Muslims died in clashes between Hindus and Muslims under the previous provincial governorship of BJP leader Narendra Modi in Gujarat, election results caused worry among all ethnic and religious minorities. Again, concerns originating from questions of whether the “multi-cultural, secular democracy”, that has been held in high esteem up until now by India, would be interrupted by Hindu nationalism were often brought to the agenda by the international media.

BJP leader Modi took the initiative to alleviate such concerns with the statements he made both during his electoral campaign and following his election; he not only relayed warm messages to China and Pakistan, which both qualify as India’s regional rivals, but he also invited Pakistani Prime Minister Nawaz Sharif to his inauguration ceremony.

Experts who closely follow Indian foreign policy are of the opinion that such an attitude on Modi’s part was indeed not surprising at all, and that the foreign policy tradition carried on by New Delhi up until now will not be interrupted under Modi. Accordingly, it is underlined that the main reasons behind Modi’s ascent to power were economic in essence, stemming from high inflation, unemployment, slow growth, and rampant corruption. In this respect, the new government under Modi will prioritize economic policies according to the general view. To put it more clearly, India needs to improve its relations with all major economies in the world, and with China first and foremost. Prime Minister Modi is aware of the fact that he first needs to improve New Delhi’s relations with Islamabad, as opposed to giving rise to further tensions with this most important neighbor, in order to promote bilateral ties with the Islamic world and in particular with the G-20 member countries such as Indonesia, Turkey, and Saudi Arabia which harbor Muslim majorities. Likewise, in order to attract foreign capital and investment, he needs to preserve the harmony between coexisting ethnic and religious groups in India, including the large Muslim population in the country, within a democratic and multi-cultural framework. All these priorities are embodied in Modi’s restrained approach and moderate statements, which have been effective until now in alleviating the worries related to the BJP’s rise, both domestically and in the international arena.

Hopes for a new beginning

The first impression made by Modi presents an opportunity for Turkey as well, in terms of upgrading relations with India in the forthcoming period. In this respect, it is necessary to identify fields in which relations between the two countries can yield concrete results on a larger international scale, as well as on the bilateral level. Firstly, Ankara and New Delhi share many priorities on the multilateral level. Both countries have a broad experience in the resolution of conflicts all around the world through peaceful means and diplomacy. Both countries provide assistance to peace-keeping missions with their military and police forces in all corners of the world. They both argue that the structure of the United Nations Security Council (UNSC) needs to be reformed, and its membership list rearranged. New Delhi wants to be admitted to the Security Council as a permanent member with no veto power, and Ankara has similar demands as well. Moreover, the two countries are working to develop a common political agenda and economic policies under the umbrella of the G-20.

Turkey and India are also in agreement with regard to various regional issues. They share a set of common policies aimed at the stabilization of Afghanistan. Turkey and India carried out significant projects in Afghanistan, following the NATO intervention in 2001. The two countries can follow a common cause, and cooperate more closely in the maintenance of stability and promotion of development in Afghanistan following NATO’s withdrawal from the country at the end of 2014. Likewise, India and Turkey can embark on joint economic projects and seize the initiative for conflict-resolution in various parts of Africa, a continent over which both have considerable influence. It is also known that Ankara hopes to cooperate with New Delhi in finding a solution to the ongoing civil wars in Iraq and Syria.

The most important subject for the sake of advancing bilateral relations is the ordered placement of economic and commercial transactions within a certain framework. In this respect, the FTA to be signed between Ankara and New Delhi is of the utmost importance. Preparations for an FTA have been in progress since 2008, but negotiations are yet to be commenced. The two parties can formulate the agreement in a way in which both benefit. Turkish companies taking part in infrastructure and construction projects in India, and Indian companies with high-tech capabilities increasing their investments in Turkey form the solid ground upon which a balanced economic partnership can flourish. Likewise, sectors such as the defense industry and tourism have a high potential for boosting bilateral cooperation. Cooperation in the film industry and education can further serve public diplomacy by enabling the Turkish and Indian peoples to gradually come into frequent cultural contact and to familiarize themselves with one another.

In sum, it is possible to make a fresh start which will reinvigorate the immense potential between these two countries that each occupy extremely important positions in their respective regions. And the ‘Modi era’ unprecedentedly offers a fresh and great opportunity to this end. 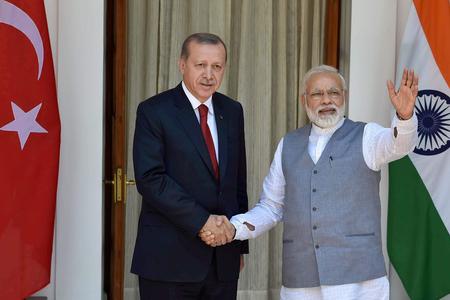