Turkey has fostered friendly relations with the Republic of Korea (ROK) since the latter gained independence in 1948. The relationship first began when, in act of military solidarity with pro-Western South Korea and in political opposition to communist North Korea, Turkey sent troops to the Korean War which took place from 1950-53. Consisting of 4,500 military personnel and maintaining a presence on the Korean Peninsula for 10 years from 1950, the Turkish brigade suffered about 1,000 causalities throughout the course of the war and was largely disbanded in 1960.1) In 1966, the remaining 180 Turkish personnel withdrew and were replaced by a single symbolic Turkish squad.2) This last squad, consisting of 15 soldiers, ultimately withdrew from Korea in 1971.3)

Due to the Korean War, a relationship based on a very solid foundation has been formed between Turkey and South Korea. Many activities of the Turkish brigade in Korea allowed the two communities to become better acquainted with one another, with one such example being the Turkish military’s establishment of the “Ankara School and Orphanage”, which was constructed for Korean orphans and remained active until the 1960s.4) For such reasons, assessments of Turkey-ROK relations frequently employ the reference of a unique “blood brotherhood”.

During the Cold War period, Turkey and ROK engaged in various forms of political and military cooperation vis-à-vis North Korea. Nonetheless, despite the strong political discourse of friendship between the two countries, in the meantime, the economic relations and socio-cultural exchange between the two had remained at extremely low levels for many years.

In this vein, the relations between Ankara and Seoul seemed to experience a renewed deepening in the 1990s. Over the last 25-year period, the traffic of high-level contacts between the two has intensified, and their bilateral trade volume has begun to regularly increase. Also during this period, it has been observed that South Korean companies have increased their investments in Turkey. During Korean Prime Minister Lee Soo-Sung’s visit to Turkey in 1996, for example, it was decided that the Hyundai Motor Company would produce automobiles in Turkey.5)

Moreover, since the beginning of the 2000s the two countries have come to increasingly engage in cooperation in the defense industry. Here, in 2001, the Turkish Land Forces and the Korean multinational conglomerate Samsung signed an agreement on an artillery control system which was valued at around $1 billion.6)

In terms of their economic relations, South Korea seems to be more active in its trade with Turkey than vice versa, which could be a result of its more competitive structure. Specifically, of the total $8 billion bilateral trade volume, South Korea’s exports to Turkey dominated in 2014 at around $7.5 billion. With a national income of 28 thousand dollars per capita, and as the world’s 13th largest economy, South Korea has yet to occupy a significant share of Turkey’s domestic market. At this point, the implementation of the Free Trade Agreement (FTA) which entered into force in 2014 bears great importance. According to the 2014 figures, although the total trade between Turkey and South Korea
increased to $1.5 billion, nearly the entirety of this amount was constituted by South Korea’s exports to Turkey. This dynamic could prove problematic for the development of bilateral economic relations if within the first few years of practice an unbalanced situation appears in
favor of South Korea.

In this regard, there is the risk that this could cause reluctance the part of Turkey in developing deeper relations with South Korea due to the existing trade imbalance.

Taking this reality into account, Seoul has implemented compensatory policies to amend this asymmetry by requiring South Korean companies to make investments in Turkey, and to meet the technology needs of certain Turkish companies. Ankara also seems willing to utilize its robust political relations with Seoul to advance cooperation with the country in the fields of defense industry and nuclear and alternative energy.

At this point a great opportunity to expand Turkish-South Korean bilateral economic cooperation has been missed when it comes to Turkey’s Sinop nuclear power plant tender. Since 2009, South Korean, Chinese, and Japanese firms had engaged in a fierce competition to provide the best terms for the construction, operation, and transfer of the proposed nuclear power plant in Sinop, Turkey, which has come to be valued at about 22 billion dollars. Throughout and subsequent to the plant’s ten-year-long construction process, it is expected that the country which wins the Sinop project will make a significant leap in its economic relations with Turkey. However, starting in 2009, the tender process saw initial negotiations that were conducted with South Korean KEPCO end in disagreement in November 2010, as the offer by a Japanese-French consortium later came into favor.7) Nonetheless, Turkey’s recent plans to issue a tender for a third nuclear power plant could represent a new opportunity for South Korean companies.

Research shows that the Turkish and South Korean societies’ perceptions of one another are very positive, perhaps due in part to the impact of the countries’ historical friendship. In fact, it could be argued that the two peoples’ affinity for one another is actually the greatest driver of the two countries’ relations. Today, according to the concept of people-to-people diplomacy, the best way of bringing bilateral relations between two countries to a level of indispensability is by building strong ties between their respective peoples.

The interaction between the Turkish and South Korean societies has risen throughout the 2000s. However, people to people contact between two countries are still low level. For example, the number of South Korean tourists visiting Turkey is estimated at 250 thousand in 2014, while more than 30 million foreign tourists in total visit Turkey every year.8) This is quite low despite of recent increase, especially considering that in 2014 the number of South Koreans that traveled abroad on holiday was around 16 million.9) Ankara evaluates tourism as a sector which promotes stabilization in its relations with Seoul. But as well as being an economic sector, tourism boasts an important mission in terms of public diplomacy. In this respect, social contacts must be reciprocal. While in recent years the growing middle class of Turkey prefers to go on holiday abroad, the number of Turks who visited South Korea in 2014 was only 22 thousand. To increase the social interaction between these two societies, it is important to increase the number of student exchange programs.

Ultimately, it can be observed that despite the lofty rhetoric of friendship in the realm of Turkish-South Korean relations, the two countries share no common political vision that ensures their cooperation at both the bilateral and international level. Nonetheless, Ankara and Seoul have been striving to elevate the framework of their political cooperation to that of a strategic partnership throughout the 2000s. However, if such a strategic partnership is to be successful, Turkey and South Korea should develop common political stances on regional and global issues, and furthermore, they must be able to defend these postures within international organizations and forums such as the UN and the G20. In this context, the MIKTA formation which was established within the G20 may serve to assist in the development of a common approach towards global issues that could be adopted between Ankara and Seoul. 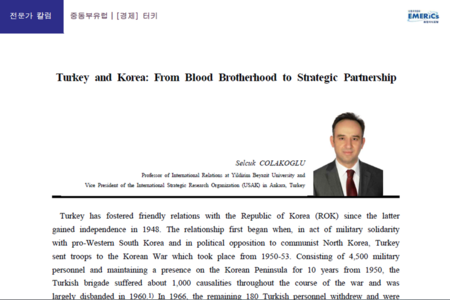 Turkey and Korea: From Blood Brotherhood to Strategic Partnership