Turkey, which connects Europe and Asia, is an important country involving the Belt and Road. The China-proposed development initiative will enhance the role of Turkey as an important player on the Eurasian continent, said Professor Selcuk Colakoglu, Director of the Turkish Center for Asia Pacific Studies, in an interview with Beijing Review before the opening of the Belt and Road Forum for International Cooperation, which will take place in Beijing from May 14 to 15.

The professor said Ankara views the Belt and Road Initiative favorably, as it firmly believes that the commercial relations between Turkey, countries in the Caucasus region and Central Asia and China will be amplified through the implementation of prospective projects in the near future.

As to the prerequisites for the realization of the Belt and Road Initiative, reinforcing transportation infrastructure and improving intra-regional logistics links come to the fore, added Colakoglu. "In that regard, the Belt and Road Initiative is expected to form the backbone of a greater vision of multi-dimensional integration between Turkey and the rest of the region concerned and raise the level of relations between these countries to their highest level."

Colakoglu noted that the Belt and Road Initiative will set the scene for closer bilateral relations between regional countries based on mutual trust and substantial economic cooperation, as new railway lines envisaged by the initiative will carry significant numbers of passengers and freight volume in both directions.

Moreover, Colakoglu said that bilateral economic relations will be protected from the potentially disturbing effects of fluctuations in the value of the U.S. dollar thanks to two-way trade in national currencies instead.

According to Colakoglu, Ankara is also looking forward to capitalizing on Turkey's geostrategic advantage, which essentially derives from its position at the intersection of traditional transport routes connecting Europe and Asia. With this initiative, Turkey wishes to place itself once again at the center of inter-continental transport routes, this time by way of hosting a major railway corridor between Europe and Asia that will facilitate trade in energy resources, agricultural produce, other raw materials and manufactured goods.

"For the improvement of its Middle Corridor, Turkey aims to complete missing links on the route with mega projects, promote intermodal transport opportunities, enhance logistics and corridor management capacities, and remove bottlenecks, especially on border crossings," said the professor.

Summing up, Colakoglu said the Belt and Road Initiative provides potential leverage that can enable Ankara to increase its economic and political influence and become the ultimate playmaker in the Eurasian arena. 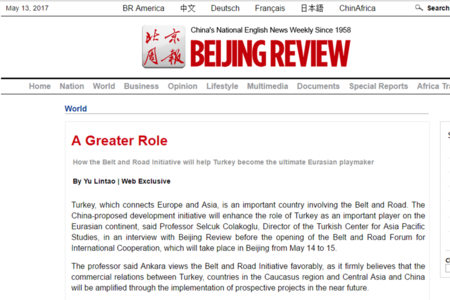