The Shanghai Cooperation Organization after the Joining of India and Pakistan

The SCO Summit that took place on June 23-24, 2016 in Tashkent, the capitol of Uzbekistan, signifies a historic turning point. As one may remember, after being founded by China, Russia, Kazakhstan, Kyrgyzstan, and Tajikistan in 1996 with the initial name of “Shanghai Five” for the stated objectives of reinforcing border security and combating extremism along with separatism; the group was upgraded to a full-fledged multilateral organization to operate on a regional scale in 2001, with a permanent secretariat in China. The decision to include Uzbekistan, which shares borders with neither China nor Russia, marked the institutional transformation of the “Shanghai Five” into what we today refer as the SCO. That said, the group had nevertheless maintained its core identity as a largely Eurasian entity from its official foundation in 2001 till 2016. For a long time, the SCO even refrained from considering the candidacy of any other country bar Mongolia, Turkmenistan, and Afghanistan – which did not make any formal appeal for full membership in the first place.

Chinese and Russian priorities had consistently overshadowed any other considerations when it came to steering the SCO during this process. As a matter of fact, Russian and Chinese expectations as to the future vision of the SCO has been on a collision course since the inception of the group. On the one hand, China is known to opt for the “deepening” of the platform rather than its “enlargement”, which means adding an extra dimension to the SCO’s narrow focus on security-oriented cooperation through the promotion of economic integration among its membership. On the other hand, it is no secret that Russia is increasingly annoyed with China’s mounting influence over the group and individual Central Asian countries alike. From Moscow’s standpoint, growing economic integration within the SCO will inevitably boost China’s clout over Central Asia at the cost of Russia’s gradual exclusion from the region. Therefore, Beijing has felt obliged to settle for an exclusively security-oriented vision for the SCO as long advocated by Moscow, with the latter having previously established the Eurasian Union for the sole purpose of steering economic integration across the former Soviet realm. In that regard, the granting of observer status to India, Pakistan, and Iran in 2005 was interpreted as a major sign that the SCO was heading towards unidimensional expansion instead of deepening.

The significance of Indian and Pakistani membership

As a matter of fact, the initial prospect of SCO membership for Pakistan, India, and Iran looked dim. They were rather expected to retain their observer status. Against such a backdrop, the ultimate admission of two large and important states like India and Pakistan last month should be seen as a precursor of a new era in the SCO’s evolution. Now that the SCO has exceeded beyond its original horizon that was strictly limited to Eurasia, its hand is freed to operate within a much broader geographical range as an emerging Pan-Asian entity.

Moreover, the SCO used to be a regional organization that was run in tandem by Russia and China by this time. But the admission of India and Pakistan, both of which span a vast geographical area and harbor huge populations within their borders, may drastically alter the leadership structure within the SCO. New Delhi may be particularly expected to emerge as the third center of gravity within the SCO after Beijing and Moscow. Furthermore, thanks to the SCO, Pakistan has gained an institutional window of opportunity to make inroads into Central Asia.

On the other hand, the membership of India along with Pakistan, i.e. its historical arch rival, may constitute either an impediment or an opportunity for the SCO. A platform like the SCO, which has security-related cooperation at its heart, will offer a matchless chance for India and Pakistan to discuss their mutual problems at the multilateral level; for it facilitates year-long dialogue and regular meetings between foreign and defense ministers along with bureaucratic contacts on technical matters in addition to annual summits. The joint participation of Indian and Pakistani troops in collective military exercises by SCO members may contribute dearly to this process by enhancing mutual ties. Conversely, the admission of New Delhi and Islamabad may expose the SCO’s institutional development to various risks should other members, particularly Beijing and Moscow, fail to manage bilateral disputes between the two subcontinental behemoths in a constructive manner within the structure of the SCO. At any rate, with India and Pakistan as full members, the SCO will assume a greater role in addressing the existential problems of Afghanistan, an observer state, concerning domestic peace, sustained stability, and reconstruction.

There are also questions around what kind of an impact India’s membership will have on the SCO’s strategic stance, which has traditionally been embodied in its anti-Western, particularly anti-American rhetoric. That is because India has forged intimate ties with both Japan and the United States since early 2000s, even to the extent of agreeing on joint patrols in the Indian Ocean and the highly-disputed South China Sea. In this respect, Beijing expects India to comply with the SCO’s overall approach to the East China Sea and the South China Sea disputes, both of which directly involve China. Thus, India’s membership to the SCO can be regarded as an opportunity for Beijing in the name of neutralizing – if not securing the full support of – New Delhi as concerns the South China Sea dispute. India’s crucial experience of having worked closely with China and Russia since 2009 within the framework of the BRIC (later known as the BRICS), which is an alternative international body bringing together non-Western emerging economies, cannot be ignored here. It is such substantial experience that will probably allow India to strike the right balance between its pro-Western foreign policy priorities one the one hand and anti-Western sentiment as promoted by Moscow and Beijing on the other.
As to Iran’s bid for SCO membership, the final obstacle seems to be removed after Tehran was freed from the grip of UN sanctions following the nuclear deal with the P5+1 countries last year. Therefore, not only will Iran’s admission to membership in the near future help consolidate the SCO’s anti-Western stance and provide a counterweight vis-à-vis India in that regard; but it will also grant the SCO a vital foothold in the Middle East.

Despite its overwhelming security agenda, the SCO nevertheless provides China the opportunity to push for a continent-wide economic opening. Previously, China is known to have made repeated attempts to adapt its “One Belt, One Road” (OBOR) initiative, which was announced in 2013, to the Russian-led Eurasian Union. Now it got the chance to not only harmonize the OBOR initiative with the existing multilateral framework in Central Asia but also readjust it in accordance with the economic specificities of South Asia by means of various SCO mechanisms. Having already earmarked over $46 billion for the construction of highways, railroads, pipelines, airports, power plants, and harbors as part of the landmark China-Pakistan Economic Corridor (CPEC) deal that was introduced in 2015; Beijing has now set its sights on tapping into other lucrative markets across South Asia, using the SCO as leverage. Now that India is incorporated as a full member, Afghanistan as an observer state, and Nepal and Sri Lanka as dialogue partners into the SCO; similar deals envisaging large infrastructure projects in these countries will be easier to carry into effect. In that regard, Cambodia’s successful bid to receive the status of dialogue partner signifies another milestone moment in the SCO’s evolution, for the group has now expanded even into Southeast Asia. To top it all, the SCO has made further inroads into the Caucasus, the Black Sea Basin, and the Middle East by admitting Belarus and Iran as observer states while granting the status of dialogue partner to three other states: Turkey, Azerbaijan, and Armenia. Taken together, these are the very regions that form the backbone of China’s ‘Belt and Road’ vision.

In sum, the SCO has entered a new period with the 2016 Tashkent Summit in terms of its institutional development. The admission of India and Pakistan as full members will lend fresh impetus to its structure which had become stagnant in recent years. Apparently, the SCO will continue to extend its clout further into Asia and the Eurasian land bridge via subsequent waves of expansion. At this point, the group’s ultimate success as an international organization will depend on the larger security context, its ability to respond fluctuations in international balances, and its sustained facilitation of economic cooperation as much as the nature and extent of the gains to be made through further territorial expansion. 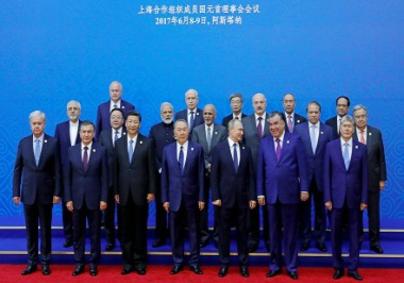