"We (are) committed to working together to take on the challenges from China and on issues like the East China Sea, the South China Sea, as well as North Korea, to ensure a future of a free and open Indo-Pacific," Biden said in a joint press conference after the meeting.

As the U.S. and Japan are two strong democracies in the region, they will also both defend and advance such shared values as human rights and the rule of law, Biden said.

Suga said both sides also had serious talks on China's influence over the peace and prosperity of the Indo-Pacific and the world at large.

"We agreed to oppose any attempts to change the status quo by force or coercion in the East and South China Seas, and intimidation of others in the region," he said.

Meanwhile, Suga said, Japan and the U.S. agreed on the necessity for each of them to engage in frank dialogue with China to pursue stability of international relations, while upholding universal values.

Asked by reporters on the exchange of views about Taiwan in their take on China policy, Suga responded that "we also discussed the circumstances in Taiwan and Xinjiang Uyghur Autonomous Region as well."

While he refrained from mentioning details since it pertains to diplomatic exchanges, Suga said "there is already an agreed recognition over the importance of peace and stability of the Taiwan Straits between Japan and the United States, which was reaffirmed on this occasion."

In a joint statement issued after the summit, both sides "underscore the importance of peace and stability across the Taiwan Strait and encourage the peaceful resolution of cross-Strait issues."

It was the first time since 1969 that the U.S. and Japan have issued a statement that mentions Taiwan.

The statement said that the U.S. and Japan share serious concerns regarding the human rights situations in Hong Kong and the Xinjiang Uyghur Autonomous Region.

The two countries recognized the importance of candid conversations with China, reiterated their intention to share concerns directly, and acknowledged the need to work with China on areas of common interest, according to the statement.

During the summit, the U.S. and Japan also agreed to work together across a range of fields, including promoting secure and reliable 5G networks, and driving joint research in areas such as AI, genomics, and quantum computing. 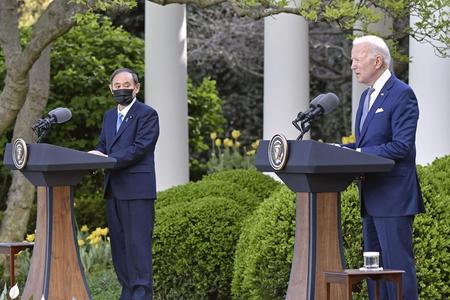