Sultan Haji Hassanal Bolkiah Mu’izaddienWaddaulah of Brunei paid a remarkable visit to Turkey between April 7 and 11, 2012. Sultan Hassanal Bolkiah met with Turkish Prime Minister Recep Tayyip Erdogan, who was preparing for his own visit to China and on April 10 held a summit with President Abdullah Gül.

Brunei is one of the smallest countries in the world with an area of 5,765 square kilometers and a population of around 400,000 people. Oil and natural gas resources that it possesses make Brunei one of the world’s wealthiest countries.

This visit by the Sultan of Brunei was the first high-level visit between the two countries and as such it is of great importance for their bilateral relations. There had previously been almost no senior-level visits before. The first visit from Turkey paid by Sadi Türel, the Turkish Minister of Energy and Natural Resources, in February 1985, just after Brunei has gained independence from the United Kingdom in 1984. However, bilateral contacts did not seem to have subsequently increased.

The highest-priority step to be taken in developing bilateral relations is the opening of embassies in each other’s capitals. As neither country currently has a mission in the other, Turkey’s embassy in Kuala Lumpur is accredited to Brunei and Brunei’s embassy in Amman is accredited to Turkey. The fact that consular and diplomatic services are provided only via Malaysia and Jordan makes it difficult for people to people contacts. During the Sultan’s visit, an agreement on lifting mutual visa requirements was signed and thus an obstacle in the way of bilateral relations was removed.

During their meeting, President Gül and Sultan Hassanal Bolkiah reached an agreement on the opening of embassies in Ankara and Bandar Seri Begawan in order to ensure regular diplomatic contacts between Turkey and Brunei. Agreements were also signed to hold business forums at regular intervals and for exchanges of students and academics, as well as increasing the number of high-level official visits. This will enable both Turkey and Brunei to know each other better and develop bilateral cooperation.

Brunei offers Turkey a number of other economic opportunities. The country is rich in oil and gas, and just like the Arab Gulf states, it imports a wide range of consumer goods and food products. Turkish companies ought to be able to pick up a larger share of Brunei’s annual spending of $2.5 billion on imports. As of 2011, the annual volume of trade between Turkey and Brunei was about $7 millions. Developing commercial relations with Brunei in order to bring variety to the Turkish economy will also be useful in opening up the Southeast Asian market. Brunei has one of the highest incomes per capita in the world at around $50,000 dollars a year, and it could certainly be an attractive market for the Turkish tourism industry. Furthermore, Brunei is one of the rare countries in East Asia with which Turkey has a trade surplus.

During his visit to Turkey, Sultan Hassanal Bolkiah signed agreements providing for an increased volume of trade with Turkey, increased bilateral investment, and cooperation on defense projects. An agreement was also reached on increased cooperation in tourism, science, culture and art. In addition to its trade surplus with Brunei, Turkey would like to attract investment from that country.

Brunei’s Role for Turkey in ASEAN

Though Brunei is a tiny country, it plays a very active role in Asian organizations such as APEC and ASEAN. Consequently, Turkey can look forward to much closer cooperation with Brunei as it starts to develop its relations with ASEAN.

In July 2010, Turkish Foreign Minister Ahmet Davutoğlu took part in the 43rd meeting of ASEAN foreign ministers in Hanoi and signed the ASEAN Agreement for Friendship and Cooperation on behalf of Turkey and the Turkish Ambassador to Jakarta, also accredited to ASEAN. Turkey’s next aim is to establish a dialogue partnership with ASEAN. Relations with ASEAN are very important for Turkey in terms of developing more institutionally-structured cooperation with the rising economies of Southeast Asia. Besides, Brunei will occupy the rotating presidency of ASEAN in 2013 and Brunei’s support to Turkey will help foster relations with all ten members of ASEAN. Turkey and Brunei are two countries which are also able to cooperate within the Organization of Islamic Cooperation.

One can say that following the visit of the Sultan, cooperations between Turkey and Brunei are likely to grow much faster in many fields. 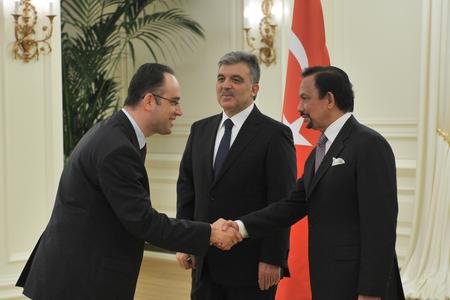 The welcoming ceremony to the participants of the official dinner by the Turkish President Abdullah Gül and the Brunei President Hassanal Bolkiah at the Çankaya Palace in Ankara on April 8, 2012