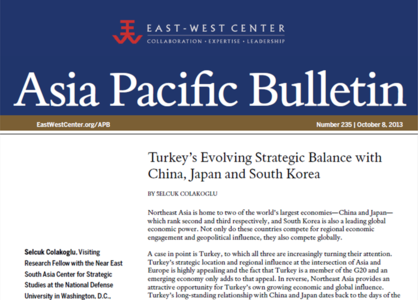 Northeast Asia is home to two of the world’s largest economies—China and Japan— which rank second and third respectively, and South Korea is also a leading global economic power. Not only do these countries compete for regional economic engagement and geopolitical influence, they also compete globally.

A case in point is Turkey, to which all three are increasingly turning their attention. Turkey’s strategic location and regional influence at the intersection of Asia and Europe is highly appealing and the fact that Turkey is a member of the G20 and an emerging economy only adds to that appeal. In reverse, Northeast Asia provides an attractive opportunity for Turkey’s own growing economic and global influence.Turkey’s long-standing relationship with China and Japan dates back to the days of the Ottoman Empire, though during the Cold War Ankara’s foreign policy towards Asia was aligned with that of the United States. During the Korean War Turkey’s relationship with South Korea was described as one of “blood brotherhood,” with Turkey contributing combatant forces to the war effort in which over 700 Turkish soldiers were killed and 2,100 wounded.

Japan has historically been Turkey’s largest trading partner in Asia, and since the 1960’s Japanese influence has continued to increase. Prior to 1971, Turkey recognized Taiwan as the legal representative of mainland China, and it was not until August 1971 that Turkey and mainland China established diplomatic relations. Over the past twenty years however, both China and South Korea have increased their outreach to Turkey and since 2008, China has become Turkey’s third largest trading partner behind Germany and Russia. South Korea and Japan rank 20th and 29th respectively.

A good example of the economic rivalry between China, Japan and South Korea is the competition to win contracts for the construction of the $22 billion Sinop nuclear power plant in northern Turkey. The rewards for the successful winner are immense, not only in the economic sphere but also potentially extending to deeper political ties. yInitial negotiations with the Korean company KEPCO ended unsuccessfully in 2010. Turkey then signed a nuclear cooperation agreement with the Japanese company TEPCO in December 2010. However, the Fukushima nuclear disaster in March 2011 resulted in TEPCO withdrawing from the project that August. The Chinese company CGNPC subsequently submitted a very economical and cost-effective bid which many industry watchers thought would succeed. However, the Japanese company Mitsubishi entered into a consortium with France’s AREVA and finally won the bid last May. Many credit the award of the contract to a Japanese joint-venture as a reflection of Japanese Prime Minister Shinzo Abe’s new active foreign policy. Abe closely followed the bidding process and the primary reason for his sudden visit to Turkey last May was to attend the signing ceremony of the nuclear cooperation agreement.

On the geopolitical level, Turkey is closely watching the maritime disputes among the three Northeast Asian neighbors. Turkey has a long history of maritime disputes with Greece regarding territorial waters, continental shelves and exclusive delimitation issues. Ankara’s  experience is that maritime disputes are resolved through the use of a political will as much as through legal means.

The Senkaku/Diaoyu Islands issue between Japan and China is potentially the most volatile maritime dispute in Northeast Asia, an issue that is increasingly becoming a symbol of the struggle for leadership in Asia between Japan and China. Although Ankara has thus far kept to its traditional position of neutrality on this issue, it fears that an escalation of regional tensions may negatively affect its relations with both countries. Japan and South Korea also have bilateral sovereignty disputes and Ankara refrains from choosing between the two.

Another problematic issue in Northeast Asia for Turkey is the future of Taiwan. One primary reason why Turkey is very careful in developing its relationship with Taiwan is the Chinese province of Xinjiang. The rights of the indigenous Uyghur population of Xinjiang, a Turkic-Muslim people, have been the cause of a number of disagreements between Ankara and Beijing since 1971. Turkey has preferred to overcome such disagreements through trust-building and the strengthening of bilateral relations. Ankara’s calls for improving the political and economic conditions of the Uyghur population through integrationist policies have met a positive response from Beijing and this has triggered a new strengthening of relations after the Urumqi riots of 2009. In this framework, China has made it easier for Turkish businesspeople to invest in Xinjiang and has invited Turkish official delegations to the region to explain how the Chinese government is working to develop Xinjiang’s economy. In addition, the Chinese air carrier, Hainan Airlines, began direct flights between Urumqi and Istanbul in July 2011. As a result, Ankara is very wary of unilaterally improving its relations with Taipei at the cost of undermining Beijing’s trust regarding Xinjiang. Though Turkey continues to aspire to develop its economic relationship with Taiwan, steps to do so—visa exemptions and direct flights between the two countries—have been deterred by a disapproving China.

Regarding the Korean Peninsula, Turkey stands side-by-side with South Korea on every issue related to North Korea. This is a reflection of the strategy followed by Turkey since the Korean War. An enduring testament to Ankara’s friendship with Seoul is that Turkey has refused all of Pyongyang’s overtures since the 1970s to develop bilateral relations.

US policies in the region are another factor that ought to be considered when evaluating Turkey’s relations with Northeast Asia. Throughout the Cold War Turkey adhered to an Asia policy parallel to that of its NATO ally, the United States. Today, US relations, especially with China, will have a determining influence on Turkey’s relations within Asia. Turkey has been careful not to engage in security cooperation with China that would run counter to US regional strategy. In the case of a confrontation between the United States and China, Ankara will follow a policy compatible to that of Washington.

Selcuk Colakoglu is a Visiting Research Fellow at the Near East South Asia Center for Strategic Studies at the National Defense University in Washington, D.C. and Director of the USAK Center for Asia-Pacific Studies in Ankara, Turkey. He can be contacted via email at scolakoglu@gmail.com.

The Asia Pacific Bulletin (APB) series is produced by the East-West Center in Washington.

The views expressed in this publication are those of the author and do not necessarily reflect the policy or position of the East-West Center or any organization with which the author is affiliated.