The initial impulse for Pakistan and Turkey to pursue security cooperation stemmed from their common opposition to Communism in the 1950s. Over the past decade, Pakistan and Turkey have once again sought to cooperate in the security sphere, this time in countering terrorism and ensuring stability in Afghanistan.

Turkey and Pakistan cemented their security relationship by signing the 1951 Treaty of Eternal Friendship.[1] This led to their increased cooperation with NATO and the United States. As a reflection of its solidarity with the West, Turkey sent combatant forces to the Korean War. Beginning in 1952, NATO membership provided Turkey with an institutional framework through which it could shape its foreign policy around the Western alliance.[2] Pakistan, for its part, began receiving American military aid in 1954.[3]

The Agreement on Turkey-Pakistan Friendship and Cooperation was signed in February 1954. To ensure that the agreement would not harm relations with India, Turkey emphasized that the pact with Pakistan would serve to increase peace and prosperity in the region.[4] Turkish Prime Minister Adnan Menderes also took on a mediation role in solving problems between Pakistan and Afghanistan.[5]

The early 1960s saw increasingly strained ties between Pakistan and the United States on the one side and between Turkey and its NATO allies on the other. Although Ankara objected that the participation rights granted by the Cypriot constitution to the Turkish community in Cyprus were constrained, the Western bloc subtly condoned this situation. American President Lyndon B. Johnson sent a letter to Prime Minister İsmet İnönü in 1964 criticizing Turkey’s role in the Cyprus crisis. This made Turkey revise its traditional pro-Western foreign policy and normalize its relations with the Socialist bloc and the Third World.[6] After the United States imposed an arms embargo on both Pakistan and India during the Indo-Pakistani War of 1965, Pakistani officials were incensed[7] and began to pursue a rapprochement policy toward China, which could supply Pakistan with arms and military materials.[8] Both Pakistan and Turkey went further by joining Iran in setting up a new organization called the Regional Cooperation for Development (RCD) in 1965, which aimed to promote their national priorities. Therefore, because of disappointment in American policies toward the region, Turkey and Pakistan developed a more independent political and security agenda to secure their national interests during the 1960s and 1970s. [9]

In the 1970s, Turkey and Pakistan provided both political and military support to one another. Ankara aided Pakistan diplomatically and militarily throughout the process of Bangladesh gaining its independence, and did not recognize Bangladesh until Pakistan did. Regarding the Cyprus issue, Pakistan gave Turkey its full support and provided it with military-logistic supplies. Then, both Pakistan and Turkey perceived the Iranian Revolution and the Soviet invasion of Afghanistan, both in 1979, as inimical to their security interests. These shared security perspectives led to a reengagement with the United States and a U.S.-backed Turkey-Pakistan alliance. During the 1990s, Turkish-Pakistani relations weakened a bit due to the countries’ inability to build an economic partnership. Also, Ankara gave higher priority to the newly independent countries that emerged out of Yugoslavia and the Soviet Union in the Balkans and in Eurasia, respectively. Pakistan mainly prioritized the stabilization of Afghanistan in the aftermath of the Soviet invasion.

Throughout the first decade of the 2000s, the challenge of maintaining stability in Afghanistan after the NATO intervention became the main element of bilateral relations between Turkey and Pakistan. NATO’s intervention in Afghanistan in 2001 shook Pakistan’s sensitive ethnic and religious structure at its core. Turkey strove to contribute to the domestic stability of Pakistan during this era, and took over official mediation efforts between Afghanistan and Pakistan.

Turkey brought leaders from the two countries together to overcome their disagreements regarding the strategy to fight the Taliban, which had grown increasingly effective in its tactics after 2005. As a result, in April 2007 Turkish President Ahmet Necdet Sezer, Afghan President Hamid Karzai, and Pakistani President Pervez Musharraf issued the Ankara Declaration, which aimed to increase cooperation among the three countries. The declaration focused on strengthening bilateral relations, territorial integrity, and non-interference in one another’s domestic affairs.[10]

In his visit to Pakistan in June 2003, Turkish Prime Minister Recep Tayyip Erdoğan and Pakistani Prime Minister Zafarullah Khan Jamali agreed to support one another regarding their respective Cyprus and Kashmir issues.[11] In 2004, the parties also signed cooperation treaties to fight international terrorism and organized crime.[12] Turkey helped Pakistan after its earthquakes and flood disasters in the 2000s as well.[13]

By December 2008, when the second trilateral summit between Turkey, Pakistan, and Afghanistan was held, the presidents of Turkey and Pakistan had changed. After a short-term political crisis in Turkey, Abdullah Gül succeeded Ahmet Necdet Sezer in August 2007. Pakistan, on the other hand, experienced a more troubled transition process. Ethnically and religiously driven violence soared at a time of increasing opposition to Musharraf. Bending to pressure, Musharraf allowed Benazir Bhutto, who was abroad, to run in the February 2008 general elections. After Bhutto was assassinated during her electoral campaign in December 2007, the country slid into more instability. Then Asif Ali Zardari, Bhutto’s husband, replaced Musharraf, who finally had no choice but to resign on August 18, 2008.[14] As in previous terms, such changes in leadership positions did not affect the countries’ bilateral relations.

On October 24, 2009, Ankara and Islamabad agreed that Turkish Aerospace Industries would undertake the modernization of F-16 fighter jets belonging to Pakistan. In addition, Turkey agreed to help Pakistan improve relations with Central Asian nations.[15] During Gül’s visit to Islamabad in April 2010, it was agreed that Turkey would monitor the region more closely during its term presidency (2010-2012) of the Conference on Interaction and Confidence-Building Measures in Asia (CICA).[16] Ankara also tried to facilitate the normalization of Islamabad’s relations with NATO, which had deteriorated due to drone attacks.[17] While Pakistan demands that all drone attacks end due to the fact that they cause civilian casualties and increase public affinity toward terrorist groups, NATO and U.S. military officials argue that such operations are indispensable in combating terrorism. Turkey acted as a facilitator to at least keep relevant diplomatic contacts alive between the two parties amid such a controversial and polarizing subject.

In the seventh trilateral summit held on December 11-12, 2012 in Ankara, initiatives to enhance political, economic, and cultural affinity among the three countries were put in place, in addition to assurances of cooperation in the fight against terrorism. The countries also decided to extend the existing railway network in Turkey and Pakistan to Afghanistan and to develop links between their respective industries, such as telecommunications and energy.[18] Though one cannot definitively say that the seven summits held between 2007-2012 contributed to the normalization of relations between Islamabad and Kabul, the fact that the summits as well as a dialogue between the two countries were maintained is in itself a success.

From opposing the expansion of Communism in the 1950s to fighting against international terrorism and working toward Afghan stability in the 2000s, security concerns have unified Turkey and Pakistan.

Another constant actor in Turkey-Pakistan relations has been the United States, which established a military alliance with Ankara under NATO and with Islamabad at a bilateral level. Even during periods when Turkey and Pakistan experienced political problems with Washington, this security cooperation arrangement continued.

The priority of Turkey-Pakistan cooperation in the coming years will be maintaining stability and security in post-2014 Afghanistan. In this respect, Ankara’s priority will be patching up bilateral relations between Afghanistan and Pakistan despite ongoing disputes in order to pave the way for cooperation. Turkey will also bolster initiatives aimed at the normalization of relations between Pakistan and India through handling bilateral disputes while avoiding confrontation.

However global dynamics evolve, it can be said confidently that security cooperation between the two countries will continue. 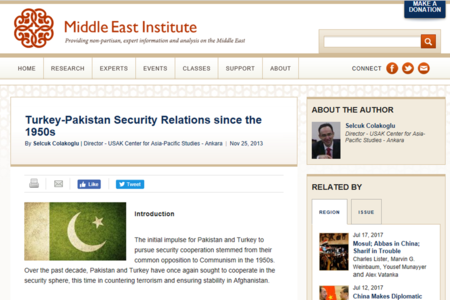 Turkey-Pakistan Security Relations since the 1950s