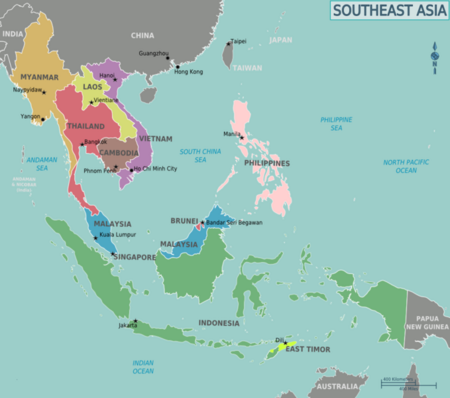 The group of nations that make up Southeast Asia are geographically positioned along strategic maritime chokepoints which define a vast sea transport infrastructure. It includes the South China Sea, the Melaka Straits, the Java Sea, and the Straits of Lombok and Makassar. Much of the region’s domestic trade, and all coastal and intraregional trade moves by sea. A high volume of international trade funnels through the South China Sea, en route from Africa or Suez, to North Asia.[1]

Due to intense maritime movement, there are different perceptions of threat attributed to the region. Particularly, a combination of diplomatic, physical re-positioning and rhetorical constructs are designed by big powers, to suit their strategic interests.

The US, Japan, India, and Australia (the Quad) mooted the Indo-Pacific construct in 2007. It supports their agenda in Southeast Asia, of managing geo-strategy and trade. The US especially wants to maintain its hegemony over trans-oceanic trade, something it has enjoyed since the post-World War II era. US-led economic and security initiatives  frame the Indo-Pacific regional architecture, in the form of the U. S. Pacific Command (USPACOM), the Pacific Rim, the Asia-Pacific Economic Cooperation (APEC), the Rim of the Pacific (RIMPAC) naval exercise and the West Pacific Naval Symposium (WPNS).[2]

Most recently, the Quad’s Indo-Pacific construct represents the most comprehensive attempt to secure trans-oceanic economic and strategic architecture. Middle powers in Southeast Asia see this as an expanded theatre of US-China rivalry fueled by the “rules-based”, “freedom of navigation” and “free and open shipping lanes” rhetoric. Such rhetoric is embodied in the National Security Strategy of the United States document, which was released in December 2017.

Southeast Asia as a region is relatively peaceful. However, it is situated in the midst of extra-regional anxiety around China’s assertive economic and naval projections. ASEAN prefers to defend the right to its centrality in this regional security architecture, in order to manage potential conflict. ASEAN’s distinct flavor of economic and security diplomacy is key.

In June 2019, ASEAN adopted the ASEAN Outlook on the Indo-Pacific. It is a guide for ASEAN’s engagement in the Asia-Pacific and Indian Ocean regions. Since the conception of the Indo-Pacific idea in 2007, ASEAN sees it as a strategy to link both oceans. After 2017, with former US Secretary of State Rex Tillerson’s “twist” to the idea, the Indo-Pacific took on a different meaning. “Freedom of navigation”, “free and open access” and “rules-based order” has meant different things, depending on who is saying it.

Southeast Asian perspectives on the Indo-Pacific are conditioned by the South China Sea tensions, as well as the Korean peninsula and Taiwan crises. These issues are also of great concern to extra-regional powers. ASEAN’s consistent refusal to be caught up in great-power rivalry, as well as its insistence on being neutral within Southeast Asia are the main reasons for being skeptical of the Quad construct.

The multilateral platform of the East Asia Summit is significant as it was initiated by ASEAN, and not by big powers like the US, India, or Japan. This projects ASEAN’s primacy, and unity, based on its own terms of freedom of navigation, sovereignty, and inclusivity. In other words, ASEAN’s acceptance of the Indo-Pacific construct should be on condition that it is not overshadowed by Quad interests.

There is also a Eurocentric bias in how universalism is conceptualized by the Quad powers. There is a tendency to view Westphalian notions of international law as universal standards, while non-Western practices are viewed as aberrations or something inferior.[3]

Much of how geopolitics is analyzed today is an extension of European diplomatic history and American foreign policy. Values embodied in the Peace of Westphalia (1648) are fundamental to these analyses. Perspectives on regional and international order (such as the Indo-Pacific) are derived from the Westphalian model, with regards to conflict management, autonomy, hegemony, and agency.

By contrast, the impetus for ASEAN regionalism emerged during a period of decolonization and nation-building. When ASEAN was formed in 1967, economic and political integration were strategies for confidence-building and regional identity. The region was intent on resisting great power intervention, vowing to be free of the historical yoke of colonial imperialism.

Southeast Asian perspectives on the Indo-Pacific stem from the region’s historical experience, and the use of regional cohesion as a collective bargaining tool with extra-regional entities. At the same time, common geopolitical and economic interests within ASEAN act as a cohesive glue, with compassionate understandings of the various historical backgrounds of all member nations.

Having said that, the ASEAN member states seem more united on economic issues than security-related issues. In the security realm, it has been difficult to find a consensus among the different member states in this area. Each views the regional security architecture differently, based on overlapping claims in the South China Sea, with specific reference to China’s Nine-Dash Line.

Nevertheless, Southeast Asian countries prefer an inclusive regional architecture, engaging as many regional stakeholders as possible, including China and the US. This is in line with ASEAN’s overall balanced platform for mutual prosperity through economic integration, of which China’s Belt and Road Initiative (BRI) plays a key role. However, the degree of support extended to China’s BRI by the ASEAN countries varies.

Malaysia is inclined to draw more on China’s resources through the BRI, even though recently, the major project of the East Coast Rail Link (ECRL) with China has undergone financial review and human resource modifications. The latter represents prudent initiatives by Malaysia’s previous administration under Mahathir, in the wake of massive financial setbacks brought on by the 1MDB scandal.

Indonesia adheres to its non-aligned identity and is clear in its quest to keep the region independent of big power rivalry. China’s investment is mainly aimed at boosting Indonesia’s hinterland connectivity, and not its ports, which are the main focus of Indonesia’s own Global Maritime Fulcrum (GMF) policy.

Singapore draws commercial benefits from China and refrains from any special relationship on security issues. Given the historical nature of their relationship and the South China Sea dispute with China, Vietnam is the most cautious of all ASEAN countries. It does not appear enthusiastic about the BRI.

As a result of these permutations, ASEAN’s understanding of a regional construct is different from the key principles or mechanisms of regional order derived from Western imagination. The China-is-a-threat perception is the basis of the Quad’s Indo-Pacific narrative. For ASEAN, ‘threat’ and ‘fear’ present a real but myopic view of the region. It is a Eurocentric bias, that ignores indigenous Asian geopolitical traditions that could sustain regional order, despite these challenges.

Rather than balancing or bandwagoning, Southeast Asia’s response to China’s rise is one of engagement. Even though a powerful China is worrisome, the region does not see it as a threat that warrants a posture of security dependency with extra-regional powers. ASEAN’s response to the Indo-Pacific construct is openly cautious. It prefers to engage with, rather than isolate China. Given several member countries’ historical experiences with China over several centuries, there is less suspicion of a Chinese hidden agenda. China also engages individual ASEAN members on a one-to-one basis, which minimizes suspicion in the region.[4]

The history of ASEAN-China relations falls into three phases—hostility, friendship, and uncertainty. Phase three became more challenging, and culminated in 2012, when the issues of the South China Sea began to affect ASEAN-China trust. However, ASEAN’s strategic norms of behavior, known as the ASEAN Way, prioritizes consensus and non-confrontational bargaining. The latter depends largely on discrete and informal negotiations, often more successful on a bi-lateral, rather than a multilateral platform. Therefore, China’s accommodation of the ASEAN Way facilitates one-on-one engagement with member nations, as an ideal tool for building trust and confidence in the relationship.[5] Furthermore, this mechanism does not contradict China’s peaceful co-existence policy.

The ASEAN Way is not without its challenges to the security community. Many ASEAN-based regional security frameworks involve all member nations, as well as extra-regional powers. The strategy includes many stakeholders, the main objective being to develop friendships rather than to identify enemies. Engaging China despite territorial claims and sovereignty issues in the South China Sea is how Southeast Asia as a region manages challenges.

The international media has also fueled increasing global unease with BRI projects, its use of Chinese workers in the countries and the lack of spillover from Chinese investments. Also, a “twisted” interpretation of growing bilateral trade between China and Malaysia describes Malaysia as being overly dependent on China to drive its economic growth. This observation is inaccurate. Malaysia, like other ASEAN members, prioritizes intra-regional over extra-regional, bilateral trade. The ASEAN nations contribute up to 27.1% of Malaysia’s total trade, while China contributes only 16.7%.[7] Therefore, the China factor as a “demonizing” and disruptive regional player is inaccurate.

ASEAN perceives the Indo-Pacific as exclusionary and aimed at isolating China. Indonesia especially sees it as a strategic coalition of external powers which sidelines ASEAN considerations. As a result, Indonesia has developed its distinct response (ASEAN Outlook on the Indo-Pacific, 2019) which describes an ASEAN-centered, China-engaging Indo-Pacific. This approach is based on the principles of consensus-building, focused on normative (not universal), political and diplomatic solutions to disagreements. The document does not use any military-strategic terminology.

By contrast, the Quad terminology used to justify the Indo-Pacific construct is laced with hegemonic messages. The Quad-led version of “free and open Indo-Pacific” points to an overt military-strategic orientation. The Indonesian-led version seeks an “open and inclusive Indo-Pacific”. The US uses “free” and identifies the Indo-Pacific with its domestic political openness and democracy. This deliberately puts the Quad definition at odds with China, with its centrally driven political and economic system. Indonesia uses “open” and “inclusive”, and is meant to be accommodating of China, despite these differences.

The Indonesian-led document avoids any strategic language and does not mention any country, major power, or security clauses. This is consistent with ASEAN’s comprehensive security approach, which prioritizes maritime cooperation, connectivity, sustainable development, and economic cooperation. ASEAN’s notion of the Indo-Pacific strengthens existing mechanisms already in place. The intention is to preserve the agency of ASEAN rather than coercing it to big power demands.

Both the Quad and ASEAN visions for the Indo-Pacific mention freedom of navigation. ASEAN, however, brokers itself more as a consensus-builder. This is crucial amidst rising bilateral tensions between the US and China. ASEAN’s strategy also suggests that the region must “own” its unique strategic vision, with it as a central player in regional geopolitics.

[4] ASEAN Secretariat. 2003. “Joint Declaration of the Heads of State/Government of the Association of Southeast Asian Nations and the People’s Republic of China on Strategic Partnership for Peace and Prosperity”. asean.org

ASEAN’s Engagement with China: A Pragmatic Alternative to the Quad’s Eurocentric Strategy