An Action Plan for the Rohingyas of Myanmar

What does the current situation in Myanmar imply?

First reports of the trouble in Myanmar (Burma) may have given the impression that this was another routine ethnic or inter-communal dispute of the kind commonly encountered in places like Asia and Africa. But when details of the events became clearer, it became apparent that the drama through which the Arakan (Rohingya) Muslims are living is not a simple communal conflict but a process extending much further, towards genocide and even ethnic cleansing. The situation’s gravity is increased by the fact that the Myanmar authorities seem to be inflaming the troubles.

Consequently it does not seem to be limited just to an attack by Buddhists on Muslims but rather a policy enjoying state supports. Myanmar’s ambassador in Cambodia has even announced openly that the Muslims do not belong to Myanmar and they should leave the country.

Even more important, the Myanmar head of state, Thein Sein, has declared that the only responsibility which the United Nations (UN) should assume in regard to the Muslims is to collect them into concentration camps and have them sent to other countries. The political meaning of such a declaration by a head of state is to make the Muslims target for all state institutions, the security forces, and the Buddhist majority. It was almost the start rocket for genocide. This approach is reminiscent of the genocides in Bosnia Herzegovina and Ruanda in the first half of the 1990s. Just as the Serbs and Croats in Bosnia Herzegovina tried to exterminate the Muslim Bosniacs and the Hutus tried to wipe out the Tutsis in Ruanda, so now the Burmese Buddhists in Myanmar view the Arakan Muslims as people who must be got rid of. The message going out to the Arakan Muslims is for all of them to depart from the country or be killed.

Does the international context help to marginalize and intimidate the Burmese government to stop the ethnic cleansing?

Another misfortune for the Arakan Muslims is that the international conjuncture is completely against them. Myanmar has long had very close relations with its neighbor China. Its other large neighbor India is also developing its relations with Myanmar in order to counter-balance China. Myanmar has been a member of ASEAN since 1997 but because that organization’s other members all have problems with their own minorities, it does not ask questions about Myanmar’s policies towards minorities. The Western countries have normalized their relations with Myanmar following various reforms which it carried out after 2010. The USA established diplomatic relations with Myanmar at the start of this year and the countries of the EU have lifted the economic sanctions which they had applied to it. Myanmar is very strategically important for the eastern Indian Ocean and at a time when all countries seem to want to get on well with it, its authorities have been emboldened sufficiently to try and liquidate the Muslim community.

What steps can be taken to put an end to the persecution of these people in Myanmar?

First and foremost, the Arakan Muslims live under threat to their lives. The first step has to be to end violence incidents against the Muslims here. The government of Myanmar may claim that they are just part of an inter-communal dispute between Muslims and Buddhists but the situation is clearly reminiscent of state-supported ethnic cleansing.

It is not because of the weakness of the state in Myanmar that the Muslims are exposed to violence: they are being directly targeted by state-supported Buddhist militias. Consequently the Arakan region must be opened up to the rest of the world and seen more clearly. Independent international media organizations and international human rights organizations need to be able to operate freely in the region.

The second step is to get humanitarian assistance to the Arakan Muslims, both those in Myanmar itself and those in Bangladesh. International aid organizations must urgently go into action in the Arakan region under the supervision of the United Nations. The fundamental problem for humanitarian aid there is that the Myanmar government is not opening up the Arakan region to the rest of the world, while the government of Bangladesh is not permitting aid to reach the camps where the Arakan refugees live because it fears that this might cause an influx of more refugees.

Thirdly, the Myanmar government has to be convinced that basic rights, including citizenship, must be given to the Arakan Muslims. It seems that the Myanmar government does not want the Muslims to live in the province of Arakan which is of great strategic importance for the western coast of Myanmar. Furthermore this appears to be the common view held not just by the military government but by all Burmese Buddhists. Aung San Suu Kyi, the Nobel Peace Prize-winning leader of the opposition has remained silent about the tragedy of the Muslims and this is an indication that even if there is a transition to democracy, not very much will change in the situation of Myanmar’s Muslims.

What role can Turkey bear regarding the preservation of the basic rights of these people in Myanmar?

It would appear difficult to get the Myanmar government to abandon its policies of trying to wipe out the Muslims until a strong country exerts direct political pressure on Myanmar or there is an effective international intervention. Turkey’s relations with Myanmar are virtually non-existent. Until now there have been virtually no political or economic relations between Turkey and Myanmar. Ankara only opened its embassy in Myanmar in March 2012 as part of its new Asian strategy. Myanmar still does not have an embassy in Ankara. Consequently the role which Turkey might be able to assume regarding this topic is one of leadership in mobilizing international organizations and efforts to have this tragedy stopped.

The priority must be to mobilize bodies such as the UN, the EU, the Organization of the Islamic Conference, and ASEAN. International human rights organizations such as Amnesty International could take a more active role in the process. Beyond that, there could be one on one discussions with state officials of countries which are capable of exerting pressure on Myanmar, notably the members of the UN Security Council and they could be asked to go into action to halt this human tragedy. Despite all that is happening, Turkey should use constructive language with the Myanmar government and should only try to force that country to take positive steps by going through international organizations.

Is it possible that growing public awareness worldwide on the severity of the tragedy taking place in Myanmar may indeed compel the international community and organizations to take action at last?

How is that possible to inspire the global public, including Muslims and non-Muslims as well for the sake of the humanitarian aspect of the issue, to exert pressure on Burmese government?

When seeking the support of international public opinion, objective legal language must be used, taking human rights as its reference point. Muslim solidarity may be invoked in order to boost the support of public opinion in Islamic countries. But if discourse of this kind is used internationally and as a result the problem is perceived as a clash between Buddhists and Muslims, there can be no doubt that the non-Muslim world will sympathize with the Buddhists. It is sadly a fact that in the aftermath of the 9/11 attacks Muslims have had an image problem in many parts of the world. Furthermore in many of the countries which could put pressure on Myanmar such as China, India, and the United States, Islam is a minority religion. If radical organizations link with terrorist connections such as al Qaeda and ISIS, were to launch attacks in Myanmar, then all the sympathy now felt for the Arakan Muslims would evaporate and they would be left to their fate vis-à-vis the central government.

Because the problems which the Arakan Muslims have to ensure are sufficiently tragic in terms of basic human values, all that is necessary is to get the support of international opinion is to bring to attention the human dimension of the problem. In order to dispel the perception that this is a clash between Buddhists and Muslims, there needs to be dialogue with the world’s leading Buddhist religious figures and provocative anti-Buddhist expressions need to be carefully avoided. Calls from Buddhist religious leaders to the Burmese Buddhists to show moderation will be much more effective in stopping the violence against the Muslims than any reaction coming from the Muslim world.

For how long will the persecution last, or to rephrase, is there any light at the end of the tunnel for Rohingya Muslims?

Unfortunately, it does not look likely that there is an instant overnight solution to the problems of the Arakan Muslims. Reaching a solution may take months or even years. What is important in this situation is to keep the support of international public opinion alive. So some sort of institutional follow-up mechanism needs to be created to keep the problems of the Arakan Muslims firmly on the agenda. Otherwise when international interest has abated, the Myanmar government may resume its oppression against the Muslims. So a platform or initiative for the Arakan Muslims needs to be established at the United Nationals or at least within the framework of the Organization of the Islamic Conference. 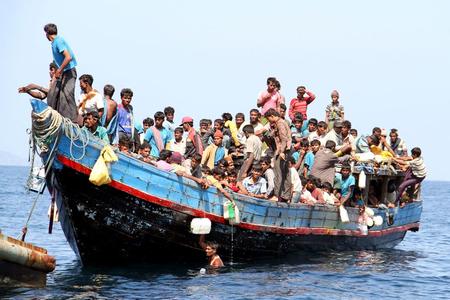