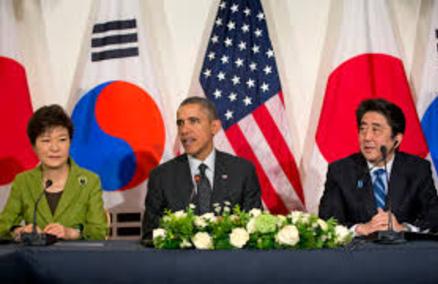 Japan and South Korea have been the two main U.S. allies in Asia since the early years of the Cold War. Today, the U.S. still maintains military bases housing thousands of its troops stationed in both countries by virtue of bilateral military-alliance agreements signed separately with Japan and South Korea in the aftermath of WWII. That said, Japan and South Korea have not even been able to develop a sound bilateral relationship yet, let alone form an alliance together. The essential reason for such a persistent lack of progress in mutual relations is the lasting memories associated with the immense degree of suffering that was inflicted on Korea by its former colonizer, i.e. Imperial Japan, before and during WWII. As a matter of fact, these two U.S. allies went so far as to deny each other official recognition between 1948, when the Republic of Korea (later to be known as South Korea) was founded, and 1965, when mutual relations were ultimately normalized. Apparently, even a fatal combination of the rapid spread of communism throughout Asia and the breakout of the Korean War did not suffice to bring the leaders of these two resentful nations together.

Intense pressure by Washington had finally culminated in Tokyo’s recognition of Seoul as the sole legitimate government of Korea. Japan also payed Korea post-war reparations worth $800 million and conveyed a formal apology to its former colony in 1965. Park Chung-hee, the President of South Korea at the time, was therefore able to make significant gains for his country by securing Japan’s economic aid and cooperation. As for Japan, it was pleased to have normalized its relations with South Korea, even if such groundbreaking progress was only made possible due to intense U.S. pressure. Tokyo even acknowledged the key importance of preserving South Korea’s security for Japan in the Joint Communique of 1969, which was signed between Sato and Nixon. However, political relations between Japan and South Korea did not improve much throughout the Cold War despite such major steps in the right direction.

The pursuit of a trilateral alliance

Building a three-way alliance between Japan, South Korea, and the U.S. remains a priority objective that is high on Washington’s strategic agenda. Washington’s insistence on such an alliance is particularly driven by widespread concerns over two essential security risks. The most salient risk emanates from an ever-recalcitrant North Korea. Since it left the negotiation table at the Six Party Talks in 2009, Pyongyang has been concentrating on the development of weapons of mass destruction (WMDs) and ballistic missile programs in order to intimidate the international community. The three countries that North Korea regards as its archenemies – thus sees no harm in uttering occasional threats against – are South Korea, Japan, and the U.S. Therefore, Washington considers a trilateral alliance with Japan and South Korea a crucial military strategy to deter North Korea.

The implicit and rather long-term consideration behind the U.S. push for a trilateral alliance is China’s rising profile. As far as the strategic task of balancing China’s boosted military capacity is concerned, the U.S. views the persistent lack of any formal military cooperation between its two leading regional allies as an embarrassing sign of weakness. Besides, the political distance between Seoul and Tokyo offers Beijing a larger radius of action. South Korea is particularly caught between the U.S. and China, i.e. its main military ally and largest trade partner respectively. Therefore, strained relations between Seoul and Tokyo pose an obstacle to the larger U.S. security strategy in Asia, which has the counterbalancing of China at its core.

What essentially hinders any tangible attempts towards political cooperation between Seoul and Tokyo is the fundamental issue of “comfort women”. A large number of young women, the majority of whom were from Korea, were forced to serve as sex slaves for Japanese troops during WWII. Seoul has long been demanding a formal apology and compensation for the living relatives of the victims. On the other hand, Tokyo claims that the apology it conveyed and the reparations it paid in 1965 also accounted for the specific issue of “comfort women”. Japan and South Korea were eventually able to reach an understanding on this issue as well, again thanks to U.S. efforts to soothe escalating tensions between its two regional allies. Through a U.S.-brokered deal that was sealed on December 28, 2015, Japan formally apologized to South Korea for the “comfort women” practice of its military during WWII, and agreed to pay $8.3 million in the form of compensation to the living relatives of deceased victims. In return, Seoul has withdrawn domestic as well as international lawsuits concerning the “comfort women” issue, while agreeing to remove a statue that was erected right across the Japanese embassy’s front door in Seoul in remembrance of the victims.

At this point, we need to emphasize the crucial role of strong leadership in all three countries concerned. U.S. President Obama has been referring to himself as “America’s first Pacific President” since the moment he came into office. Within this framework, he is well known to have declared Asia-Pacific affairs to be the primary focus of American foreign policy. Japanese Premier Shinzo Abe has given priority to the strategic objective of boosting Japan’s effectiveness at the regional level and beyond amid the deterioration of its relative capacity vis-à-vis that of China. Further, South Korean President Park Geun-hye is the daughter of Park Chung-hee, who established diplomatic contact with Japan for the first time in 1965. She boasts a strong public image, granting her a considerable degree of political influence within the country. Thus, the top leaders of all three countries concerned enjoy sufficient capacity and determination to take initiative, as far as the tedious task of building a three-way alliance between them is concerned.

The major stumbling block preventing the agreement that was signed between the governments of South Korea and Japan from being carried into effect is the mediocre public support behind mutual reconciliation efforts in both countries. While the Japanese public views South Korea’s demands as unnecessary and extreme, the South Korean public is far from being satisfied with Japan’s pledges, which they believe are insufficient. As a matter of fact, two-thirds of the South Korean public is against the relocation of the statue in front of the Japanese embassy in Seoul. On top of that, President Park Geun-hye’s party lost its parliamentary majority with the general elections that were held on April 13, 2016. Even if this electoral defeat can be attributed to the underperformance of the economy, it is regarded as a handicap as far as the implementation of the recent deal with Japan is concerned. Likewise, there are people in both countries who approach Washington’s mediation with suspicion, claiming that this will make it even harder for the agreement to materialize.

Another problem that may further exacerbate the already-strained relationship is the dispute over a set of islets known as Dokdo and Takeshima in Korean and Japanese respectively. As a matter of fact, these islets consist of coral reefs, shoals, and rocks that are largely uninhabitable – thus devoid of any economic value by themselves. Yet the unresolved dispute in question has managed to steal the spotlight once again, thanks to the revelation that even such marginal maritime formations may indeed be prescribed their own exclusive economic zones (EEZs) extending 200 nautical miles from the territorial sea baseline in accordance with the improvements in the law of the sea that have been made throughout the past 60 years or so. Therefore, similar disputes over maritime territory and islets stir heated debates between numerous nations more frequently than before. In the case of Dokdo/Takeshima islets, Japan maintains its territorial claims despite South Korea’s de facto control over the islets. In this respect, Japan’s renewed emphasis on its claim of sovereignty over these islets in the Diplomatic White Book that was published in April 2016 has provoked a South Korean reaction. That said, Seoul and Tokyo strictly refrain from allowing this particular dispute to jeopardize their overall diplomatic relations. However, the Dokdo/Takeshima dispute comes into play as an additional factor that adds fuel to the flames whenever any sort of friction emerges in the course of bilateral relations between the two nations. It is a particularly sensitive issue for decision-makers in Seoul, as the Korean public tends to leap at the rare chance of expressing their historical grievance against Japan by way of modern-day debates over territorial sovereignty.

To conclude, it doesn’t seem likely that Tokyo and Seoul will overcome their deeply-engrained antipathy towards each other in the name of establishing a sound partnership, which would probably evolve into a full-fledged alliance in the long run. The key to success in such a painstaking endeavor lies in the ability of the top leadership in both countries to justify the recent inter-governmental deal before their domestic audiences, which remain largely skeptical. As both countries are run by democratic regimes, implementing an agreement against the majority’s will would not be viable. In that regard, to what extent the latest initiative that has been launched by Obama, Park, and Abe will manage to gather public support in both countries within a short span of time is of utmost importance. If relations between Seoul and Tokyo cannot be fully normalized until the end of 2016, the realization of a trilateral alliance between the U.S., Japan, and South Korea will possibly be adjourned sine die.