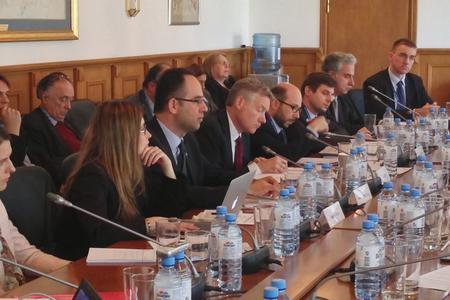 Turkey's Attitude Toward Crisis Between Russia And Ukraine

Ankara’s attitude toward the gradually-escalating crisis between Moscow and Kiev rests upon sensitive balances between various interrelated dynamics taken into consideration with all their complexity. In this respect, Turkey’s overall policy is being shaped by an endeavor to bridge its pragmatic interest with its moral principles at large.

Turkey approaches the crisis from a moral perspective focusing on the principle of territorial integrity. The UN Charter guarantees sovereign states’ territorial integrity and disaffirms intrusions by means of military invasions. After 1945, no UN member state dared to annex any territory of another member state. Ukraine’s sovereignty and territorial integrity were officially recognized by Russia and all other UN members right after Kiev joined the UN in 1992 as an independent state. Territorial disputes between Israel and Palestine, as well as the Kashmir dispute between Pakistan and India date back to the foundation of the states in question, and could not be resolved yet. On the other hand, Russia did not claim any right over Ukrainian territory from 1991 until 2014. Moreover, it overtly recognized Ukraine’s sovereignty and territorial integrity through various international treaties.

Acting in concert with NATO and the EU

Another agenda item of priority which Turkey holds in high esteem is acting in concert with NATO and the EU. NATO qualifies as a useful security umbrella under which Turkey feels the support of its allies in the face of any sort of security risk. Ankara’s first move, when confronted with threats caused by the Assad regime in recent years, was to receive the support of its NATO allies. In a volatile and potentially hostile regional context, NATO stands out as an indispensable asset for Turkey especially considering that instability is on the rise in Syria, Iran bears the potential to develop nuclear weapons, and Russia may once again adopt an expansionist policy line. Therefore Turkey will comply with NATO’s ultimate strategy against Russia with respect to the crisis in Ukraine.

Nevertheless, the fact that there is no clear consensus between NATO members upon what kind of an attitude will be adopted in response to Russia’s policies toward Ukraine makes it easier for Turkey to adopt a flexible approach. While Eastern European countries such as Poland, Romania, and the Baltic Republics argue for the adoption of a harsh attitude, others including older NATO members such as Turkey, Germany, France and the U.K. favor prioritizing diplomatic initiatives. At the end of the day, it is obvious that military intervention and harsh economic sanctions are not viable options and therefore out of question.

Europe’s need for reducing its energy dependence on Russia in the aftermath of the Ukrainian crisis led to an endeavor to develop new policies in this regard. Such a gradual policy shift at large can also reinforce energy cooperation between Turkey and the EU. After the Russo-Georgian war in 2008, the Ukrainian crisis of 2014 once again reminded Turkey of the risks of being overly dependent on Russian energy. Turkey will probably precipitate its efforts to alter its current supply chain with the aim of sustaining its long-term energy consumption, and will also seek new ways to provide Europe with an alternative energy corridor for the latter to reduce its reliance on Russian gas.

Energy cooperation has already become the most important dynamic of bilateral relations between Turkey and Israel with the initial signs of normalization recently. Ankara seems willing to use Israeli gas for satisfying Turkey’s own need, as it also aims to transport Israeli gas to Europe. The exploitation of Eastern Mediterranean gas fields can establish a ground for the Greek Authority in Southern Cyprus which is experiencing an economic-crisis nowadays to act more constructively during negotiations with the Turkish Republic of Northern Cyprus. Operating and transporting the energy reserves in the Eastern Mediterranean, when considered together with the fact that Turkey will start supplying water to Northern Cyprus through a pipeline soon, can jointly serve as a precursor of convergence between the two parties.

Holding to relations with Russia

While Turkish-Russian relations have significantly improved in the last couple of years, economic integration between the two countries has also gained depth. Political contacts between Turkey and Russia reached the highest level in terms of both cooperation and intensity. Unpleasant memories of the centuries-long rivalry between Ottoman Turkey and Tsarist Russia are a matter of the past, and are no longer a hot agenda item. In this respect, the fact that Russia is Turkey’s second largest trading partner today is not a coincidence. Moreover, social contacts between the peoples of the two countries have reached an amazing level today. The reciprocal lifting of visa requirement made it easier for millions of Russians and Turks to visit each other’s country every year. Under current circumstances, Russia qualifies as the most important regional partner for Turkey. Even the fact that Ankara and Moscow adopted two different approaches, which are diametrically opposed, indeed, toward the Syrian crisis, could not prevent the improvement of bilateral relations.

Ankara does not believe that supporting Ukraine’s territorial integrity in principle will harm its relations with Russia. In this regard, the recent decision by the state-owned Turkish Airlines to continue with direct flights to Crimea after a short pause by 14 April 2014 carries a political meaning beside its economic undertone. Likewise, the fact that Turkey does not join the EU even in its mildest sanctions against Russia can be assessed as a sign of Turkey’s unwillingness to downgrade its relations with Russia.

Defending the interests of Crimean Tatars

Another condition which must be fulfilled in Ankara’s view is the preservation of the acquired rights of Crimean Tatars. Russia made several promises to Turkic Tatar community pertaining to the preservation and even furthering of their rights before and after the annexation of Crimea. These promises include ascribing Tatar language an official status alongside Russian and Ukrainian, and the high-level representation of Tatars within the ranks of regional government and civil service. However, to what extent Russia will keep its crisis-time promises and whether given rights will be divested is a whole different subject. In this respect, Crimean Tatars, the only native people on the peninsula, look Russia with suspicion. They want to be a part of a Ukraine which is integrated with the EU. If Moscow puts pressure on Crimean Tatars and force them to immigrate, this may lead to a problem in Turkish-Russian relations. Turkish public viewed the ongoing crisis in Ukraine with discretion until now. Turks also do not wish their commercial relations with Russia to deteriorate due to the crisis. However in case Russia begins pursuing policies which violate the acquired rights of Crimean Tatars, Turkish public’s attitude may evolve into a backlash leading to popular demands for the reconsideration of Turkish-Russian relations.

Another solid reason why Turkey preferred to stay in the background during the ongoing crisis between Kiev and Moscow is Ankara’s willingness to adhere to the Montreux Convention Regarding the Regime of the Turkish Straits. The convention dates back to 1936, and regulates the passage of naval warships bearing the flag of Black Sea-littoral states, as well as the passage of non-littoral state parties’ warships, through the Turkish straits. This regime took Soviet Union’s concerns into consideration when it was established, while it also vested Turkey with utmost authority, thereby adjusting a sensitive political balance. Therefore Ankara does not wish to see the decline of the current maritime regime over the Black Sea because the Montreux Convention rests upon a delicate Turkish-Russian balance. Turkey strongly emphasized the Montreux regime back in 2008, when American naval warships were expected to enter the Black Sea in the name of solidarity with Tbilisi in its war against Moscow. Ankara once again displays similar sensitivity on the crisis in Ukraine. Ankara firmly refused Moscow’s claim that American warships USS Taylor and USS Truxtun stayed in the Black Sea for a time period exceeding the 21-days limit set by the Montreux Convention.

All in all, Ankara built its policy with regard to the crisis in Ukraine on extremely sensitive balances. On the one hand, Turkey is emphasizing Ukraine’s territorial integrity as a matter of principle; and on the other hand, it spreads on effort to avoid undermining bilateral relations between Ankara and Moscow which have a multi-dimensional character today. That is why Ankara consciously prefers to stay in the background amid the ongoing crisis.