Turkey’s Contemporary Silk Road Project and China’s project named ‘One Belt and One Road’, or the ‘Silk Road Economic Belt’ (SREB), are providing both sides with great opportunities. Indeed, the construction of the ‘Contemporary Silk Road’ has been a matter of debate since early 1990s, but the project is yet to be put into effect. However, new initiatives concerning the integration of the new Silk Road region gained currency in the recent year. The two countries which seem the most eager in this regard are Turkey and China.

The subject of ‘Contemporary Silk Road’ was discussed at length by Turkish and Chinese experts during two recent meetings that I attended. Cooperation in the Silk Road region was the main headline covered by the seminar which was held jointly by the Center for Strategic Studies of the Turkish Ministry of Foreign Affairs (SAM) and the Shanghai Institutes for International Studies (SIIS) on 11 December 2014 at Ankara and a symposium organized by SAM and the Chinese Academy of Social Sciences (CASS) on 18 December 2014 in Beijing. Even though the name of the project is virtually an old one, the project itself is still not brought to maturity. There are as many differences in opinion as there are convergences regarding the framework and the implementation of the project. Even basic priorities attached to the project vary greatly among different countries involved. Within this scope, I want to share with you my opinion regarding the benefits that Turkey, China, and other regional countries will be able to derive from the Silk Road project in case it is actualized, and the potential fields of cooperation between the countries in question.

However, there are also major projects brought forward by Turkey that have not been realized yet. Problems such as the lack of intra-regional cooperation in Central Asia, the limited economic capacity of Turkey, and the inadequacy of the transportation infrastructure throughout the region have made it difficult for Ankara to enhance collaboration with the regional countries further. From this perspective, projects which will enhance regional economic integration and create a zone of prosperity covering the whole region are urgently needed.

China’s Interests in Pushing for the SREBThe project is quite important in the sense that it will definitely boost China’s soft power capacity. Increasing mutual understanding is quite critical in order to create public awareness concerning the project in relevant countries. For that purpose, increasing mutual understanding among governmental institutions, media, and think-tanks is incredibly important. Moreover, educational exchanges and people-to-people contacts will also help facilitate the necessary environment for the project to flourish.

As far as the economic dimension of the project is concerned, it is important to underline that China has excessive amounts of domestic savings which need to be invested abroad. With the help of the SREB, China will have an opportunity to channel those savings into related projects from which it will derive considerable benefits in the long-term. In the end, the collective development of regional countries will contribute dearly to the Chinese economy.

China, as the second largest economy of the globe, has the capacity to play the leading role in the project. At the same time, China has also a responsibility to contribute to regional/neighboring countries’ development.

The increasing economic capacity of the regional countries with the help of the SREB will in turn contribute to the rising of living standards of the citizens of those countries. Besides, creating a common zone of prosperity will help eliminate the cultural barriers among regional people. It is important in the sense that correcting certain misunderstandings can enable regional countries to settle political and social problems in the future.

Areas of Cooperation under the Silk Road Project

1. Cooperation in transportation and infrastructure development

The largest obstacle to enhanced regional trade and in-depth economic cooperation is the inadequacy of the infrastructure. Building new railroads and highways, establishing efficient airline connections, and setting up a regionally integrated transportation network will be very important steps in that regard. The improvement of the transport infrastructure will not only promote intra-regional trade, but also accelerate the pace of development for the Silk Road countries. Rapid development and decreasing unemployment rates will facilitate the creation of a common regional zone of prosperity.

2. Cooperation in the energy sector and the mining industry

China is among the world’s leading countries in renewable energy generation. And it can provide significant support in terms of establishing renewable energy facilities in both Turkey and other regional countries.

China also has voluminous experience, and harbors advanced technologies in the field of mining. Therefore it can make significant contributions in reducing the safety risks, and in increasing productivity in the mining sectors of Turkey and other regional countries. Again, contracts can be awarded to Chinese companies which are willing to develop mineral deposits.

People-to-people exchanges between the Silk Road countries are still at an insufficient level. It is necessary to facilitate the free movement of people who wish to travel between Silk Road countries to conduct business, receive education, or for touristic purposes. Again, cooperation in the field of cultural industry – television, music, arts, cinema, and sports – can be promoted. In order to increase public awareness concerning the Silk Road vision, a mutual fund can be created to support movies and documentaries with relevant themes.

The border and territorial disputes between the countries of the region can be categorized as the traditional security issues. Distrust between neighboring countries also makes it particularly difficult to improve security cooperation between regional countries. Moreover, the lack of an organizational framework covering the whole region undermines regional countries’ ability to settle disputes among them. Each regional organization like CICA, SCO, the Eurasian Union, ECO, the Turkic Council, etc. has its own particular agenda which makes it harder to discuss and resolve regional issues in a comprehensive and consistent manner.

The stability of Afghanistan is of great importance for the security of the Silk Road region. Turkey will continue to play a key role in Afghanistan in the post-2014 period. The bilateral security agreement that was signed in September 2014 between Afghanistan and the United States is of great importance, as the ‘Resolute Support Mission’, consisting of non-combatant troops primarily from NATO countries. If Turkey deploys 1,000 soldiers within the scope of such an international force, it would be providing with the second or third largest number of troops to Afghanistan. The continuation of Turkey’s support for sustained stability, at least to a certain extent, in Afghanistan as a responsible partner in the country’s future is very important, even if the total number of foreign forces deployed in the country is limited.

On the other hand, China’s support to Afghanistan will also contribute dearly to the country’s political stability and economic development. The fourth Foreign Ministerial Conference of the Istanbul Process on Afghanistan, which focused on the subject, was held in Beijing on October 31, 2014. The preservation of Afghanistan as a fully sovereign state which can maintain stability within and along its borders is of vital importance for the development of transit routes and the successful establishment of a common regional economic zone within the framework of various project aimed at rejuvenating the Silk Road.
Non-traditional security challenges are also on the rise throughout the region. International terrorist groups, illicit networks, human trafficking, arms smuggling, and narcotics all constitute a serious threat to countries in the region. A joint roadmap to fight against terrorism and trans-border crimes should be determined by regional countries and intra-regional solidarity should become the new norm if such threats are to be countered effectively.

As it is seen, from the perspective of Turkey, China, and other regional countries as well, the SREB is not only a rewarding project but also an indispensable one. The SREB offers a wide array of opportunities for the Silk Road countries as it will allow them to obviate serious risks by joining forces and utilizing their comparative advantages. In this respect, it is very important for all the countries of the region to focus on areas of cooperation within the framework of the project, and put their shared vision into practice in a constructive manner without a moment’s delay. 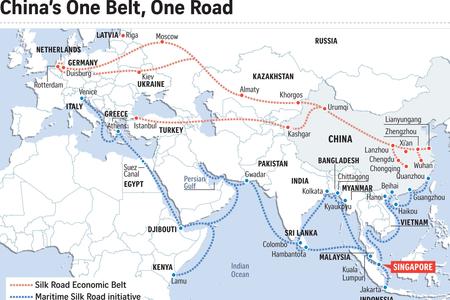