In this respect, Turkey is one of the countries seeking to improve its economic and trade relations with Taiwan without eliciting a response from China. However, Ankara has not generated a clear framework through which to develop its relations with Taipei. As the representatives of Turkish think-tanks, we made an exploratory trip to Taiwan on 20-24 October 2013. During our time in Taipei, we visited the National Security Foundation, the Prospect Foundation, the Institute of International Relations at the National Cheng-Chi University, the Chung-Hua Institution for Economic Research, the Mainland Affairs Council, and the Turkey Trade Office. Moreover, the Turkish delegation was approved by Minister of the Council for Economic Planning and Development Chung-Ming Kuan, Deputy Foreign Minister Simon S.Y. Ko, and National Security Council Advisor Yi-Hua Kan.

This visit was a good opportunity to understand the current state of relations between Turkey and Taiwan, and to understand the expectations about bilateral relations. First of all, Ankara has recently sought to improve its relations with Taipei without breaking its developing relationship with Beijing. As Turkey has seen Taiwan as a part of China since 1971, it desires to develop relations with Taiwan as an autonomous region of China. In this respect, within the “one country, two systems” framework advocated by Beijing, Turkey aims to maintain its relations with Taiwan officially at the same level with Hong Kong. Therefore, Turkey will refrain from any steps which could mean recognizing the Republic of China in Taiwan as an independent political authority.

On the other side, it can be said that Taiwan is pursuing a pragmatic strategy to develop relations with Turkey, as it does with many other countries around the world. The nationalist Kuomintang party returned to power in 2008 and has chosen to officially use the name “Republic of China” instead of “Taiwan”. This preference distinguishes the Kuomintang from the Democratic Progressive Party (DPP), that governed from 2000 to 2008 and the current opposition party, in that it accepts Taiwan as a part of “One China”, and not as an independent state. Therefore, while the Kuomintang government acknowledges the “One China Policy”, it has also stated that it will not start merger talks as long as the Communist Party is in power in Mainland China. However, Beijing and Taipei are in favor of an increase in cultural exchanges and tourism cooperation along with the economic and trade integration. As a result, from the point of economic integration and people-to-people contact, significant progress has been made since 2008. 1.5 million Taiwanese businessmen have invested in China and 40 percent of Taiwan's total trade was done with Mainland China. The number of Chinese visiting Taiwan reached five million in 2012. By the beginning of 2013 more than 600 weekly flights were carried out between China and Taiwan, and Chinese-Taiwanese mixed marriages had exceeded 320,000.

The next steps for Turkey-Taiwan relations

Four topics particularly stand out on the subject of developing economic relations between Turkey and Taiwan: abolishing visas, starting direct flights, opening of an Istanbul branch for Taiwan’s representative office in Ankara, and signing an FTA between the two countries.

An important development took place in May 2013 related to the abolition of visas. The visa requirement was not removed but they are now granted more easily. Ankara has made Taiwanese citizens eligible for electronic visas and does not require them to go to Turkish consulates to get a visa. Taipei, in turn, enabled Turkish nationals to get visas at the airport on arrival. In this way, the Turkish citizens’ entry to Taiwan and Taiwan citizens’ to Turkey has been greatly expedited. Mutual visits are expected to increase accordingly. If this initiative yields positive results, the next target will be the removal of visas completely. As of 2013, Taiwanese citizens benefit from visa exemptions in 134 countries.

Some of the issues targeted include developing bilateral trade relations between the two countries and encouraging Taiwanese companies to invest in Turkey. Taiwan has already chose Turkey as one of its primary markets for the period of2013-15. As of 2012, the bilateral trade volume had reached $2.2 billion. Considering the $3.9 billion trade volume between Japan and Turkey, the Turkish-Taiwan trade volume is arguably doing well. However, as with other East Asian countries, the emerging problem of Turkey's trade with Taiwan is that it is highly imbalanced – to the detriment of Turkey. In fact, of 2012’s $2.2 billion in bilateral trade, $1.9 billion was Turkish imports from Taiwan. In light of Taiwan’s competitive advantage, Ankara wants to compensate for this imbalance through tourism and Taiwanese investment in Turkey.

Moreover, uncertainty in bilateral political relations negatively affects mutual direct capital investments. The Ma Ying-Jeou administration is trying to reassure Ankara that advancements in Turkey-Taiwan relations will not upset Beijing, by claiming that Taiwan's relations with mainland China have been developing rapidly since 2008, and that Taipei and Beijing have a consensus about not breaking the status quo. This reassurance is necessary if Taiwan is to open an Istanbul branch of its representative office in Ankara. Taipei is drawing attention to the need for representatives in Istanbul, an economic hub, in order to ease trade and investment for Taiwanese businessmen in Turkey. So far, Ankara has been reluctant to take such a step out of concern for a potential response from Beijing. Taipei, however, points to its precedent of having multiple representative offices in several countries, such as the U.S., Germany, and Japan.

Also, Taiwanese businessmen claim that they are the most successful nationality investing in mainland China and that they can collaborate with Turkish businessmen in this regard. That is, Taiwan expects Turkey to see it as a gateway to China. In this respect, Taiwan is helping Turkish companies open to China more successfully while Turkey may potentially help Taiwanese businessmen open to Eurasia, the Balkans and the Middle East. Joint Turkish-Taiwanese companies could thus create successful projects in third countries.

Another step to improve trade between Turkey and Taiwan would be to sign a Free Trade Agreement (FTA). However, Turkey is a member of the European Union Customs Union, so Turkey is barred from signing a FTA with Taiwan unless the EU signs a parallel agreement. Currently, no such agreement is being negotiated.

Today, Ankara and Taipei are very determined to further develop their relations in the economic and cultural fields. Maintaining good dialogue with Beijing empowers Taipei to improve its relations with third countries. Ankara, recognizing this dynamic, is delicately exploring the balance between developing relations with China and taking advantage of Taiwan’s economic opportunities.

and his delegation at the Ministry of Foreign Affairs in Taipei on October 22, 2013. 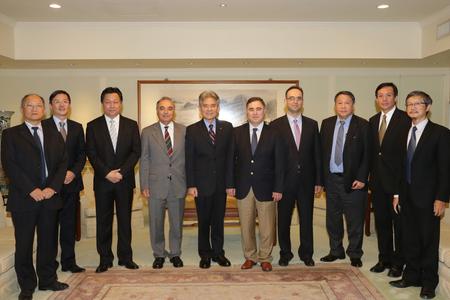