China’s Opening Up Towards Middle East

China opened up to the Middle East in a silent and systematic way, as it has previously done in different parts of the world. To maximize its economic expansion, Beijing has developed strategies to enhance political policies and economic profits by minimizing risks.

Chinese President Xi Jinping visited Saudi Arabia, Egypt and Iran on January 19th to 23rd, 2016. This visit coincided with a tense period between Tehran and Riyadh after a Shiite religious cleric was executed in Saudi Arabia and the Saudi diplomatic mission in Iran was attacked. This is remarkable sign of increasing influence of China over the region considering the polarization in the Middle East was at its peak. In this context, it is said that China’s policy regarding the Middle East relies mainly on energy, economy and the fight against terrorism.

China is highly dependent on foreign sources for energy. In 2015, China alone constituted one-third of the world’s demand. Gulf oil and safe transport have always been a sensitive issue for China. The preservation of peace and stability in the Gulf of Basra is very important for China’s energy security. Due to national interest, Beijing is primarily concerned with the potential conflict between Iran and Saudi Arabia. If necessary, Beijing vouches to undertake the role as a mediator between Riyadh and Tehran to prevent conflict.

China played a very constructive role in the negotiations between Iran and the P5 + 1 (UNSC’s five permanent members and Germany) over the problem of the Iranian nuclear program. Any attack from the United States or Israel against facilities in Iran due to the Tehran’s nuclear weapons program poses a great risk to China’s energy security. Although not obliged, China decreased its oil demand from Iran to 11% annually since 2012. This strategy delivered a meaningful message to Tehran to pursue conciliatory attitude in its negotiations with P5+1. China managed to revive the negotiating process and prevented the Obama administration from engaging in military actions against Iran. Therefore, it is not surprising that President Xi was the first leader to visit Iran immediately after the lifting of the UN embargo.

“One Belt One Road” (Belt-Road) project was announced by President Xi when he came to power in 2013. The project’s aim has been to revive the historical Silk Road from China. The Belt-Road initiative, like the historical Silk Road, covers the trade route of Asia, East Africa and the Mediterranean Sea. In addition to its energy resources, the region is significantly important due to its strategic location. The only region where land and maritime Silk roads intersect is within the Middle East. From this strategic perspective, President Xi visited Saudi Arabia, located on the Red Sea and the Persian Gulf, and Egypt, who controls the Suez Canal and is strategically between the Red Sea and the Mediterranean. President Xi also visited Iran, which is located on the strategic route of the overland Silk Road, plus the fact that it is a Gulf country. Several agreements have been signed by Saudi Arabia, Egypt and Iran for the Belt-Road project’s framework. However, Egypt and Iran’s infrastructure issues are vitally important for both states to increase their capacity of railways, highways, seaports and airports under the Belt-Road initiative. China seems to be an attractive partner for Iran and Egypt as it is case for other developing countries in terms of development of transport and industrial infrastructures.

The fight against terrorism

Furthermore, China’s concern with the Middle Eastern dimension is the increasing influence of extremist religious movements prone to violence on China’s Muslims. Beijing is concerned with the spread of influence from terrorist organizations such as al-Qaeda and ISIS over China’s Muslims and especially over Uyghurs. China has been cautious due to the increase of extremist tendencies specifically from separatist Uyghurs and Hui people (or Dungan), whose native language is Chinese and are more integrated into Chinese society.

The most important issue on Beijing’s terrorism agenda in the short term is the issue of the return of hundreds of Chinese Muslims, who went to fight for ISIS in Syria and Iraq. Beijing fears that their return would increase the possibility of terrorist attacks in the country. To add, Beijing has paid special attention to the fight against terrorism in talks with Middle Eastern countries. During President Xi’s visit to Saudi Arabia, Iran and Egypt, he signed joint memorandums of cooperation against terrorism.

China’s place in the rivalry between Saudi Arabia and Iran

Since the beginning of the Saudi-Iranian crisis, China has pursued the policy of neutrality and stated that the two countries could solve their problems through diplomatic channels. This policy seems to be quite logical considering that both Saudi Arabia and Iran are China’s largest oil suppliers.

Although Beijing is interested in the peaceful solution of the crisis between both countries, if obliged to make an inevitable choice between two, then it is expected that Beijing will stay much closer to Tehran than Riyadh. This is mainly because Saudi Arabia is a US ally and it also does not support China on its strategic issues with Iran. To add, Iran is a natural customer of China in the defense industry, whereas Saudi Arabia’s largest arms supplier is the United States. In terms of domestic economic potential and strategy, Iran is considered a long-term partner for China. Iran’s geopolitical location in the Belt-road initiative is more vital and indispensable for China. However, in order to balance this tense situation, President Xi initiated his Middle Eastern trip from Riyadh instead of Tehran and advocated both countries to sign the “comprehensive strategic partnership” agreement.

In conclusion, if China maintains its neutral policy within the tense regional conflicts in the Middle East, then it will succeed in becoming a preferred key actor in economic and political partnerships in the future. 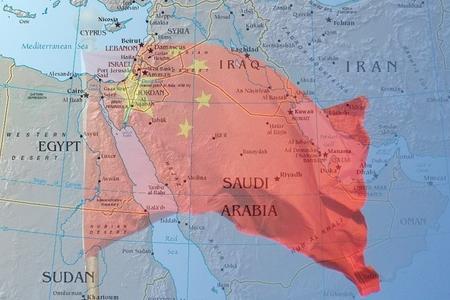