A feather has been added to the global history of economic integration at Tokyo where the Second Quad Summit was held, responsible for the announcement of establishing a new economic forum (the Indo-Pacific Economic Framework, or IPEF). There is no doubt that 14 nations including Australia, Brunei, Fiji, Japan, India, Indonesia, Malaysia, New Zealand, Philippines, Singapore, Thailand, South Korea, United States, and Vietnam have agreed in principle to be a part of the forum, but its working in come times is the biggest issue and challenge for all participating countries. The IPEF accounted for 40 per cent of the global GDP which is significant and has also bearing effect on the global economy in general and the Indo-Pacific region in particular [map 1].

There are three difficult questions to be looked at and have to be answer with logic. First, why has the U.S. the immediate need of such economic forum? Second, why 14 participating countries have agreed to it? Third, what is in it for the participating nations?

The emerging of an initiative carried out by the United States is another vista for global economy to face news opportunities and creating more challenges. The question does arise is the IPEF be remained a myth or proved to be a reality. There are two arguments for initiating the IPEF. First, this will strengthen the existing economic partnership among the participating economies. Second, this initiative is being taken to counter the Chinese increasing economic and political power in the global world in general and the Asia-Pacific region in particular. The major issues to be taken are enhancing resilience, increasing the degree of sustainability; promoting inclusive [distant dream] economic growth; raising business opportunities; and promotion of fairness and competitiveness among the countries in the Indo-Pacific region. Added to these, there could be the possibilities for strengthen supply chain pillars [sine-qua-non], inculcating trust [lacking among the countries of the region] creating more transparency and adhering to timeliness. In the present scenario, all above issues are of paramount significance and may serve the better and effective cause for the Indo-Pacific region.

On the other side of it, there is an issue that the IPEF will not cover is the free trade agreements (FDIs) under IPEF. This is a disturbing issue to be looked at, as trade is always part of economic framework. The joining of India as part of IPEF is of paramount importance in the region. This is because India opted out from both mega trade deals in the Asia-Pacific region (The Trans-Pacific Partnership, or TPP; and The Regional Comprehensive Economic Partnership, or RCEP). This is a difficult and challenging path for India for coping with the economic and political pressures of U.S. led IPEF. It is a marriage of convenience between India and U.S. led IPEF.

Another opinion which has come up from the economists across the world is the reclamation of economic leadership in East Asia, because the growth center of economy has been shifted from the West to the East. Accordingly, the all-major issues and challenges are coming up from the East.

In a recent press conference in the context of IPEF, U.S. National Security Adviser Jake Sullivan has opined that expending U.S. economic leadership in the Indo-Pacific through vehicles like IPEF is good for the American workers and businesses as well as for the people of the region (Indian Express, May 25, 2022). Sullivan observed further that the challenges that IPEF will have to look at include preparing the required rules in regard to the digital economy; ensuring secure and resilient supply chains, promoting the required amount of investment necessary for the availability of clean energy infrastructure as well as transition sin-qua-none for accelerating the pace of economic and social development in the region. There is immediate need for enhancing the existing standards for creating more transparency; fair taxation and dealing with the existing degree of corruption.

Similarly, U.S. Secretary of Commerce Gina Raimondo also said that IPEF signs an important turning point in restoring the U.S. economic leadership in the region and presenting Indo-Pacific countries, an alternative to China’s approach to these critical issues. (Indian Express, May 25, 2022).

Corner stones of the IPEF

As of now, there are four key areas that are the major part of the IPEF wherein all members have to cooperate and enhance the existing degree of cooperation further.

First is the trade [engine of growth for the region]. It includes digital economy along with emerging technology, labor commitments, the environment, trade creation and its effective and productive facilitation, enhancing the degree of transparency and effective and efficient regulatory practices, corporate accountability; maintaining the standards in regard to cross-border exchange of required data in terms of flows and localization.

Second is Supply Chains. The main purpose of second corner stone is the development of supply chains mechanism/ agreement for the resilience of the region. It is argued that this will be first of its own kind and will explore and protect from disruptions and this is the need of the hour.

Third is clean energy. The region has been facing the problem of de-carbonization. The participating nations are of the view that there is an immediate need for an agreement in relation to “high-ambition commitments” which are the missing link. This may include renewable energy targets, abolition of carbon purchasing commitments, improvement in energy efficiency standards and evolving the new modes and techniques for combating methane emissions.

Fourth is taxation and corruption. This is comprised of the measures relating to the exploration, inaction and enforcement the effective and efficient methods to avoid money laundering, bribery and other related issues that are hampering the values of American system and people.

Expansion of the Forum

As of now, the IPEF is only on paper. The 14 participating countries are yet to start the process of transforming IPEF into reality. These nations have to take the concrete steps in respect of   negotiations, which is the next step of transformation. This is a time-consuming process. The United States is trying hard to convince more countries to join IPEF. The most significant thing which the United States categorically clear that IPEF is not a free trade agreement, and not even any other kind of old trade agreement. This has more flexibility on terms of pillars and negotiation mechanism. There is a clarity of thought that all negotiations among the participating countries will revolve around the given four corner stones of the IPEF. Every participating country have to sign up all the four corner stones of the forum i.e., all segments within the four pillars. Nevertheless, they are not required to participate in all corner stones.

India and the IPEF

In order to protect its own interest, India has shown its willingness to join the forum despite its concern over certain issues. The most significant issue is the data localization. In recent years, India has different opinion and did not agree with the U.S. In 2019, the Indian Government had introduced a bill in the lower house (Lok Sabha). According to this bill, India has a provision on two fundamental counts namely- framework for the localization of Indian data and creation of Data Protection Authority (DPA). The United States has been opposing it. According to the U.S. officials, the proposed data localization requirements, wherein then firms require to store the data with the country (India) will serve as important barrier to the promotion of global digital trade in general and between the United States and India in particular. Added to this, will also act upon market access barriers, especially for the smaller firms.

In the fitness of things and environment, India kept to itself on this occasion and did not show any displeasure or discontent at the Tokyo summit. This is realty a wise and timely action on the part of India. Accordingly, India pointed out that the Forum is a declaration of collective will to make the region an engine of global trade and economic growth.

What is in the IPEF for India?

The trade economists opined that for India, which had walked out from the RCEP after eight years of deliberations become a part of IPEF. They believe that it has become inevitable due to the room of on Asia treading arrangements, and is a way of overcoming the image India as the protectionist country. In 2021, India has taken a U-turn concerning its antagonism with respect of bilateral trade agreements. In order to improve its image further, India has deal with the UAE and is in the process of trade deal with UK in 2022.

Another argument come forward is that India feels that the IPEF is of non-specific and more flexible in both nature and contents, hence mire suits to India. Added to these, India’s inclusion in IPEF is also comes due to the exiting geopolitical scenario wherein emergence of China is biggest threat to India. It is true that China has a virtual control on Asian trade. On the other side of it, India’s inclusion in IPEF is of paramount significance for Japan, Australia, and United States.

Under the present scenario, India may not be an ideal member for IPEF, bit its exclusion from the IPEF may raise a vital and strategic question, how is it called the Indo-Pacific Economic Forum in true sense and spirit. However, it is pointed out here that India is the only nation from South Asia, which has been invited to the forum.

China and the IPEF

It is undisputed fact, that China deeply hurt by the United States led initiation of creating economic bloc. This is also an open fact that this forum is created to counter the Chinese increasing economic and political power in the Indo-Pacific. China has gone further that United States is in the process of building “Asian NATO” (The Hindus, May 29, 2022).

Nevertheless, the United States appears to making the deal more about the benefit to the U.S. economy as compared to the Indo-Pacific region as a whole. The coming time will tell how will it work for the benefit of the participating countries or otherwise.

Map 1. The GDPs of IPEF Countries 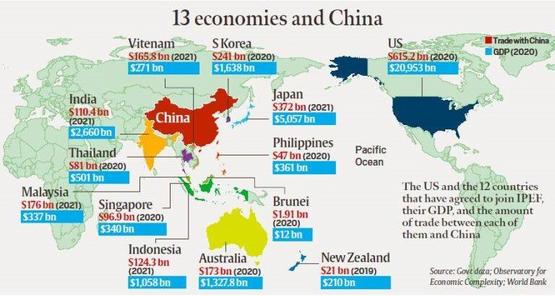