The Turkey-Poland  Workshop organized by ​the Center for Strategic Studies of the Turkish Ministry of Foreign Affairs (SAM) and the Polish Institute of International Affairs (PISM) on December 2, 2015 in Ankara 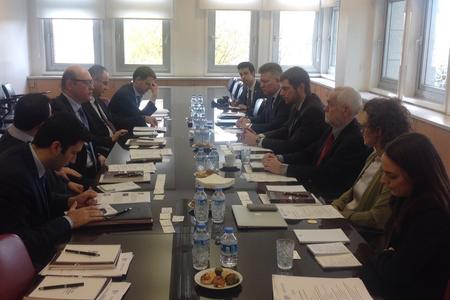 The relationship between Turkey and Poland dates as far back as the medieval ages with diplomatic ties between the two nations being established back in 1414. Six centuries of bilateral ties have culminated in a deep-rooted tradition of cooperation and amity. Poland became an ally of Turkey with the former’s accession to NATO in 1999. Finally, Ankara and Warsaw upgraded their relations to the level of a “strategic partnership” with an agreement they signed on May 14, 2009.

Still, neither party is content with the current situation of bilateral relations, hence both seek to further consolidate mutual ties. For this purpose, the Center for Strategic Studies of the Turkish Ministry of Foreign Affairs (SAM) and the Polish Institute of International Affairs (PISM) held a joint workshop on December 2, 2015 in Ankara during which time the two sides addressed the pressing issue of how to improve bilateral cooperation within the context of rapidly shifting regional and global balances. Turkey-EU relations, cross-border migration, the Syrian crisis, Russia’s “predatory” foreign policy, and China’s ‘One Belt One Road’ (OBOR) initiative were also among the agenda items that were handled by the two parties with an eye to their particular national perspectives on the occasion of the workshop.

Poland’s view of the Russo-Turkish Crisis

Polish representatives at the workshop pointed to Turkey’s long held resolve in avoiding any steps that could escalate tensions with Russia, exemplified in its adoption of policies aimed at appeasing Russia during the Ukrainian and Crimean crises of 2014, both of which had their roots in Ankara’s refusal to take part in a renewed round of Cold War-esque polarization. In this sense, the representatives are curious whether the recent downing of a Russian jet along Turkey’s Syrian border can be deemed indicative of Ankara’s renouncement of its former policy of appeasement. According to the Polish representatives, the various policies that have been put into place by NATO and the EU against Russia over the last couple of years were far from deterring the latter in an effective manner. As to the issue of extending NATO or EU membership to Ukraine, Moldova, and Georgia, the West is yet to develop a clear and consistent strategy.

On the other hand, with its operations against Georgia and Ukraine in 2008 and 2014 respectively, Russia gradually began to fill the power vacuum resulting from the hesitance towards if not outright abandonment of these countries on the part of NATO and the EU. Moreover, Russia retains leverage over the West through the “frozen conflict” concerning the status of Moldova’s breakaway region of Transnistria. According to the Polish representatives, Moscow stepping in to fill a similar power gap in the Eastern Mediterranean and Syria should be seen as no coincidence at all. In this respect, Turkey became the first NATO country that was able to stop Russia’s military expansion as demonstrated by its recent downing of a Russian combat airplane which violated its airspace.

Poland comes first among those European countries backing Turkey’s accession to the EU. From the viewpoint of Warsaw, Ankara’s EU membership bears promise in a primarily strategic and political sense, rather than as a result of its potential economic yields. With Turkey’s accession, Poland would be relieved of its burdensome role as the easternmost state of the EU. This would also pave the way for the subsequent admissions of Ukraine, Moldova, and Georgia into the Union.

According to Warsaw, it would further sustain efforts to balance Moscow should Ankara firmly side with the Western Bloc. In that regard, Warsaw is pleased to observe the latest episode of rejuvenation in Turkey-EU relations even if the recent convergence of interests between Ankara and Brussels is essentially stemming from the Syrian refugee crisis.

China’s ‘One Belt One Road’ Initiative

Poland is also pleased with China’s recent proactivism in Europe as far as associated economic initiatives are concerned. Beijing has already been organizing annual summits with 16 Central and Eastern European Countries (CEECs) for years. The fourth China-CEEC Summit was held on November 24, 2015. Eastern European countries are also competing among themselves to attract more Chinese investment. In this respect, the ‘One Belt One Road’ (OBOR) initiative is considered by Poland as a constructive enterprise that will allow the empty space between China and Europe to be filled, while also boosting the cumulative economic prospects of all participant nations. Therefore Warsaw’s approach to China’s Silk Road projects closely resembles that of Ankara.

Here, Turkey also views China’s OBOR initiative as an economic opportunity that will grant it access to the lucrative markets of Central Asia, the Caucasus, and South Asia while contributing dearly to the enhancement of transportation infrastructure within its own borders. Neither Ankara nor Warsaw give much credit to concerns voiced by some countries that China may be attempting to establish its hegemony over the vast region that falls within the OBOR’s associated projects’ scope all under the guise of a collaborative economic initiative. Besides, due to their particular geographical locations, Turkey and Poland aren’t necessarily uncomfortable with China’s rising profile in the international arena.

Economic and commercial relations between Poland and Ankara are also progressing rapidly. As of 2014, their bilateral trade volume amounted to $5.5 billion, with Polish exports to Turkey accounting for $3 billion, hence making Poland 20th on the list of Turkey’s largest trade partners.

Both countries are faced with similar economic challenges, such as a shortage of research and development spending and a lack of sufficient innovative vigor as far as upstream industries are concerned. Thus, both are struggling to evade the so-called middle income trap. The two nations, which are friendly and allied, are looking forward to enhancing cooperation in strategic fields such the defense industry. Due to their reliance on energy imports, Poland and Turkey are seeking ways to streamline their efforts to develop sufficient capacity in the field of green energy technologies such as wind and solar power. As a member of the European Space Agency since 2014, Poland further believes in the viability of cooperation with Turkey in the aerospace industry.

To sum up, collaboration between Turkey and Poland has gained substantial momentum in multiple and crucial fields ahead of the 602nd anniversary of the establishment of bilateral diplomatic relations between the two nations.