Turkey–U.S. Alliance: Between Past and Future 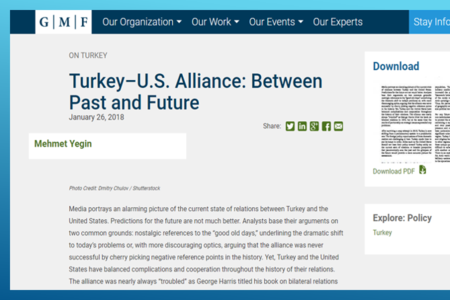 Media portrays an alarming picture of the current state of relations between Turkey and the United States. Predictions for the future are not much better. Analysts base their arguments on two common grounds: nostalgic references to the “good old days,” underlining the dramatic shift to today’s problems or, with more discouraging optics, arguing that the alliance was never successful by cherry picking negative reference points in the history. Yet, Turkey and the United States have balanced complications and cooperation throughout the history of their relations. The alliance was nearly always “troubled” as George Harris titled his book on bilateral relations in 1972, but at the same time the merits of partnership on strategic issues superseded any problems.

After surviving a coup attempt in 2016, Turkey is now shifting from a parliamentary system to a presidential one. The foreign policy repercussions of these domestic matters are challenging at best. Turkey needs time to put its house in order. Allies such as the United States should not base their policy toward Turkey solely on the current state of relations. A broader perspective that panoramically sees the past and the glimpses of the future would provide a more accurate picture for assessment.

Both countries benefited from the alliance during the Cold War, but both also eagerly cooperated in the postwar period in the Gulf War, Bosnia, Kosovo, and Afghanistan. As a country with a majority Muslim population, Turkey’s participation in the U.S.-led military coalition efforts is also crucial, as it has increased the political legitimacy of the campaigns. Teamwork between the two countries in early phases of the newly independent Central Asian states and Arab uprisings was also quite valuable for both sides. Thus, the partnership took positive steps in a variety of geographic areas and included not only military but also political terms.

For any future U.S. grand strategy — other than neo-isolationism — Turkey will be important, either to prevent the emergence of a regional hegemon or in containing a successful one in Persian Gulf, Eurasia, and even possibly East Asia. In spite of Turkey’s presence and credibility in the Middle East having been undermined to a certain extent, Turkey is still a significant actor that has undoubtable leverage in the region. Turkey has a strategic position, and its ethnic and religious background provides a political influence to other regions, reaching to the heart of Asia. Due to these unique qualities, the United States would find it difficult to substitute Turkey’s strategic contributions with another country or non-state actor’s assistance. There is no match for Turkey among the U.S. allies in the Arab world in terms of state and social capacity. Military assistance from the Kurds would be limited to the operational sphere — supplying combatants and bases in a limited area could never contest the political reach of Turkey. Thus, there is no question that Turkey and the United States should maintain a positive partnership, as it will be valuable for both countries in the future.

Public Commitment to West and Values

Contrary to the general perception, Turkish society is actually not drifting away from the Western values and is, on the contrary, concerned about the course of fundamental values of the Turkish Republic with a strong quest for preservation of secularism. About the low favorability ratings of the United States, and anti-Western attitudes, there is a need for action.

Firstly, Turkish citizens want Turkey to be a member of the European Union. According to the Economic Development Foundation (IKV), one of the leading institutions in Turkey on EU research, the percentage of Turks that favor EU membership has increased to 78.9 percent in 2017 from 61.8 percent in 2015,  a record high number in the last decade. These numbers are very telling, considering that responses are generally evenly divided according to partisan lines in Turkey. More striking is the fact that in the same poll, 34.5 percent stated the reason behind their support as an expectation for enhanced democracy and human rights in the country.

Secondly, there is an increasing concern among Turkish citizens about the foundational values of Turkish Republic established by Mustafa Kemal Atatürk, primarily secularism as an important common value with the West. According to Metropoll’s “Turkey’s Pulse” poll, the support for the secular state even among supporters of the ruling Justice and Development Party (AKP) has reached 61.1 percent with a net 9 percent increase from January 2015 to August 2017. The overall support reached to 71.8 percent in 2017, which is visible in public sphere. A patriotic song associated with Atatürk and his secular legacy, the Izmir March with its famous line “long live Mustafa Kemal Pasha long live” became popular again. The march has been commonly chanted at football stadiums, basketball halls, and nearly everywhere people gather. The number of visitors to Ataturk’s Mausoleum has reached record number of 6.7 million in 2017.  This phenomenon made such an impact that the ruling party made a strategic move of embracing Ataturk in order to tame the political wave.

Thirdly, the low favorability ratings of the United States in Turkey are a voiced irritation in Washington but there has yet to be a response. The U.S. State Department and government officials are disinterested in their counterparts’ use of anti-American rhetoric for its domestic audience unless a problem emerges in running day-to-day business. There are no allocated resources to general public outreach or efforts to connect and communicate with common people in Turkey. If the United States sincerely wants to address this problem, they must take action.

The Turkish public generally does not have a negative attitude toward American society or its values, but they are concerned about Washington’s policies. There is a real anger among Turkish people about U.S. relations with the Kurdish Democratic Union Party (PYD) in Syria and lack of assurances on Turkey’s territorial integrity. Without effective communication to the Turkish public, this antagonism will not go away. The good news is that the numbers can alter easily once alternative sources and channels provided for Turkish people’s access to unbiased information about the United States. U.S. officials and their Turkish counterparts should work together to provide unbiased information about the issues of convergence and divergence in bilateral relations.

Turkey’s recent rapprochement with Russia is watched closely by the United States. The United States and other NATO Allies see Turkey getting closer to Russia at the expense of its Alliance commitments. Purchasing S-400 missile systems from Russia that are not interoperable to NATO systems has created questions about Turkey’s long-term objectives. On the other hand, Turkey is regarding the issue as an ad hoc interest maximization in terms of its position in Syria and acquisition of air defense systems.

Not a long time ago, Turkey had to shoot down a Russian jet due to increasing violation of Turkish airspace and experienced the nadir of relations with Moscow. Mutual mistrust still exists in Turkey–Russia relations and ameliorations are highly fragile. Thus, this rapprochement has its limits — much less moving forward to a strategic partnership or an alliance alternative to NATO. Yet, it should be recognized that Russia has increased its influence on the issues regarded as a matter of survival in Ankara. Russian ability to shape the future of Syrian Kurds — on which the United States is at odds with Turkey — creates strong incentives for Ankara to get closer to Russia to increase its maneuverability.

Nonetheless, using Moscow to attract attention and get better deals in the West has reached its limits. As a result, Russia is getting disproportionately more out of the deal while Turkey is getting too little in return. For example, Operation Olive Branch, carried out by Turkish Armed Forces against the People’s Protection Units (YPG) in the Afrin region. The United States reacts to Turkey more than Russia in terms of Afrin, a place where Russian military personnel rather than American troops are stationed. What Turkey will get as a result of the operation is not clear yet, but Russia already secured permission to build second line of Turkish Stream gas pipeline and a chance to push for a rupture between two NATO Allies along with its strong propaganda machine.

Thus, a major component of Turkey–Russia rapprochement is the reflection of divergence in NATO and as a result the alliance loses including Turkey. Turkey’s NATO Allies should look through the lens of “us” to include Turkey versus Russia, rather than “us” versus Turkey and Russia. Lastly, it possible that Russia’s aim is to hurt Turkey and NATO’s credibility together and use the problems between Turkey and the Alliance as means to deny their unity and ability to render a coordinated strong response.

The Turkey–U.S. alliance was valuable in the past and has a strong potential to be valuable in the future for both countries. Despite the claims in divergence of values, Turkish citizens are willing to be part of the West and they are committed to the common values. Both the polls about unfavorable views on the United States and Turkey–Russia rapprochement are overblown. Thus, NATO Allies should develop a common perspective on Russia, especially on the strategic front. Despite the recent frustrations in its relations with the West, Ankara has structural links with the West, namely the United States, which cannot be broken simply due to the fleeting reluctance and neglect.