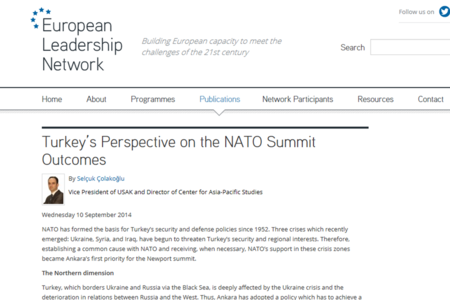 ​NATO has formed the basis for Turkey’s security and defense policies since 1952. Three crises which recently emerged: Ukraine, Syria, and Iraq, have begun to threaten Turkey’s security and regional interests. Therefore, establishing a common cause with NATO and receiving, when necessary, NATO’s support in these crisis zones became Ankara’s first priority for the Newport summit.

Turkey, which borders Ukraine and Russia via the Black Sea, is deeply affected by the Ukraine crisis and the deterioration in relations between Russia and the West. Thus, Ankara has adopted a policy which has to achieve a delicate balancing act in the region.

On the one hand, Turkey is acting in concert with NATO allies and the EU for the protection of Ukraine’s territorial integrity. In this regard, Turkey declared that it would not under any circumstances recognize Russia’s annexation of Crimea (Turkey is particularly concerned that the rights of Crimean Tatars, a Turkic-Muslim nation, are respected). More generally, Turkey is uncomfortable with Russia pursuing a strategy of southward expansion, first through the Russo-Georgian War of 2008 and then during the ongoing Ukrainian crisis as this serves to upset the Turkish-Russian strategic balance in the Black Sea region.

On the other hand, Turkey does not wish to harm its political and economic relations with Russia, which gained momentum in the 2000s. Around 55% of Turkey’s demand for natural gas is met by Russia. Since 2008, Russia has been Turkey’s second largest trade partner and is a significant market for Turkish exports and construction. Around 4 million Russian tourists visit Turkey each year.

Considering these realities, Turkey has designed its policy toward Ukraine as one balancing its desire to act in concert with Western allies while not damaging relations with Russia.

Another aspect of the Ukrainian crisis which deeply concerns Turkey is related to the preservation of the Montreux Convention [1], as Ankara does not wish to see the Black Sea become an area of high tension and polarization. Even during the Cold War era, Turkey did not feel the need to revise the Montreux Convention in order to receive naval backup from other NATO members in the face of the Warsaw Pact naval forces in the Black Sea.

The well-adjusted policy that has been pursued during the Ukrainian crisis enables Turkey to play the role of the facilitator between Russia and the West. In this respect, the appointment of a Turkish ambassador as the Chief Monitor of the OSCE Special Monitoring Mission to Ukraine came as no surprise. The most important step at this juncture will be ensuring a ceasefire agreement in Ukraine and initiating diplomatic negotiations between the parties involved.

In recent years, Turkey has been confronted with increasing security threats not only to its north, but also to its south. Turkey stands face to face with severe security risks due to the destabilization of Syria and Iraq. In the first years of the Syrian civil war, Turkey, like many NATO countries, supported the Syrian National Council (SNC) and its military arm, the Free Syrian Army (FSA), in its opposition to the Assad regime. However, radical groups such as the Al Nusra Front and the Islamic State of Iraq and the Levant (ISIS) began to gain power.

The civil war ravaging Syria and the sectarian policies of the Nouri al-Maliki government in Baghdad jointly sowed the seeds for the rise of ISIS. After consolidating its rule over the Anbar Province, ISIS captured Mosul. Its attacks against Turkmen villages and the territory of the Kurdistan Regional Government of Iraq (KRG) led to a spiral of violence and mass migrations. ISIS’s raid on the Turkish consulate in Mosul and its subsequent abduction of 49 Turkish diplomats on June 11, 2014, led Ankara to act more cautiously in implementing regional policies. Ankara did not carry out an armed intervention to protect Turkmen villages and the KRG, with which it has amicable relations, in order to avoid risking the lives of the Turkish hostages.

According to Turkey, a comprehensive action plan against ISIS which considers Iraq and Syria as a whole needs to be drafted. At this juncture, a fundamental step that needs to be taken in Iraq is the foundation of a truly representative and reconciliatory government in Baghdad. Therefore, Ankara supported the process of dismissing Maliki’s government and replacing it with a newly-formed consensus government. Likewise, in order to put an immediate end to the ongoing civil war, the Assad regime, which dragged Syria into civil war, needs to promote the formation of a government that would be comprised of moderate elements within the Ba’ath Party and the opposition. In this way, Sunni Arab clans in Iraq and Syria, which are excluded from the system and marginalized, can be motivated to stop backing ISIS and side with central governments.

In this regard, Turkey believes cooperation with NATO countries will play an important role in stabilizing Syria and Iraq. On the issue of the direct struggle against ISIS, Ankara expressed at the NATO Newport summit that it wishes to cooperate with NATO allies on intelligence sharing and on preventing ISIS militants from infiltrating Iraq and Syria via Turkish borders. However, Turkey believes that the provision of arms to the Iraqi army and the Peshmerga forces brings some risks. Arms can be seized by terrorist groups like the PKK and ISIS due to the chaotic environment and power vacuum in the region and this would in turn spawn grave new risks for Turkey and regional security in the forthcoming period. Therefore, eliminating the authority gap in Syria and Iraq by way of establishing consensus governments should be the first priority as opposed to solely pursuing military measures.

Turkey believes that NATO plays a constructive role in state-building in Afghanistan. Turkey announced that it will not withdraw its troops even though ISAF’s mission expires at the end of 2014. In this respect, the Alliance agreeing on a non-combat mission in Afghanistan post-2014 to help train, advise, and assist Afghan security forces is a positive step. Ankara wants to see other NATO members continuing their sustained support of Afghanistan’s security and economic development to preserve the gains made in Afghanistan and support the process of establishing a democratic nation. Turkey, like other NATO members, asked the two conflicting presidential candidates to swiftly deliver a peaceful outcome to the recent elections in Afghanistan, an outcome that would be welcomed by the Afghan people.

In conclusion, at the NATO Newport summit, Turkey had no major difficulties in general terms in agreeing with its allies on the approach that should be taken in response to the three critical crises in Ukraine, the Middle East, and Afghanistan. Now it is time to see how the agreed approach of the summit will be implemented.

[1] The Montreux Convention is a comprehensive diplomatic document that was brought into force in 1936. It puts in place restrictions on non-littoral countries of the Black Sea, with the aim of limiting their naval presence (i.e. quantity and quality of warships) in the body of water. It also fully authorizes Turkey to inspect all vessels passing through the Bosporus and the Dardanelles.

The opinions articulated above represent the views of the author(s), and do not necessarily reflect the position of the European Leadership Network or any of its members. The ELN’s aim is to encourage debates that will help develop Europe’s capacity to address the pressing foreign, defence, and security challenges of our time.