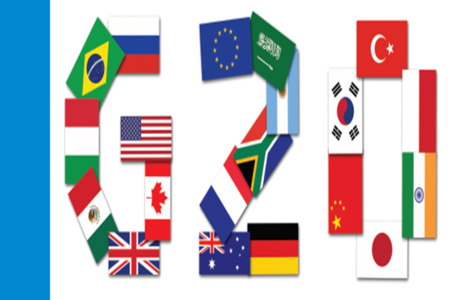 Rising powers have become more influential in global politics since the 1990s. Before then, the global economy could be conceived of as consisting of two parts: the rich north and the poor south. Yet as a result of the successful development of the so-called “Asian Tigers”(South Korea, Taiwan, Singapore and Hong Kong) and members of the Association of Southeast Asian Nations (ASEAN) in the 1980s and 1990s, as well as China’s move towards the center of the world economy, the structure of the global economy has undergone a profound transformation. In this respect, the G7, which is widely known as a club of the world’s richest countries, does not represent the true center of the global economy.

The establishment of the G20 in1999 can be seen as a concrete display of this change in the global economy’s center. Here, the G7, which represented only the world’s greatest economies, gradually lost its influence, thus making way for the emergence of the G20. Additionally, as the BRIC constellation (consisting of Brazil, Russia, India and China) became more and more prominent on the world stage, it even began to surpass the economic performances of some G7 countries. These different groupings within the G20, including BRICS as well as IBSA (India, Brazil, and South Africa) later came to the stage. What’s more, another formation dubbed “the G12”(consisting of the G7 and BRICS also came to the fore within the G20.From a global perspective, this G12 grouping aimed to form a more concrete platform of the 12 countries that had become great economic powers by today’s standards in order to handle global problems, and to guide the world economy.

Nonetheless, countries that could be considered middle powers such as Turkey, South Korea, Australia, Indonesia, Mexico, Argentina and Saudi Arabia, which are included in G20,have been excluded from the G12. Such a reality has led to a concern that these countries, which can be perceived of as strategically important powers in their respective regions and as rising economies overall, may be excluded from the newly emerging global economic and security structures. Such circumstances have forced these middle powers to act in unison with G20, the UN and other international organizations and formations.

Within this context, in September 2013 at the 68th meeting of the UN General Assembly five of the G20’smiddle powers declared their participation in a new formation termed MIKTA,which is the English acronym for its constitutive members, namely Mexico, Indonesia, South Korea, Turkey and Australia. Largely considered to be an informal and low-profile forum, MIKTA primarily aims to serve and protect the interests of its five members in the global arena. Although all countries of MIKTA are members of the G20 major economies, none are part of theG10 and it seems that this will remain so for the foreseeable future, despite their rapid economic growth rates.

The MIKTA formation represents the world from a geographical perspective. Australia represents the Pacific, Indonesia represents Southeast Asia, and South Korea represents North East Asia. These three countries are members of Asia-Pacific Economic Cooperation (APEC) and participants of the East Asian Summit organized by ASEAN. Turkey is both a European and Asian country, while Mexico is a Latin American county and at the same time a member of the North American Free Trade Agreement (NAFTA). Moreover, Indonesia and Turkey are members of the Organisation of Islamic Cooperation and are widely regarded as leading Muslim countries. Again, Australia can be considered as possessing a largelyprotestant social structure, while Mexico is predominantly Catholic. In South Korea, Buddhism and Christianity (both Protestant and Catholic) are believed to be ubiquitous. In this respect, MIKTA can be seen as a microcosm of the globe, representinga wide geography and exemplifying a multi-cultural character. Despite all their differences, the countries of MIKTA share a common commitment to democracy, the free market economy and fair global governance.

Another common feature of these five countries is that they have difficulties in making the West recognize their priorities, although they all share close strategic ties with the US and/or EU countries. Considering this, MIKTA stands as an independent way in which these countries can safeguard their global interests and priorities while also remaining a part of the global order that is determined by the West. MIKTA countries believe that they will be able to act as a unified mediator in global and regional disputes if they build the capability to act independently, especially from the US. In this regard, MIKTA countries take special care to develop their relations with non-Western countries, especially Russia and China.

One of the most ambitious countries of MIKTA is Australia.  Even more, its former prime minister and foreign minister, Kevin Rudd, can be considered as one of the founders of MIKTA.  According to Australia, the entire world is paying for the mistakes made by the great powers in their attempts to solve global economic and political problems. From this perspective, Australia contends that a system of global governance that protects the interests of middle and small states needs to be developed. Although Rudd’s Labor Party government has now been replaced by that of acenter-right coalition under Prime Minister Tony Abbott which happens to prioritize Japan and India over China, there is a general consensus among the Australian ruling elite that MIKTA is a beneficial instrument for Australian foreign policy.

Another enthusiastic defender of MIKTA is South Korea. For Seoul, which is caught between China, the US and Japan, and Russia when it comes to theNorth Koreadilemma and other regional problems, it is believed that MIKTA can provide it with new opportunities in foreign policy.

Mexico is troubled with extreme economic dependence on the US on the one hand, and Brazilian leadership in Latin America on the other. Yet, one of the biggest challenges that Mexico is facing is that it cannot properly defend its interests within NAFTA or the Trans-Pacific Partnership (TPP). From this perspective, MIKTA, which has the potential to exert influence from diverse corners of the world, can provide an opening for Mexican foreign policy.

Turkey, which is largely regarded as a cultural, geographic and historical bridge between Asia and Europe, has eagerly promoted the workings of MIKTA. With MIKTA as a foreign policy instrument, Ankara will be able to gain a greater maneuverability in its relations with the EU, Russia and the Middle East. Most importantly for Turkey, the formation would help the country on its mission to define itself as a middle power by aiding it in the formulation of more realistic and reasonable goals.

Finally, Indonesia has been the most reluctant party to MIKTA. Here, Indonesia is experiencing greater difficulty than Turkey in defining itself as a great or middle power. Although Indonesia is one of the world’s most important countries in terms of its geographical location and large population, its political influence and economic capability remain questionable. Yet, MIKTA’s common approach to the governance of global and regional issues is one of the main pull factors that draws Indonesia to the newly emerging constellation.

To what degree the MIKTA countries will be successful in establishing a shared vision and strategic position based on their common interests will determine the future of this formation. If these countries can cooperate and act in solidarity, MIKTA’s prestige in the international arena will rise, and subsequently, if new members are added to the formation, MIKTA could come to represent a solid platform from which middle powers may protect their interests.