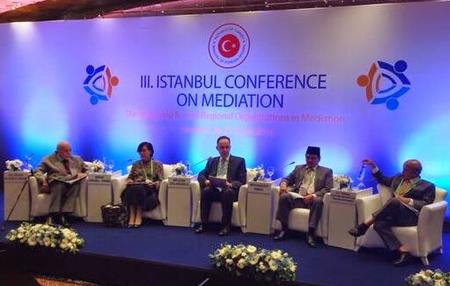 Hardly a day passes without a hot conflict breaking out in various parts of our globe. The Central African Republic, South Sudan, Syria, Iraq, and Ukraine are the latest examples of conflict zones where disputes between different ethnic and religious groups have culminated in hot conflict. Under such circumstances, the successful peace process between the Filipino government and the Muslim minority in the Philippines shines out. In this respect, the question of whether the ongoing peace process in Mindanao, the southernmost major island in the Philippines, can be concluded successfully, and whether such an experience can serve as a source of inspiration for conflicting parties all around the world, is a truly important one.

In addition to this question, the state of affairs concerning the Mindanao peace process and future prospects were discussed in detail at a panel meeting organized by the Turkish Ministry of Foreign Affairs on June 26-27, 2014. The conference was entitled "III. Istanbul Conference on Mediation", the third leg of a conference series on the theory and practice of mediation all around the world with each panel focusing on a key case. The Mindanao peace process was presented as a successful case in which mediation delivered results by the panelists, a number of whom were themselves leading the process. Prof. Miriam Coronel-Ferrer, the Chair of the Government of the Philippines Peace Panel; Mohaqher Iqbal, the Chair of the Negotiation Panel of the Moro Islamic Liberation Front (MILF); Tengku Dato Ab Ghaffar Bin Tengku Mohamed, the Chief Facilitator for the Government of Malaysia in Mindanao Peace Process; and Sayyid Qasim El-Masry, the Special Envoy of the Secretary General of theOrganization of Islamic Cooperation (OIC) for Peace in Southern Philippines, discussed the peace process from the day it was initiated up to now.

Progress in the process

The international community has always provided assistance to constructive efforts aimed at the resolution of the Mindanao conflict, and there has been no direct or indirect intervention by foreign actors trying to undermine the process. Regional organizations such as ASEAN and the OIC, as well as neighboring countries and great powers have been actively supporting the peace process. It was especially Malaysia and Indonesia, two Muslim-majority countries neighboring the Philippines, which after 1968 made significant contributions aimed at securing an environment of constructive dialogue between Manila and the Muslims of Mindanao. In such a fashion, despite some interruptions, significant steps were taken in accordance with the institutionalization and internationalization of the Mindanao peace process after 1996. Malaysia became a country facilitator in 2001. The International Monitoring Team (IMT), comprised of Malaysia, Libya, Brunei, Japan, Norway, and the EU was established in 2005. Finally, the first combined mediation initiative was seen with the participation of both states and NGOs in 2009. It was called the International Contact Group (ICG), and it included Japan, the UK, Saudi Arabia, and Turkey alongside four international NGOs (Muhammadiyah-Indonesia, The Asia Foundation-US, the Center for Humanitarian Dialogue- Switzerland, and Conciliation Resources-UK). As a result of such international mediation efforts, Manila and MILF signed the Framework Agreement on the Bangsamoro in October 2012.

The roadmap and implementation schedule

An elaborate roadmap and schedule were put together for the smooth implementation of the Mindanao peace process. The Framework Agreement of 2012 formed the backbone of the Comprehensive Agreement on the Bangsamoro which was signed on March 27, 2014. Political, security-related, and socio-economic measures are being formulated thanks to the Comprehensive Agreement on the Bangsamoro, which is expected to become fully effective by 2016. By this time authorities believe the resolution process will be completed in every respect, and all practical deficiencies will be remedied. In essence, attaining peace in exchange for allowing some degree of autonomy to the Bangsamoro region is the aim of all parties involved. Presently, the Bangsamoro Transition Commission (BTC) is being established for handling the transition process in question. As for the question regarding what constitutes the most critical ingredient of the peace process: it is the disarmament of MILF fighters one by one.

Despite all its complexity, and diversity of related mechanisms, the political consensus-building phase of the Mindanao peace process was successfully completed thanks to the constructive assistance and participation of the international community. The implementation phase that we are currently passing through can also achieve success in the case that all parties involved continue with their constructive assistance and maintain their positive attitudes.

That said, there are still risks which need to be mentioned with regard to the Mindanao peace process. First of all, the process preceding the agreement in 2012 was a product of an initiative undertaken by President Benigno Aquino III himself. It is uncertain whether Manila will continue to back the peace process if the government changes hands. There are examples in the country's past indicating that the process could be halted if a new government and president were to come to power and suspend relevant policies. However, experts are of the opinion that it will be difficult for any government in Manila to draw back in defiance of all international efforts and attention focused on the issue, unless MILF backs out.

Within a global context where regional conflicts and clashes are mostly entangled in a Gordian knot, the need to hear success stories is dire. The Mindanao peace process provides us with a success story that we can all make an inference from, as it demonstrates that progress and gains can be made through hard work. If the Mindanao peace process can be successfully concluded, such an experience will inspire efforts aimed at resolving similar tensions within ASEAN countries. In this way, beyond economic integration, the process of political and social integration among ASEAN members will be catalyzed in a manner resembling that of the past experience of the EU. The Mindanao peace process will furthermore motivate the international community to make an endeavor to overcome similar conflicts through dialogue and negotiation.

III. Istanbul Conference on Mediation, Panel on an Example of a Successful Mediation: The Mindanao Peace Process in the Philippines, 26 June 2014, Istanbul, Turkey

Can The Mindanao Peace Process End With A Success Story?