Turkey-Pakistan relations have always been maintained at a decent level and in a friendly manner. There have been three primary spheres of cooperation that characterize the relations between these two countries since Pakistan gained independence in 1947. First of all, both Turkish and Pakistani societies have a common cultural heritage whose roots are ingrained in history. There is no other way than this to describe the mutual sympathy that both societies have towards one another. In the past, each society offered assistance to the other when it was in need of help. For instance, Indian Muslims in the area known today as Pakistan helped the Turkish people during the Turkish War of Independence that took place directly after WWI. To give another example, Pakistan was one of the countries that offered the most assistance to Turkey after the 1999 Marmara Earthquake. Alternately, the Turkish people have also afforded the Pakistani people significant assistance after the disastrous earthquakes and floods that hit the country in the 2000s. There is no doubt that this solid friendship between the peoples of these two countries constitutes the most powerful aspect of Turkish-Pakistani relations.

Ankara and Islamabad also have a history of cooperation in the realms of foreign policy and security, having supported each other in order to defend their respective interests in the international arena. Since the Cold War period, Turkey and Pakistan have sided with the other’s approaches to the Cyprus and Kashmir issues. Additionally, strong relations have also been established between the Turkish and Pakistani armies in terms of defense cooperation. The third important sphere that characterizes Turkish-Pakistani relations concerns economic and commercial matters.

Currently, political relations and high-level contacts at the bilateral level are intensive as well. To date, almost every prime minister and president who has ever held office in either Turkey or Pakistan has paid the other a visit before the end of their term in office. Recently, Prime Minister Recep Tayyip Erdoğan visited Pakistan from December 23-24, 2013, while Pakistani Prime Minister Nawaz Sharif visited Turkey on the occasion of the Eighth Afghanistan-Pakistan-Turkey Trilateral Summit from February 12-15, 2014. However, the two countries have failed to build a comprehensive institutional framework that could coincide with the positive trajectory of their bilateral relations. To remedy this, relations between the two countries gained a structural form in 2009 with the establishment of the High Level Cooperation Council (HLCC) mechanism. The third meeting of the HLCC convened on September 17, 2013, during which over 40 documents were signed jointly by Pakistan and Turkey.

With this Council Turkey and Pakistan have gained the opportunity to develop common stances in international and regional affairs as well as to cultivate coordinated approaches in their bilateral relations. Facilitated by this platform, relevant officials from both sides can meet and propose potential areas of cooperation. In the near future, Turkey and Pakistan will need to consolidate their political cooperation regarding two issues.

First, a stable Afghanistan that is integrated into both the regional and global systems serves the interests of both Turkey and Pakistan. With respect to this aim, the Afghanistan-Pakistan-Turkey Trilateral Summits, which were launched in 2007, provide a meaningful framework. By maintaining these trilateral summits, all sides can develop a system of regional cooperation that observes the interests of each Ankara, Islamabad and Kabul.

Second, Turkey and Pakistan have been among the countries most negatively affected by terrorism in recent times. These two countries should undertake close cooperation in preventing and halting the activities of terrorist organizations with motives based on ethnic, sectarian and religious ideologies. The already existent relations between the Turkish and Pakistani armies and police can enable cooperation in this field to be expeditiously executed.

The extremely favorable atmosphere surrounding bilateral contacts on the political level is not mirrored in the two countries’ bilateral trade and economic relations. The fact that the economies of Turkey and Pakistan are not complementary in essence plays a large part in this reality. As a result, both the volume of bilateral trade and the flow of mutual FDI remain rather low. For instance, Pakistan ranks 68th on the list of Turkey’s trade partners, just after Jordan and Colombia, with a bilateral trade volume of $723 million in 2013. The decline in our bilateral trade volume from $1 billion in 2011 to this current level signifies a loosening of economic ties. Earlier, Turkey did not favor signing the Preferential Trade Agreement (PTA) with Pakistan because Ankara was worried that Turkey’s labor-intensive sectors – the textile sector in particular – would suffer. However, at this current juncture, Ankara and Islamabad both receive the idea of signing the agreement favorably, with the aim of lending impetus to bilateral relations. Yet while signing the PTA will mark an important step, it won’t be enough by itself. It should be reinforced with incentives targeting the private sector, and bolstered with people-to-people contact.

In this vein, there is a need to increase interaction between the peoples of Turkey and Pakistan as their inter-societal connection remains rather weak. The total number of visitors between the two countries does not exceed 50,000 annually. By promoting cooperation in tourism and education, the two countries can enhance the connection between their societies. Similarly, cooperation agreements between universities could accelerate the exchange of academics and students. It will not be easy to extend the capacity of the relations between these two countries without increasing the exchange of human capital.

Another basic reason why bilateral commercial and economic relations have not developed to a substantial level is due to the lacuna of a well-functioning logistics network between Turkey and Pakistan. The shortest and fastest way to transport goods between Turkey and Pakistan is the route across Iran. While Turkey, Pakistan and Iran constantly underscore their trilateral economic cooperation in the Baghdad Pact, the Regional Cooperation for Development (RCD) and the Economic Cooperation Organization (ECO), this trilateral economic cooperation and the logistical infrastructure have so far remained underdeveloped. At this point, the fundamental source of the problem is the substantial set of obstacles that Iran puts before the Turkish cargo vehicles carrying goods in transit to Central Asia, Afghanistan and Pakistan. Moreover, railroads connecting Turkey, Iran and Pakistan cannot be efficiently used for the transport of goods. In addition to the technical problems, a primary predicament here is that Iran levies high transit fees and additional taxes on Turkish vehicles and cargo trains. Recently, in mutual acts of retaliation in October 2014, both Turkey and Iran increased the fees for transit transportation which cargo vehicles must pay at customs, thus grinding the transportation of goods from Turkey to Turkmenistan to a near halt. Here, all affected sides should develop an institutional solution to this problem within the framework of ECO. If ECO cannot foster a liberalization policy on the free movement of goods among its members as has been done in the EU, it will end up turning into a vacuous organization.

All in all, Turkey and Pakistan are two countries that share a long-lasting and strong friendly relationship. It is necessary that these friendly relations promote a perspective for the future that is based on a shared vision, and if this is done, relations will continue to develop. However, the level of bilateral economic cooperation still remains well below what is expected and if the mutual friendship is not turned into an economic partnership, the desire for better relations will not be met. 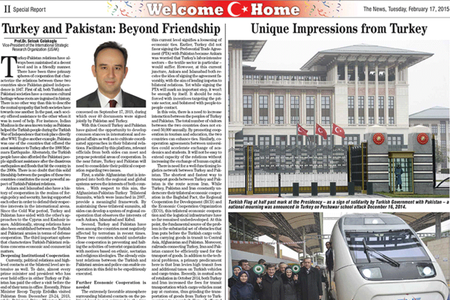 Turkey and Pakistan: Beyond Friendship