In which ways the relationship between a rising China and the U.S. will be shaped has been one of the most popular discussion topics for a while in Asia. It can be said that discussions mainly converge around three main approaches. There are the optimists who argue that due to their intense and vital economic ties, Beijing and Washington will not allow relatively minor political disputes between them to hamper the prospects of cooperation. The fact that both countries are permanent members of the United Nations Security Council and that they are both conventionally inclined to handle eventhe most serious of frictions on the international stage in a diplomatic manner further supports the argument posed by optimistic experts.

On the other hand, experts who approach the subject from a pessimistic perspective argue that in time, a rising China will inevitably pose a challenge first to American interests in Asia and then to Washington's core interests across the globe. This will increase the polarization between the two capitals andultimately compel Asian countries to side with either the U.S. or China.

According to Prof. Chi Su, who is the senior advisor to the Taiwanese President Ma Ying-jeou, Taiwan can play the mediator role between China and the U.S. Prof. Su stated during his speech at the International Strategic ResearchOrganization (USAK) on May 7, 2014, that Taiwan contributes to the resolution of problems between the two countries before things spin out of control, and helps toconvert diplomatic frictions into manageable differences, thanks to its extremely pragmatic foreign policy. According to him, Taiwan balances its deep economic relations with Chinavis-à-vis its strong political ties with the U.S. and Japan. While Taiwan is a piece of land worth waging a war over in the eyes of China, up until now Taipei has been successful in its continued endeavors aimed at averting the escalation of tensions between Beijing and Washington thanks to its commitment to pragmatic and reconciliatory policies.

Such a pragmatic policy line pursued by Taiwan in dealing with foreign affairs is also valid with regard to the dispute over the Senkaku/Diaoyu islands. While tensions occasionallyflair between China and Japan because of this dispute, Taiwan adopted a more moderate attitude with respect to its claims over the same group of islands. Without giving up its claim of sovereignty over the maritime region surrounding the islands, Taipei refrains from provoking Tokyo and avoids directly challenging its incessant and de facto control over the islands. Indeed, Taipei even signed a bilateral agreement with Japan in 2013 which grants the former fishing rights. While the fishing agreement does not resolve the sovereignty dispute over the islands, it does settle the entire dispute over fishing rights within the maritime region surrounding these islands. Moreover, the agreement addresses diplomatic negotiations as the sole channel for a final solution to the sovereignty dispute in the future.

Taiwan considers China as a window of opportunity in terms of economic promise. The annual trade volume between Taiwan and China is about $150 billion, with $70 billionconsisting of Taiwanese exports. Moreover, the stock of investment by Taiwanese businessmen in China amounts to $100-150 billion. The two countries are interconnected by around 800 flights per week between 10 cities in Taiwan and 60 cities in China. Every year, 3 million Chinese visit Taiwan, and 5 million Taiwanese visit mainland China. Over 300,000binational families have been started by intermarriage between people from Taiwan and China. As is apparent, China is an indispensable trade partner for Taiwan today. In this respect, the Taiwanese consider China in a pragmatic manner with their economic interests in mind. On the other hand, the Chinese consider Taiwan as an indispensable, integral piece ofterritory within the Chinese border, and all people living in Taiwan as Chinese nationals.

Even though Taiwan considers China as a land of opportunity, some Taiwanese are concerned that increased economic dependence on China could undermine Taiwan's political independence. Indeed, strong reactions were demonstrated bysome Taiwanese who were convinced that the inclusion of service sectors by the Economic Cooperation Framework Agreement (ECFA), reached between Taipei and Beijing,would narrow Taiwan's political elbow-room. Heated public reactions even led to the occupation of the Taiwanese parliament by university students last March.

Taiwan is trying to balance increased economic integration with China by reinforcing its security links with the U.S. Environmental Protection Agency (EPA) administrator GinaMcCarthy visited Taiwan in April 2014, thus qualifying as the first visit by a U.S. cabinet-level official to Taipei since 2000. The fact that this visit took place only two months after the first-ever direct contact (the so-called Wang-Zhang Meeting) between ministers from Taipei and Beijing in February 2014 is a clear indicator of the sensitive balance maintained by Taiwanese policy-makers. As it can be remembered, the Minister of Mainland Affairs Council (MAC) from the Taiwanese cabinet met with his Chinese counterpart, ZhangZhijun, in the city of Nanjing on February 11, 2014. Taiwan also pays special regard to the rejuvenation of its relations with Japan, as a security balance amid increased economic dependence over China will be easier to maintain through intra-regional cooperation supplemented by American assistance.

Even though Taiwan keeps a careful eye on its endeavor of balancing China's rise with enhanced security cooperation with the U.S. and Japan, frictions between Japan and China, or between the U.S. and China would mean trouble for Taiwan as well. In this respect, the ideal situation for Taipei would be the realization of a scenario in which Beijing establishes stable relations with both Washington and Tokyo based on mutual respect and trust. Taiwan will be able to thrust itself forward by emphasizing its economic promise and unique political role as a key country that can bind Beijing and Washington together with ease.

Can Taiwan mediate between the U.S. and China? 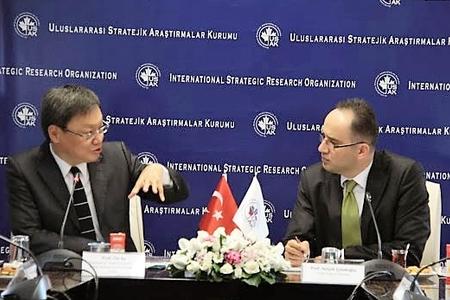