One of the primary issues of Turkish foreign policy has been Cyprus problem since the 1950s. The Turkish Council of International Relations (UİK) held “Fifth International Relations Studies and Education Conference” at European University of Lefke located in the Northern Cyprus between 19th and 22nd of April 2013. In this conference, one of the issues addressed by Turkish academics was the current situation of the Cyprus issue and Turkey-Northern Cyprus relations.

The development of Cyprus issue

Declaring its independence from the British colonial rule in 1960, the Republic of Cyprus had a constitutional system based on the political equality of Turks and Greeks. Although Ankara thought that the political equality of Turkish Cypriots was guaranteed with the 1960 Constitution of the Republic of Cyprus and Cyprus problem was solved, the issue acquired a new dimension when Greek Cypriots expelled Turks from the system by violating their constitutional rights. In this period covering the years from 1964 to 74, the Greek Cypriot Administration both forced Turks to migrate from the island through oppressive policies, and started preparations to unite Cyprus with Greece. Cyprus entered into a final process with the coup d’état of Nikos Sampson aiming to unite Cyprus with Greece. Not approving the entrance of Cyprus into the domination of Greece as a whole, Turkey made a military intervention in the island under her title of ‘guarantor state’ indicated in the constitution of Cyprus. Thus, Turkey secured the lives of Turkish Cypriots. In addition, the intervention of Turkey in Cyprus resulted in the association of the existence of Turkish community with a territory there. Living dispersedly across the land until 1974, Turks were mostly exposed to pressure by the Greek majority. After 1974, Turkish Cypriots made up majority in a part of the island for the first time.

The European Economic Community (EEC) who stayed indifferent position on violation of the constitutional rights of Turkish Cypriots between 1964 and 1974 reacted to the military intervention acted by Turkey in order to protect the constitutional rights of Turkish Cypriots. Indeed, Greece and Greek Cypriots that failed to comprehend the determination of Turkey for the maintenance of the existence of Turkish Cypriots paid a heavy price for that mistake. This is because; Turkish Cypriots started to enjoy self-governance under the umbrella of security provided by Ankara. Since the Turkish Federated State of Cyprus declared in 1975 was not approved by Greek Cypriots as a co-partner, Turkish Cypriots declared the Turkish Republic of Northern Cyprus (TRNC) in 1983 based on self-determination. Although it is not recognized by any country other than Turkey, TRNC has continued its existence so far by gaining more and more strength. Although the solution plan suggested by the UN Secretary-General Kofi Annan in 2004 was approved by the Turkish Cypriots, it was rejected by Greek Cypriots. Annan Plan showed to the world that the party not desiring solution in Cyprus issue was the Greeks, but not the Turks.

The negotiation position of Greek and Turkish Cypriots

EU is not a fair mediator

In Cyprus issue, the European Union (formerly EEC) has played a negative role by mostly supporting only the Greek theses through its policies and practices. The Court of Justice of the EU preferred to punish Turkish Cypriots without any valid and reasonable ground by imposing an embargo on the Northern Cyprus origin products in 1994. In 1997, EU announced Southern Cyprus, which had serious problems with its neighbors, as candidate country, which meant a conflict with its own principles. In 2004, Southern Cyprus was accepted as a member to the EU though it rejected the Annan Plan. In this way, EU fully supported the theses of the Greek Cypriots rejecting to consider Turkish Cypriots as an equal community.

The EU broke its promise that economic embargo would be abolished and financial aid would be provided to the Northern Cyprus if Turkish Cypriots supported the Annan Plan. In addition, it is unacceptable that the EU supports the negotiation of Greek Cypriots with Turkey, but not with Turkish Cypriots. Just like the EU does not recognize TRNC, Turkey does not recognize the Republic of Cyprus, either. Moreover, the fact that the full membership process of Turkey is extended over a long period of time and it is not clear what will happen at the end of the process affects the solution of Cyprus issue negatively. It is not possible for Ankara to leave the destiny of Turkish Cypriots to the hands of an organization to which Greece and Southern Cyprus are full members, but Turkey is not a member. However, the full membership of Turkey to the EU would enable many basic problems about Cyprus to be solved automatically because the borders of member countries would be removed actually.
Isolation applied to the Northern Cyprus turns against the Southern Cyprus

It goes without saying that the country closest to the Cyprus Island and having the strongest economy in the Eastern Mediterranean is Turkey. Establishing commercial and economic partnership with Turkey has become highly important in terms of national development and enrichment policies not only for Cyprus but also all other countries in the region. The embargo imposed by the Southern Cyprus and the EU for the collapse of the administration in the Northern Cyprus has not been effective so far. This is because; it is more than enough economically that the Northern Cyprus establishes commercial and tourism relations with Turkey. In 2012, over 11 million Turkish citizens went abroad. The arrival of only 2% percent of the people going abroad in Northern Cyprus enables the tourism industry to revive there. In addition, the sale of all agricultural and industrial products produced by the Turkish Cypriots to the 75 million-Turkish market is more than enough for the improvement of the Northern Cyprus economy.

On the other hand, the ships and aircraft of the Southern Cyprus cannot access Turkish ports constitute a disadvantage in terms of economic competition. Incapability of the Southern Cyprus to enter into economic and commercial cooperation with Turkey creates a serious cost for it in an environment where even Greece which imposed a strict visa regime on Turkey in the past makes attempts, due to the economic crisis, to make it easier for Turkish tourists to enter in Greece. The easiest way for the Southern Cyprus to overcome the financial crisis which it fell into last year is to normalize the relations with Turkey. This is possible only if the EU embargo imposed on the Northern Cyprus is removed. Otherwise, the maintenance of the current policies cannot bring any solution to the Cyprus issue. These policies even do more harm than good to the Greek Cypriots.

The UK has military bases in Cyprus. Why not Turkey?

It is not reasonable and just that the Southern Cyprus and Greece resist to the existence of Turkish soldiers on the island though they do not object to the existence of two British sovereign bases (Dhekelia and Akrotiri). It is not possible for Turkish Cypriots, who were exposed to the oppressive and violent policies of the Cyprus state under the control of Greek before 1974, to continue their existence on the island without the guarantee of Turkey. In addition, the closest mainland to the Cyprus Island is the Anatolian peninsula. In this respect, Turkey is uneasy about the existence of a hostile government in Cyprus in terms of its national security, too. If it desires, Greece, the other guarantor country, may establish a military base in the Southern Cyprus in order to protect Greek Cypriots. Keeping silent to the permanent British bases in Cyprus though objecting to the existence of Turkish army is a kind of double standard. This is because; both the Cyprus Island is very far from the United Kingdom, and there is no British Cypriots on the island. In this sense, demanding the withdrawal of Turkish army while allowing the existence of the British army on the island (with bases having a weak legitimacy) does not seem to be a reasonable demand.

What if no solution is reached? 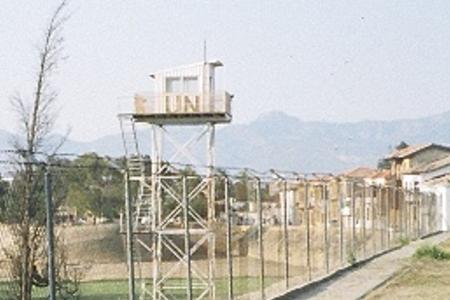