The prolonged ‘refugee crisis’ has been a subject of debate and research in many respects in Europe. In series of concrete effort and initiatives, throughout the crisis, the main challenge has been how to find a right balance for an effective and liable policy response in compliance with core EU values and obligations. Civil society have repeatedly criticised Europe’s policies of externalisation of border controls which led to massive violations of the human rights of asylum seekers and migrants. The EU has been widely criticized for implementing one-sided and EU-centred policies in contrast to the rhetoric. On 25 August 2015, François Crépeau, the UN Special Rapporteur on the human rights of migrants, stressed, “Let’s not pretend that what the EU and its member states are doing is working”.

Mostly due to the political sensitivity of the issue, the European leaders have generally met on the lowest common ground, that is largely to rely on ad hoc responses. This has therefore let taking steps within a security-driven and control-oriented approach. The EU’s response in this direction together with every ship full of hundreds of asylum seekers or irregular migrants that sinks in the Mediterranean Sea has incrementally put the EU’s credibility as a global actor in a tight spot.

To overcome the challenges, the EU’s migration policy response included a focus on externalization of controls and stopping the refugee flow from third countries. Alerted with the increasing number of flows and shifts in route especially in 2015, the 28 EU heads of state turned their attention to a dialogue with Turkey for further cooperation. Accordingly, a Joint Action Plan, agreed on 15th October 2015, was first declared as an output of the mutual demand for migration management strategy. Originally agreed upon in 2015, on 18 March 2016, the EU and Turkey agreed on a deal and its implementation. At its core, the deal aims to address the overwhelming flow of refugees crossing the Mediterranean.

Many studies have discussed and criticized the deal based on its primary focus on keeping refugees out of European borders without addressing the structural causes as well as being contrary to Europe’s human-rights commitments. The critics reflect the current situation as they have long emphasized an urgent need to close the gap between the rhetoric and the practice. However, it is also necessary to look the deal at a broader perspective. The concerns and challenges raised from the EU-Turkey refugee deal is not limited to its scope and implementation, but also EU’s role and place in international affairs. In other words, the way migration issues stemming from the prolonged ‘refugee crisis’ are handled at the EU-level is a critical component affecting the EU’s reputation and effectiveness as a global actor.

Migration, for a while, has been at the heart of the political debate and strategic priorities in EU policy-making in various ways. It is therefore one of the strategic priorities of its external relations, as the EU has emphasized in its documents. Over the last couple of years, due to the ‘refugee crisis’, migration has played a central role in the formulation of a holistic approach to foreign policy. While uncontrolled migration blurs the distinction between the internal and external dimensions of migration policies, this shifts attention to the sources of the migration itself.

In addressing the historical challenge raised by the refugee flow, the EU decided to broaden its cooperation with origin and transit countries by renewing its global approach to migration and then presenting a European Agenda on Migration. Although the rhetoric is about the promotion of ‘mutually beneficial’ partnerships with third countries in a balanced manner, third countries see the efforts of the EU as a part of a one-sided, burden shifting policy.

In general term, the EU has mostly been illustrated “a power of another kind” as an expression of its normative power. The positive projection of European values has been the most occurrent indicator of its transformative power in its immediate neighborhood. In that sense, policies and actions related to the external dimension of migration should not be underestimated with regards to the characteristics of the EU’s global actorness and its sustainability. In order to meet the expectations of a Union that is more engaged in the challenges surrounding the neighboring and partner countries and the international community, as well as to underpin the claim of normative power in foreign policy, an effective external migration policy could only offer necessary momentum to the EU. This is why ongoing migration pressure on the EU member countries is not a challenge that can only be solved by the EU securing its external borders with a control-oriented approach. The issue of international migration has been transformed into a problem that will question the EU integration in many ways. EU’s global actorness which evokes its normative role has no exception.

The EU's refugee deal with Turkey has been in force for more than three years. Nevertheless, the implementation of the agreement is still a challenge. First, the respect of human rights was supposed to be a crosscutting priority for the external migration policy frame. But the critics on the deal, from the very beginning, has pointed out the violated principles of international law, which guarantee individual review of asylum applications. Whether it provides real access to protection is under question.

Second, a convergence of perceptions and expectations is important, mainly because the current narrative raises the question of whether the EU’s externalization of migration policies is more likely to mean “burden shifting” onto third countries, or, as claimed in EU discourse, “burden sharing”. Many researches indicate that the Turkey-EU migration relations are deeply filled with mistrust and this is likely to remain in the foreseeable future.

Moreover, the EU-Turkey deal has been in place at a time that Turkey goes through a critical domestic situation raising concerns in terms of human rights standards and functioning liberal democracy. On one hand, the EU puts stress on the fact that there has been serious backsliding in the areas of freedoms  and human rights in Turkey. On the other hand, the deal also makes the EU seem to ignore many concrete critics over democratic standards and human rights in Turkey at the expense of keeping refugees out. EU’s consistent ignorance over backsliding in Turkish democracy in recent years has unexpectedly exacerbated the refugee crisis in Europe: the increasing number of Turkish asylum seekers for the first time. Therefore, many has highlighted an existence of a political bargaining over refugees in the EU-Turkey refugee deal.

Overall and in most of its substance, the EU-Turkey deal smacks of a security-oriented and interest-based structure and illustrates the rise of pragmatism. There have been several studies about the EU’s rationale in the Euro-Med partnership that seems too narrow and confines itself to the securitization of migration. The recent EU-Turkey refugee deal had already been nominated to be evaluated in such rationale. It seems to be a vital example so as to address the effects of both its challenges and outcomes on the EU’s global actorness.

Frans Timmermans, the European Commission’s first vice-president, early in spring 2019, said “Europe is no longer experiencing the migration crisis we lived in 2015”. But, even so, beyond the structural problems in the EU and its crisis management, there is a lot to think deeply about its effects on the EU’s global actorness in terms of the normative rhetoric on which rests the foundations of the EU and its foreign policy credibility. 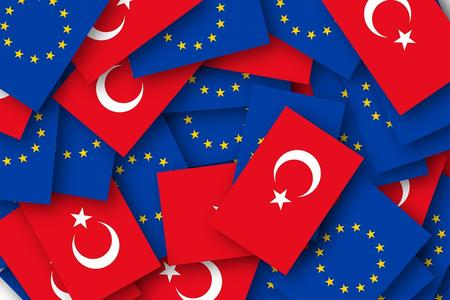