A Vision for Building a Prosperous and Responsible Global Nation 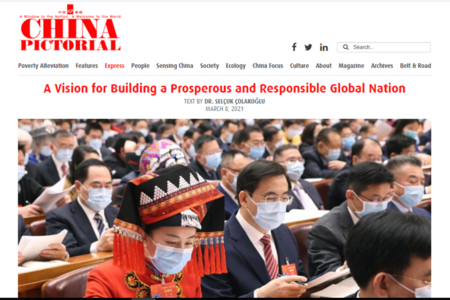 Chinese Premier Li Keqiang delivered the Government Work Report on March 5, 2021, at the Fourth Session of the 13th National People’s Congress (NPC), the top legislature of China. A 35-page English version of the report presented evaluations of China’s work in the 13th Five-Year Plan  period (2016-2020) and outlined goals for future work and perspectives on the 14th Five-Year Plan  period (2021-2025).

The Chinese government set specific targets for the economy in 2021 including 6 percent or more GDP growth, creation of 11 million new jobs, maintaining CPI at around 3 percent, cutting the ratio of deficit to GDP to around 3.2 percent, cutting energy consumption per unit of GDP by around 3 percent, steadily increasing both volume and quality of imports and exports, achieving a basic equilibrium in the balance of payments, steady growth in personal income numbers, better work on the environment, continued reduction in discharge of major pollutants, and grain output of over 650 million metric tons.

The growth goal of above 6 percent for 2021 is quite realistic considering the International Monetary Fund (IMF) projects China’s economy will grow by 8.1 percent this year. This includes quick and stable recovery in consumption, investment, and exports. The central government of China will continue to provide economic support for more vulnerable economic entities, especially small and medium-sized companies.

China’s success in poverty alleviation has been recognized by the international community. Chinese President Xi Jinping recently declared the country’s “complete victory” over absolute poverty. Over the past eight years, nearly 100 million people were lifted from poverty in China. Since the launch of the reform and opening up in the late 1970s, 770 million once-impoverished people across the country have shaken off poverty according to China’s current poverty line. China has contributed more than 70 percent of global poverty reduction. The daunting task the Chinese government set to eliminate absolute poverty has been successfully accomplished.

In terms of environmental protection, the Chinese government aims to promote green development and ensure that China meets the targets for its nationally determined contributions in response to climate change by 2030. China will expedite the transition of its growth model to green development and promote both high-quality economic growth and high-standard environmental protection. Energy consumption per unit of GDP and carbon dioxide emissions per unit of GDP will be reduced by 13.5 percent and 18 percent, respectively.

A step connected to high-quality development is China’s aim to improve strategic scientific and technological strength. The country will ensure the success of projects launched to achieve breakthroughs in core technologies in key fields and further plan and implement the Sci-Tech Innovation 2030 Agenda. The Chinese government has encouraged opening up and international cooperation in the science and technology sector and demonstrated commitment to protecting intellectual property. The central government’s expenditures on basic research will increase by 10.6 percent.

Belt and Road Initiative: For Regional Integration across Asia, Europe and Africa

According to the 2021 report, the Chinese government will promote the high-quality development of the Belt and Road Initiative (BRI). China’s BRI, which was first put forward by Chinese President Xi Jinping in 2013, has resonated across the ancient Silk Road as well as the wider globe. Both in terms of its financing and geographical coverage, the initiative has increasingly become the object of intense discussion.

The BRI has been reaching a wider geographical area. The initiative encompasses two major geographical expanses: The first follows the historical overland Silk Road through Central Asia, north to Russia, and eventually to Europe, while the other passes through Iran and Turkey to the south. The terrestrial route is called the Silk Road Economic Belt. The BRI also includes the 21st-Century Maritime Silk Road (MSR) which covers Southeast Asia, South Asia, East Africa, and Europe. The MSR route begins in China’s southeast coast, passes through the Strait of Malacca and crosses the Indian Ocean to the Red Sea before reaching further into the Mediterranean.

The BRI has been facilitating installment of a wide-range cooperative efforts from infrastructure to developmental aid. Successful implementation of the BRI has not only helped the development of China and partner countries, but also contributed to an economic boom reverberating across Asia to Africa and Europe.

China as a Responsible Global Player

China is a particularly important global player, and members of many leading international organizations and forums like the United Nations (UN) and its related organizations, the G20, the World Trade Organization (WTO), the Asia-Pacific Economic Cooperation (APEC), the Shanghai Cooperation Organization (SCO), and BRICS have praised China’s global role in recent years.

The Chinese government has expressed intentions to deepen bilateral, multilateral, and regional economic cooperation and uphold the multilateral trading regime. China will work for early implementation of the Regional Comprehensive Economic Partnership (RCEP) agreement and signing of the China-EU Comprehensive Agreement on Investment. It will accelerate free trade negotiations with Japan and South Korea. China will actively consider joining the Comprehensive and Progressive Agreement for Trans-Pacific Partnership (TPP). It will also promote the growth of mutually beneficial China-U.S. business relations based on equality and mutual respect.

During the COVID-19 pandemic, China has been cooperating with other countries in developing vaccines and promoting distribution of vaccines around the world. It has upheld a responsible stance considering the grave concerns expressed in Global South countries related to timely access and delivery of vaccines. The pandemic has demonstrated that humanity is one family and that China is a responsible member. China has always underlined the importance of multilateralism, global openness and inclusiveness, and mutually beneficial cooperation in times of such a global health crisis. To this end, strengthening the UN-centered international system is of key importance for overcoming the pandemic and global financial difficulties. The world needs greater collaboration on a global scale to overcome the destruction of the pandemic, so international organizations and forums like the UN, the World Health Organization (WHO) and the G20 must be central players. China stands ready to engage in any kind of cooperation at multilateral and bilateral levels in developing solutions for the pandemic and other global issues.

The 2021 Government Work Report presents a brighter picture not only for China but also the global economy, despite some challenges. The report presents sound and reasonable solutions for current economic problems like poverty, environmental issues, and unemployment. As the world’s second-largest economy, China’s GDP growth set at above 6 percent will exert a positive effect on the global economy in 2021. In the report, the Chinese government offered methods for the world to tackle problems stemming from the pandemic. China has also provided solutions to ensure a booming global economy in the post-pandemic era, which is exactly what we need.

The author is director of the Turkish Center for Asia Pacific Studies in Ankara.