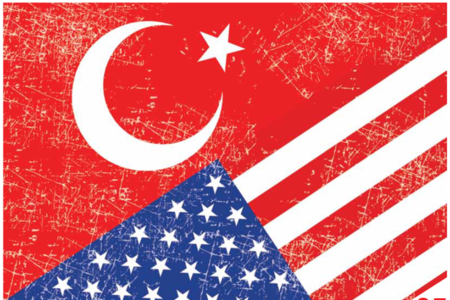 The Turkish-American Relations during the Trump Administration: Cooperation or Collision?

Turkey-United States relations are experiencing one of its hardest times. There are issues inherited from the Obama administration that cause tension between the parties. The Trump administration is not in best accord with Ankara either. The tensions with the Trump administration may not be limited to recent visa crisis and Jerusalem declaration. Yet, the analysis of bilateral relations is at a breaking point is an exaggerated one. There are no easy solutions for the current problems and fast reconciliation does not seem plausible in the short run. Yet, at the same time the resolve among the parties to maintain the relations rather than cutting ties is also seen during the crises. Particularly, President Donald Trump and President Recep Tayyip Erdoğan avoided an escalation that gets out of control. Thus, despite the complications, Turkey- United States alliance seems to be resilient.

Issues Inherited from the Obama Administration

The most referred problems in Turkey-United States relations are inherited from the Obama administration. These are the YPG (the armed wing of the pro-Kurdish the Democratic Union Party or PYD in Syria) legitimacy and its role in anti-ISIS (the Islamic State of Iraq and the Levant) coalition and judicial processes in the United States and Turkey related to the July 15th coup attempt. Turkey and the United States have two contradicting readings of these two issues. On the YPG issue, Turkey regards the YPG as an offshoot of the PKK and this is admitted several times by U.S. officials as well. Ankara regards its role in the fight against ISIS and legitimization by Washington as a direct threat to its national security. Ankara also questions its ally’s intentions since the training and weapons provided by the U.S. has the risk to be used against Turkey. On the other hand, the United States does not focus on the legitimacy problems of pitting one terrorist organization against another. Rather Washington saw merits of reduced casualty risk in using the YPG supported the Syrian Democratic Forces (SDF) against ISIS rather than U.S. troops. After the fight against ISIS, the United States may decrease the visibility of its cooperation with the YPG and this may reduce the tension. But in problem will remain there in essence and the issue will continue to be a matter of tension.

The second issue that two countries are not at the same page is the July 15th coup attempt related judicial processes in Turkey and the United States. The Erdoğan administration regards the Atilla Case (formerly Zarrab Case) as an extension of Gulenist plot against the ruling party, expects the U.S. to extradite Fethullah Gülen who reside in the United States. Ankara also expects from Washington to at least show respect for the judicial processes about the putsch plotters if not cooperate that includes the prosecutions of consulate staff Metin Topuz and an American pastor Andrew C. Brunson. From the United States point of view, the evidences are not strong enough to extradite a legal permanent resident and rather than prosecution due to their relations with the coup attempt Topuz and Brunson are harassed because of being Consulate staff or U.S. citizen. It seems that the prospects for a reconciliation on these inherited issues is limited since the un-cooperation is based on differentiation in substance and parties do not want to be seen as the one compromised.

Turkey- United States relations had major ups and downs during the Obama administration. Especially in the last years the relationship hit a low point where the two country heads got into a verbal duel with their declarations to media. Along with the new administration two sides had higher hopes for a better bilateral relationship. During the campaign and after the election Trump himself and his team made positive declarations on both Turkey and President Erdoğan in particular. The Erdoğan administration’s Obama fatigue and expectations of Clinton administration to be a similar one made Trump administration a preferable one from the day one.

Nonetheless, the Trump administration maintained the United States position on the inherited disputed matters outlined above. Trump approved shipment of new weapons to the YPG, then the Zarrab Case advanced by mentioning the name of a former Turkish minister during his term. Thus, the expectations of Trump and Erdogan, as two former businessmen, cutting a deal on the disputed matters did not realize. Furthermore, the White House endorsed Ambassador John R. Bass during the visa crisis and Trump, recently declared Jerusalem as the capital of Israel caused a disappointment in the Erdoğan administration.

These may not be the last ones. The Trump administration has a certain way of look at Islam and this perspective is at odds with Erdoğan. The ruling AK Party government had pursued an active diplomacy in shifting use of “Islamic terrorism” into “radical extremism” in line with CVE practices. Moreover, in the recent years, Islamophobia is among the top issues the AK Party government active in fighting and creating awareness against. Yet, subscribed to a right-wing populist approach Trump probably will continue to insist on his terminology and symbolic moves. In addition, Trump may also designate the Muslim Brotherhood (MB) as a terrorist organization. The use of term and insistence on such terminology will create distaste; yet, designation of MB as a terrorist organization may cause a tension similar to the Jerusalem declaration since the AK Party government is a staunch supporter of the group.

The current tensions between Turkey and the United States are important disturbance to the bilateral relations and will prevent close cooperation between Ankara and Washington. Yet, neither the current tension nor the potential future ones will likely to cut ties among them. The claims in such direction disregard the long term investments of the two countries in bilateral relations in primarily military but also political terms. Besides, the two country administrations signal resilience in alliance. Both Ankara and Washington are quite careful in not bringing the bilateral relations to brink of breaking point. For instance, notwithstanding the given importance on the matter, Turkish Foreign Minister Mevlüt Çavusoğlu asserted that ‘Turkey will not fall out with the United States over PYD.” Furthermore, during the visa crisis the U.S. Secretary of Defense James N. Mattis declared that despite the crisis the United States will continue its military cooperation with Turkey. Lastly, the AK Party government directed their criticism towards the American establishment and the Obama administration’s leftovers about the disputed matters mentioned above rather than President Trump himself. Unless a major change in balances the two countries tend to preserve the alliance.