The importance of middle powers in the realm of global governance has soared post-2008, in the aftermath of the global financial crisis. G20 summits, which began convening following the global financial crisis of 2008, have been increasingly overwhelmed since 2010, by those member countries left outside the scope of the G7 (Canada, France, Germany, Italy, Japan, the United Kingdom and the United States) and BRICS (Brazil, Russia, India, China and South Africa). Within this context, five of the G20’s middle powers declared their participation in a new formation termed MIKTA (Mexico, Indonesia, South Korea, Turkey, and Australia), in September of 2013 at the 68th meeting of the UN General Assembly. Largely considered to be an informal and low-profile forum, MIKTA primarily aims to serve and protect the interests of its five members on the global scale.

For the first time, MIKTA countries have begun to take part in global governance in a systematic and effective manner, working eagerly to make room for themselves as middle powers. While the G20 offers each MIKTA country a unique opportunity, their individual efforts are nevertheless overshadowed by the G7 and BRICS. Being second-tier countries, they found themselves unable to exert sufficient influence within the G20. Therefore, it is possible to suggest that the establishment of MIKTA has boosted the effectiveness and prestige of its five members within the G20. Another major benefit of MIKTA for its members is its facilitation of joint efforts by five countries, each of which comes from a distinct socio-economic background and geographical region, and all of which are focused on setting and implementing a common agenda for middle powers and the international community at large.

Before MIKTA was founded, all five of its member countries used to identify policy goals in accordance with their own priorities or those of their allies and partners. Their experience in carving out a global vision on their own was extremely limited. Thanks to MIKTA, these five middle powers were included in the decision-making process concerning global financial management for the first time within the G20, and have gained a chance to reinforce their efforts with a more active participation in global governance.

Some critics have come forward questioning MIKTA’s institutional development and its capacity-building process. The past year has been a very turbulent time for all MIKTA member countries, which have been struck with issues pertaining to domestic politics or financial troubles, and have had little energy and time to focus on global governance issues.

For example, since the Coalition, also known as the Liberal–National Coalition in Australia, under Prime Minister Malcolm Turnbull, won the Australian federal election on 2nd July, 2016. Australia has paid less attention to MIKTA. As Australia was the chair of the group in 2016, the federal election has negatively affected MIKTA’s agenda setting process.

Another member country, Turkey, has also experienced great changes over the past year, with the appointment of a new prime minister in May 2016, the attempt of a coup, the declaration of a state of emergency in July 2016, and finally, a constitutional referendum on April 16th, 2017. Turkey, the MIKTA chair in 2017, will have to concentrate on its internal agenda, more than on global governance issues like the G20 and MIKTA. One could say that MIKTA has had two consecutive years lost under the chairmanships of Australia and Turkey due to developments in their domestic politics.

Furthermore, South Korea has experienced troublesome developments in domestic politics of its own.  After the eruption of an anti-government protest demanding that President Park Geun-hye steps down, she was impeached and finally removed from office on March 10th, 2017. Moon Jae-in, the Democratic Party's candidate, was elected as the South Korean president on May 9th, 2017, but the newly-formed Korean government will need time to address foreign policy as well as global governance issues including the G20 and MIKTA.

Moreover, there were regional elections in Indonesia in early 2017. The international public particularly paid attention to the candidacy of Basuki Cahaya Purnama (Ahok), the first governor with Chinese ancestry and the second Christian governor of Jakarta, who went on to lose the election. Ahok was later convicted of blasphemy against Islam and sentenced to two years imprisonment. Some experts claim that Ahok’s conviction of blasphemy is a challenge against multiculturalism and democracy in Indonesia.

The last member of MIKTA, Mexico has been focused on its souring relations with its northern neighbour under the Trump administration. President Trump’s anti-Mexico campaigns and policies such as the suggestion of building a wall along the border, the extradition of irregular Mexican migrants working in the United States, and his anti-NAFTA stance have raised concerns for Mexico, and the 'Mexican wave' has begun to lose its momentum globally. In addition, Mexico has been focused on state elections in June 2017 and begun campaigns for presidential and general elections, which will be held next year.

It should be also noted that 2016 was not a particularly good year for many emerging powers like Brazil, China, and South Africa, which were shaken by different crises ranging from corruption scandals to the stock-market crash. The anti-globalisation movement has been sped up by the election of Donald Trump as President of the United States. President Trump’s decision to withdraw the United States from the Paris Climate Agreement, has put global governance at risk.

Despite its many efforts, the G20 has had a poor record in increasing the rate of global economic growth. The G20 growth target to boost collective output by 2% has not been fulfilled by the leaders’ summit in recent years. The inability to find clear solutions to persistently low growth overshadowed other aspects of the G20 agenda.

The current German presidency is being forced to deal with the polarization of politics among G20 members, particularly US positions on climate change and trade. In addition, MIKTA foreign ministers did not hold a meeting during the G20 Hamburg Summit, July 7th and 8th, 2017. The 9th and last MIKTA Foreign Ministers Meeting was carried out in Bonn in February of this year.

Finally, the degree to which MIKTA member countries will be successful in establishing a shared vision and strategic position based on their common interests in global governance will determine the future of this grouping. After missing two consecutive years (2016 and 2017), the next two years (2018 and 2019) will be a critical period for MIKTA, determining whether it will remain a successful middle power grouping on global governance.


Dr Selcuk Colakoglu is a professor of International Relations and Director of The Turkish Center for Asia-Pacific Studies in Ankara, Turkey. 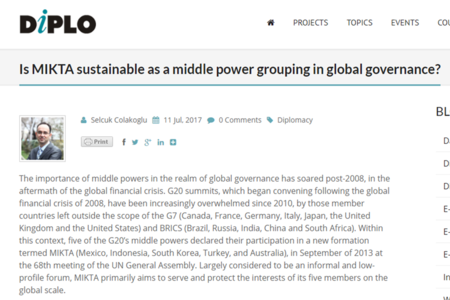 Is MIKTA sustainable as a middle power grouping in global governance?