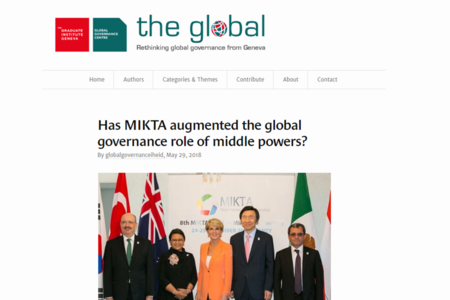 Has MIKTA augmented the global governance role of middle powers?

Five of the G20’s middle powers declared their participation in a new informal partnership termed MIKTA (Mexico, Indonesia, South Korea, Turkey, and Australia) in September of 2013 at the 68th meeting of the United Nations (UN) General Assembly. MIKTA primarily aims to serve and protect the interests of its five members on the global scale. This article assesses the global governance role by MIKTA in last 5 years since its establishment.

Before MIKTA was founded, its five founding member countries generally identified their policy goals in accordance with their own priorities or with those of their allies and partners. Their experience in carving out a broader global vision on their own was extremely limited.

While the G20 offers each MIKTA country a unique opportunity to shape global policy processes, their individual efforts were often overshadowed by the G7 (Canada, France, Germany, Italy, Japan, the United Kingdom, and the United States) and BRICS (Brazil, Russia, India, China and South Africa) groupings within the G20. Being “second-tier” countries, they found themselves unable to exert sufficient influence within the G20.

Through MIKTA, the interests of the five middle powers have been better incorporated in the decision-making processes concerning global financial management within the G20. MIKTA countries have begun to take part in global governance in a systematic and active manner, working eagerly to take up their place in global processes as middle powers.  Therefore, it can be argued that the establishment of MIKTA has boosted the activism of its five members within the G20. For example, its members have become more active in promoting the seven priority themes of the grouping at the recent G20 meeting in Bonn, referred to below.

MIKTA is working hard to generate a shared “club culture” through the gradual maximization of commonalities and minimization of differences among its member countries. Preserving its internal coherence and prioritizing issues by assessing which national interests of individual members already converge are two of MIKTA’s main priorities.

MIKTA’s broad agenda has crystalized gradually during regular Foreign Ministers Meetings (FMM) among its member states. For example, among the agenda items identified for cooperation in November 2014 were infrastructure promotion, health governance, disaster risk management, and humanitarian assistance. MIKTA foreign ministers decided to place prominent focus on health governance due to the widespread epidemic of the Ebola virus at that time. As for disaster risk management and humanitarian assistance, MIKTA countries aimed to leverage their experiences to intervene more efficiently in disasters that take place both within their own national borders and beyond.

The last three out of four MIKTA FMMs were held under Turkey’s 2017 Chair. The ninth MIKTA FMM was held on February 16, 2017 at the margins of the G20 Foreign Ministers Meeting in Bonn. The Bonn meeting focused on seven priority themes: counter-terrorism and security; trade and economic cooperation; energy; sustainable development; gender equality; peacekeeping; good governance and democracy. The MIKTA ministers also discussed regional and global issues and Turkey’s priorities as the Chair, namely: counter-terrorism; economic cooperation, and refugee and migration issues.

The 10th MIKTA FMM was held in New York on September 22, 2017 on the sidelines of the 72nd session of the UN General Assembly. The New York meeting jointly urged North Korea to thoroughly implement the relevant UN resolutions and take the path toward denuclearization and peace as suggested by the international community. It followed joint statements by MIKTA Foreign Ministers in 2014, 2015, 2016, and 2017 condemning North Korea’s nuclear and missile tests. With respect to the recent violence and refugee crisis in the Rakhine State in Myanmar, the FMM voiced deep concern over the humanitarian crisis of the Rohingha Muslims and called for an immediate stop to violent actions, the protection of civilians and humanitarian assistance. As to the current situation in Venezuela, the foreign ministers of the MIKTA voiced hope that it will be resolved in a peaceful manner through dialogue among parties concerned.

The 11th MIKTA FMM was held on December 13, 2017 in Istanbul without participation by any foreign minister of member countries due to the extraordinary leaders’ summit of the Organization of Islamic Conference on the US embassy move from Tel Aviv to Jerusalem, hosted by Turkey at the same day of the pre-scheduled MIKTA FMM. The agenda of the meeting covered recent developments in the Middle East, Australia’s 2017 Foreign Policy White Paper, North Korea, migration and asylum seekers, the latest developments in Venezuela, and the fight against terrorism.

The last and 12th MIKTA FMM was held in Buenos Aires on May 21, 2018 on the sidelines of the G20 Foreign Ministers’ meeting under Indonesia’s MIKTA Chair. Indonesia has underlined the agenda with regard to counterterrorism and global security, commerce and the creative economy, as well as in enhancing MIKTA’s peacekeeping capacity. The MIKTA Foreign Ministers also exchanged their views on several regional and global issues, including the situation the Korean Peninsula and in the Middle East, especially Palestine and Syria, the conflict in Rakhine State and post-election Venezuela, as well as the global economy.

Since the establishment of MIKTA, a large spectrum of global issues and international and regional security matters have been placed on its agenda. More generally, it suggests the continuing demand within existing global governance arrangements for informal platforms for dialogue and policy coordination, especially among middle-powers.

But it is difficult to say with certainty the extent to which MIKTA has contributed to addressing any given global issue in recent years. The time is ripe for MIKTA to set action-orientated objectives moving forward. MIKTA countries also believe that they will be able to act as a unified mediator in global and regional disputes if they build the capability to act independently from great powers in the G7 and the BRICS countries.

Within this framework, three possible modes of action for MIKTA would be: creative regionalism, problem solver, and bridge builder. In those cases, MIKTA needs to set certain targets not necessarily associated with the broad topics of global governance that are already addressed to a large extent in other global forums. All in all, despite some positive contribution of its members’ supporting global governance objectives, MIKTA needs more time to develop as an influential and more effective model of global governance for middle powers.

By: Selcuk Colakoglu
Professor of International Relations and Director of The Turkish Center for Asia-Pacific Studies, Ankara, Turkey
scolakoglu@gmail.com