It is apparent that Turkey-South Korea relations are deepening in 2000s. In spite of all statements of friendship in the past periods, political, economic and cultural relations have not had reached a satisfying level.  Especially within the last decade, there is a strong will on both parts to develop bilateral relations. Mutual high rank visits have reached an unprecedented intensity.  There is even an on-going discussion on the road map to be followed in order to establish a strategic partnership. In this respect, Turkish-Korean forums are being arranged by and between the Center for Strategic Research (SAM) of the Ministry of Foreign Affairs of Turkey and Korean Ministry of Foreign Affairs and Trade. The first of these forums was held in Seoul on December12th, 2011, and the second, on 30th November of 2012 in Ankara. In these forums in which academicians, diplomats and businessmen participated, debates on the means of further developing political, economic and cultural relations are being held.

Ankara has developed friendly relations with Seoul beginning from 1948, the date of the proclamation of independence of the Republic of Korea.  Turkey’s deployment of soldiers under UN command for the defense of South Korea during the Korean War has added with a deeply emotional aspect to the bilateral relations. On the other hand, despite all friendship statements, a common political vision covering both mutual relations and international cooperation has not been yet developed. Ankara and Seoul have been trying to extend the political cooperation to a level of strategic partnership since early 2000s. However, in order to mention a strategic alliance, it is required that Ankara and Seoul develop a common political attitude against regional and global issues and defend this position in international platforms such as the UN and G20.

The most dynamic dimension of the Turkish-Korean relationship is the intensifying economic cooperation. As for economic relations, it seems that Korea, with a more competitive structure, has a decisive position in comparison to Turkey. Korea’s prevailing position in economic relations is apparent in commercial statistics. By 2011, 6.3 billion dollars of the total trade volume of 6.8 billion dollars consisted of Korean exports to Turkey. Hence, one of the urgent issues concerning bilateral relations is this trade deficit. Current commercial relations are not sustainable for Turkey. Furthermore, if this trade deficit continues to exist, this will entail reluctance on part of Turkey in respect to developing mutual relations. Seoul, being aware of this fact, offers investments by Korean companies in Turkey and other compensating policies such as providing that the outsourcing Korean companies meet the technological requirements of Turkish companies. Moreover, South Korea is a strong candidate, along with China, Japan and Canada, for the second nuclear power plant planned to be constructed in Sinop City. Ankara also appears to be willing to cooperate with Korea, with which it has sound political relations, on defense industry, nuclear energy and alternative energy resources. Furthermore, Korean firms have not been interested in tenders regarding the natural gas and oil exploration endeavors of Southern Cyprus in the eastern Mediterranean. There are important opportunities for both South Korea and Turkey, which are two of the twenty most-developed economies in the world.

Researches having been conducted for long years reflect that both Turkish and Korean people have a very positive attitude toward each other. Shared sympathy between the two nations has become the strongest motive behind enhancing relations. However, in order to render the Turkish-Korean relations indispensable, the level of the relations between the two nations is not satisfying. In this era of public diplomacy, the best way to render the bilateral relations indispensable is to establish sound connections between the nations. While Turkish and Russian people had been in serious doubt against each other throughout history, increasing opportunities for interaction between both communities have led to a most effectively dynamic kind of bilateral relations over the past two decades.  Currently, strong social and economic ties require both sides to act more constructively in possible political disputes. In spite of the increase in interactions between Korean and Turkish people in 2000s, relevant efforts paid by both parties are still insufficient. For instance, while 30 million international travelers have visited Turkey in 2011, only 170 thousand of this number consisted of Korean tourists.  Whereas, the total number of Korean travelers going abroad was about 12 million in 2011. Ankara has been considering tourism as a balancing element in relations with Seoul. However, tourism, being an economic sector, also bears a significant mission in respect to public diplomacy. Thus, interactions between two communities must be mutually satisfying. While the rising middle class in Turkey has preferred foreign holidays over domestic tourism in the course of recent years much more than it used to do previously, the number of Turkish tourists visiting Korea in 2011 has remained at 17 thousand. Student exchange programs are also on the table with regard to increasing the grounds for contacts between the two communities.

Consequently, it appears that Turkish-Korean relations enjoy a stable development. Both parties try to picture a road map in order to convey the relations to a dimension of strategic alliance. 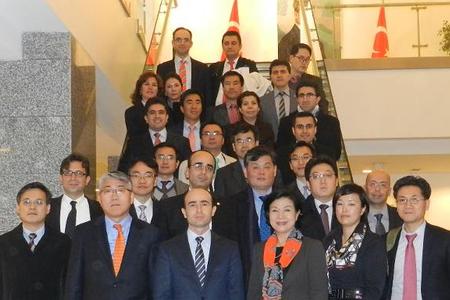