Turkey-Singapore relations have a deep history dating back to the 19thcentury. The Ottoman Empire opened its first representation to British-ruled Singapore in 1864. This office was transformed to a Consulate General in 1901. Even the first consul general, Ahmet Ataullah Efendi, died in office in 1903 and was interred in Singapore. Singapore won its independence in 1965, Turkey established diplomatic relationship in 1969, and the Turkish embassy to Singapore began operating in 1985. As for Singapore, it opened an embassy in Ankara in 2012. Singapore does not establish embassies in every country, and its opening an embassy in Ankara—even if late—is a symbolic indication of the importance it gives to Turkey.

Singapore under the British administration, as a part of the Federation of Malaysia, and even after independence, has been an important trade and logistics center in Southeast Asia. In this respect, Turkey has worked to establish continuous and regular relations with Singapore since the 19thcentury. Trade relations between the two countries have developed even more over the last 30 years. The start of bilateral high-level visits since the 1980s are already a sign of this development. There have been two visits at the presidential level from Turkey to Singapore and five at the prime ministerial level. On the other hand, there has been one visit both at presidential and prime ministerial level from Singapore to Turkey. The last three decades have also seen many visits at the ministerial level. The latest visit from Turkey to Singapore was that of Prime Minister Recep Tayyip Erdoğan on January 9th, 2014. During this visit, Prime Minister Erdoğan had a discussion with President Tony Tan Keng Yam and Prime Minister Lee Hsien Loong. The main agenda items of the top-level talks were the development of bilateral economic and political cooperation, free trade agreement (FTA) negotiations, and cooperation in combating international terrorism.

For Turkey, Singapore comes after Indonesia, Malaysia, Thailand, and Vietnam in terms of ASEAN trade partners. According to data from the Turkish Ministry of Economy, the volume of trade between Turkey and Singapore was $111 million in 1990, $281 million in 2000, and $666 million in 2012. The highest trade figure between the two countries was $1.194 billion in 2011. Singapore is one of few East Asian countries with which Turkey has a bilateral trade surplus. As for mutual foreign direct investment between the two countries, it is very limited. In truth, Singapore has given importance to developing commercial and economic relations with Turkey in recent years. Singapore has also begun operating an office of the Ministry of Commerce’s International Enterprise Singapore which aims to increase foreign trade with foreign countries.

For years there have been mutual direct flights between Istanbul and Singapore by Turkish Airlines and Singapore Airlines. During the visit, a new civil aviation agreement was signed to increase the number of direct flights and thus boost the number of visitors from both sides—currently at nearly 30,000 Singaporean visitors to Turkey and 20,000 Turkish visitors to Singapore. In addition, both Singapore Airlines and Turkish Airlines, which are the member of the Star Alliance network of airlines, are among the world’s airlines with the most transit passengers. In this respect, cooperation between these two countries in the field of aviation is expected to contribute even more to their airline.

Turkey and Singapore share similar opinions on issues such as interfaith harmony, dialogue among civilizations, and resolving international issues through peaceful means. Singapore presents a successful model to the world of multicultural society home to Buddhists, Muslims, Hindus, and others living together in peace. In this respect, Prime Minister Erdoğan, during a meeting with Prime Minister Lee, requested that Singapore take some initiatives to stave off the growing Buddhist-Muslim conflict of recent years in Myanmar. Moreover, the Turkish and Singaporean sides mutually exchanged opinions on Southeast Asian and the Middle Eastern issues. A memorandum of understanding between the two countries on the fight against terrorism was also signed. After Ankara signed a treaty of amity and cooperation with ASEAN in 2010, becoming a member of the ASEAN Regional Forum has become Turkey’s biggest regional goal. Turkey wants to get Singapore’s support on this issue.

Looking at the history of relations between Turkey and Singapore, it’s easy to say that bilateral relations will continue to develop in a stable and steady manner going forward from 2014. 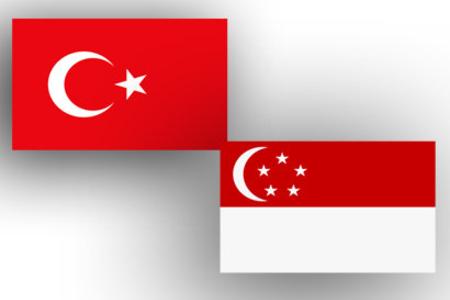