The 9th BRICS summit which took place from 3-5 September, in Xiamen, has once again stimulated a debate about whether the grouping has become a new dominant actor for global governance. Alongside the G7 (Britain, Canada, France, Germany, Italy, Japan, and the United States), which represents the most developed economies in the world, BRIC, consisting of Brazil, Russia, India, and China, is today able to have its name frequently mentioned as an alternative gathering of newly emerging and large-scale developing economies. BRIC transformed into BRICS with the admission of South Africa into the grouping in 2010, although the capacity of South Africa’s economy falls far behind those of the others. Even in quantitative terms, it is clear that BRICS countries matter. Together, they cover 44% of the world’s population and 25% of the global economy, with huge growth potential.

Increasing economic capacity of BRICS as a global player

BRICS countries have proved themselves a potent voice for developing countries with their successful developmental models. One of the big achievements of BRICS was to create an independent financial capacity to subsidise their sustainable development.

The BRICS Contingent Reserve Arrangements (CRA), with a USD$100 billion fund, became operational in 2015. The BRICS’ New Development Bank (NDB) has already been launched with an initial capital of USD$100 billion. At the Xiamen summit, Chinese President Xi Jinping, promised USD$4 billion as aid to the NDB’s business operation facility. Besides, there is a BRICS currency reserve fund with USD$100 billion. These financial institutions are necessary for the sustained growth of BRICS, and for developing its own approach to economic growth and development.

China, in particular, has certain advantages and experience to promote sustainable and inclusive growth in different manners. Together, the foundation of the Asian Infrastructure Investment Bank (AIIB) and the NDB, provided new financial instruments for China to properly apply its international economic agenda. Besides, China is trying to make its yuan the reserve currency of BRICS. However, this attempt is considered a hegemonic tendency by other BRICS members.

Differences of BRICS in international politics

It could be said that a dual structure exists within the BRICS itself. On one side, is the Sino-Russian strategic alliance developed since the early 1990s. On the other, are the democratic trio of India, Brazil, and South Africa. This latter subgroup, which came to the fore with the creation of IBSA in 2003, also agreed to inclusion in the BRICS.

Moreover, BRICS has two opposing political blocs in Asia. Russia and China are aligned with Pakistan and Iran on one side, and India is aligned with the Unites States and Japan on the other. Russia has a rapprochement policy with Pakistan, in repose to its Cold War ally– India’s – engagement with the United States. Border disputes between India and China constitute the biggest political challenge to BRICS. The military stand-off between India and China at Doklam in Bhutan, was settled just days prior to the Xiamen summit.

BRICS countries are also split regarding the United Nations Security Council (UNSC) reform. While Brazil, India, and South Africa support UNSC reform, China and Russia are opposing it for different reasons. Russia is reluctant to see the UNSC diluted. China is against the reform, because the G4 alliance (Brazil, Germany, India, and Japan) would probably become a member if the UNSC reform were to take place. Beijing still considers both Tokyo and New Delhi more as regional competitors than as partners.

All these political differences explain why BRICS still suffers from a lack of coherence to form a collective stance on major regional and global security issues. BRICS could not reach any consensus on the Ukraine, Syria, North Korea, Venezuela, and maritime disputes in the South China Sea and the East China Sea.

BRICS considers reaching out to other emerging economies for either enlargement or engagement. In 2017, Mexico, Egypt, Thailand, Kenya, and Tajikistan were invited for talks to the Xiamen summit. BRICS countries also consider Indonesia as a potential candidate for the membership in the South-east Asia region. Turkey has also a chance to be partial or full member of BRICS. Turkish Deputy Prime Minister, Mr Mehmet Simsek, has indicated in April 2017 that Turkey might be a participant in the NDB to finance investment and infrastructure projects in Turkey.

At this juncture, there may be a problem for MIKTA (Mexico, Indonesia, South Korea, Turkey, and Australia) at the G20. If there is an expansion of BRICS within the G20, Mexico, Indonesia, and Turkey will be potential candidates as developing countries. Other MIKTA countries, Australia and South Korea, are potentially close to G7 as developed and established middle powers. So, any enlargement of BRICS within the G20 might signify the end of the MIKTA grouping.

Other rapidly developing countries such as Vietnam, Nigeria, Pakistan, Egypt, Iran, and the Philippines may be potential candidates for BRICS. However, all these newly emerging countries are not in the G20 and the decision to accept them to the membership would mean a strategic step for BRICS to expand its role at the global scale.

Initially, BRICS had an ambition to promote the emerging economies’ influence on global governance, and to challenge the post-WWII global order. However, there is a long way to go if BRICS is to establish itself as an alternative source of power by challenging the G7-dominated global economy.

The leaders of BRICS underlined at the Xiamen summit that the G20 continues in its role as the primary forum for international economic co-operation. BRICS leaders have also reiterated their commitments to the implementation of the outcomes of G20 summits. Brazil, South Africa, and Russia are facing serious economic difficulties, while China has endured a slowing of growth for several years in a row. Only India continues the trend of accelerated growth. All in all, it seems that BRICS aims to improve the role of emerging economies within the existing global order.

Dr Selcuk Colakoglu (scolakoglu@gmail.com) is a professor of International Relations and Director of The Turkish Center for Asia-Pacific Studies in Ankara, Turkey. 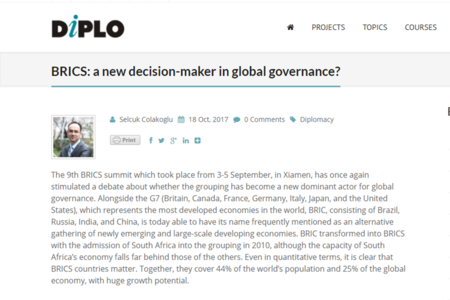