The Sino-Turkish relationship is among the fastest developing bilateral relationships in recent years. Both in terms of senior level political engagements and economic interactions, Sino-Turkish relations have entered an unprecedented era. Nevertheless how relations will evolve in the future remains to be seen. In this context the feasibility of the goals put forward by the two countries may be helpful in comprehending how  relations will evolve.

The Aim of Strategic Partnership

The year 2010 marked a peak in optimism regarding Sino-Turkish relations. Both the targets set out by the two countries and the expectations from the future were significantly high in this year. The “strategic partnership” document announced in 2010 contained targets in three basic areas. These were deepening economic partnership, overcoming political problems in bilateral relations and developing a Sino-Turkish common global vision.

Economics is the most significant area of cooperation for the two countries. China and Turkey, both considered emerging economies, share great potential for economic partnership. Therefore both Ankara and Beijing are determined to strengthen economic partnership with one another. For Turkey, China, as the second largest economy in the world, presents important opportunities in terms of joint ventures, FDI, trade volume and capital transfers. On the other hand China views Turkey both as a lucrative market and a logistic base due to its strategic location in the East Mediterranean and Black Sea basins. Ankara and Beijing’s determination to strengthen economic cooperation has also manifested itself in the numbers. In fact the trade volume of the two countries notably increased to over 24 billion dollars in 2012, with China becoming Turkey’s third largest trading partner for the years 2008-2012 after Germany and Russia. Existing data indicates that Turkish-Chinese economic partnership will experience further developments in the coming years.

The main problem the increasing trade volume presents for Turkey is the trade imbalance. Turkey’s exports to China amount to only 2.8 billion dollars while its imports from China stand at 21.3 billion dollars by 2012. When one considers China’s relative competitive advantage, this trade imbalance can be offset by encouraging transfer of FDI, capital and technology from China to Turkey. In recent years Chinese companies have shown an interest in taking part in big investment opportunities regarding mining, high-speed train and energy projects. Although for now China’s FDI in Turkey between January 2007 and June 2013 stands at $21 million, in future years this number is expected to rapidly grow. Ankara’s recent approval of a $4 billion co-production deal for a long-range air and missile defence system with a Chinese firm (CPMIEC) in September 2013 also shows that Sino-Turkish joint ventures may also occur in the defence industry.

Settlement of problematic issues at the bilateral level

In the post 1971 period, there remain some disagreements regarding issues such as Xinjiang and Taiwan that directly undermined relations. The first of these concerns is the problems of the Uyghurs, a Turkic-Muslim people living in the Xinjiang province of China. The integration problems of the Uyghur people have experienced with Beijing has negatively impacted Sino-Turkish relations due to the Turkish public’s sensitivity to this issue. The biggest disagreement concerning the Uyghur people in recent times had taken place on 5 July 2009 during the Urumqi riots. The heavy-handed response of the Chinese security forces in quashing the riots had brought about a short period of tension between Ankara and Beijing with Turkish authorities criticizing China. A few months after these incidents Turkish and Chinese authorities performed a lucid assessment of the situation and the relations were rekindled. Beijing was largely positive to Ankara’s demands that Uyghur’s political and economic rights be improved. In return Ankara refrains from undertaking initiatives concerning Uyghurs that would disturb Beijing. Ankara is convinced that an atmosphere of positive relations between Turkey and China will also have a positive impact on improving Uyghurs’ rights.

Another disagreement between Ankara and Beijing is regarding Turkey’s level of economic partnership with Taiwan. Beijing is generally wary of third countries with Taiwan and when possible tried to obstruct such relations as it believes this will bolster Taiwanese ambitions of independence. Ankara on the other hand is stuck in between benefiting from the economic opportunities presented by Taiwan and drawing greater criticism from China. Taiwan demands to undertake steps such as setting up a branch office in Istanbul under the Taiwan Ankara mission, establish a consultation mechanism at undersecretary level in both countries, signing a civil air service agreement to provide direct flight service between two countries, starting FTA negotiations in order to further strengthen economic relations with Turkey. Thus far Ankara has chosen to not respond to Taipei’s demands in order to avoid drawing criticism from China.

When the two countries had announced their target of establishing a strategic partnership back in 2010, their biggest expectation was to develop bilateral economic relations as well as forming a common global vision in international affairs. In fact during early 2000’s Turkey and China were in agreement with regards to protecting international peace and stability and facilitating a balanced and just economic development in the world. The most significant fault line in this agreement lay in the Arab Spring protests in 2011 and especially the developments in Syria. China not only opposed the NATO intervention in Libya, but also has stuck together with Russia in the UN Security Council opposing any kind of international intervention against the Assad regime in Syria. This has caused disappointment in Ankara, thus causing many to think that establishing a common global vision with Beijing had been more difficult than previously imagined.

In fact China had acted in direct contrast to Turkey during several crises in the 1990’s such as the Cyprus dispute, the Nagorno-Karabakh conflict, the Bosnian civil war and the Kosovo war. On the other hand Beijing is of the opinion that whenever international political disagreements cause China and the U.S. to clash, as a NATO member, Turkey would side with the United States and not China. Therefore the political insecurity between Ankara and Beijing hinders the development of a common global vision. However, although Ankara and Beijing adopt different attitude to international political issues, they have agreed to not reflect this on bilateral relations. In other words during the disagreements that were experienced in 2011 with regards to the Arab Spring, both sides have communicated its position and have chosen to mutually respect one another’s position. In this regard, bilateral economic cooperation has continued to develop without any hindrance after 2010.

At the current juncture Sino-Turkish relations have reached a notably advanced level. The bilateral relations have gained global significance. However the target of developing a “strategic partnership” as articulated by Ankara and Beijing in 2010 has been rather unsuccessful particularly with regards to developing a common political vision. Alongside this Turkey and China have agreed to not let crises that arise from reasons unrelated to the two countries affect bilateral relations. One can observe that Ankara and Beijing have developed a mutual trust mechanism in order to avoid disagreements that may arise from Xinjiang and Taiwan affecting bilateral relations. One can also comfortably say that Turkey and China have become strategic partners in the context of economic relations and the economic partnership is expected to further develop and deepen in the future.

Prof. Dr. Selcuk Colakoglu is a Visiting Research Fellow at the Near East – South Asia Center for Strategic Studies at National Defense University in Washington, D.C., United States and Director of USAK Center for Asia-Pacific Studies in Ankara, Turkey. 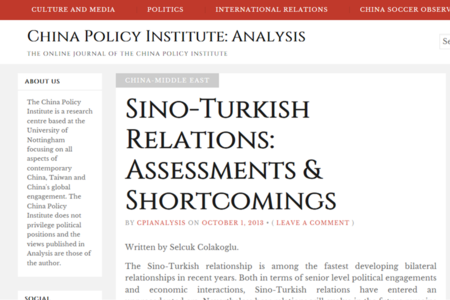