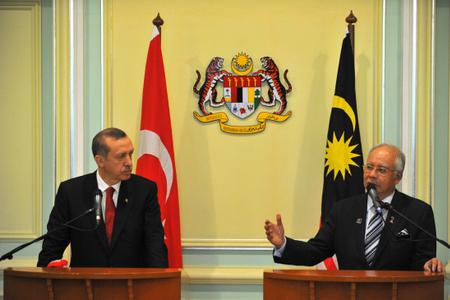 A New Page in Turkey-Malaysia Relations

Turkey established diplomatic relations in 1964 with the Federation of Malaysia, which had gained its independence in 1957. Until today, Turkey and Malaysia have adopted similar attitudes toward many regional and international issues from within international organizations such as the United Nations, the Organization of Islamic Cooperation and the D-8. So far, high-level visits between the two countries at the head of state and head of government levels have taken place twice and six times, respectively. The last high-level visit was made by Turkish Prime Minister Recep Tayyip Erdoğan to Malaysia on 10 January 2014. The year 2014 is also important for bilateral relations in that it corresponds to the 50th anniversary of the establishment of diplomatic relations between Ankara and Kuala Lumpur.

There are no concrete problems between the two countries; however, relations were partially overshadowed due to an incident pertaining to domestic political developments in Malaysia between 2008 and 2013. Anwar Ibrahim, the leader of the opposition party called the People’s Pact (Pakatan Rakyat), took shelter in the Turkish Embassy in Kuala Lumpur because he was accused of sodomy and his life was therefore under threat. Even though Anwar Ibrahim did not submit a request for political asylum in Turkey, this incident caused a minor crisis between Turkey and Malaysia. The government formed by the National Front (Barisan Nasional), which has been ruling the country since it gained independence, got the impression that the Turkish government was supporting the opposition led by Anwar Ibrahim. This impression notwithstanding, Malaysia continued to take policy measures to carry bilateral relations a step further. In this respect, the visit by Malaysian Prime Minister Najib Tun Abdul Razak to Turkey in February 2011 was of utmost significance. During this visit, the two parties reached a consensus to embark on a strategic partnership. However, because neither the Turkish President nor the Turkish Prime Minister paid a visit to Kuala Lumpur in return until the general elections of 5 May 2013, Najib’s government got the impression that Erdoğan’s government was still backing the Malaysian opposition led by Anwar Ibrahim. The reelection victory of Najib’s National Front in the general elections once again created the need to make a new start in bilateral relations.

In this respect, the fact that Prime Minister Erdoğan made one of his initial visits in the beginning of 2014 to Malaysia was a constructive step toward mending and rejuvenating bilateral relations. Prime Minister Erdoğan met with King Tuanku Abdul Halim Mu'adzam Shah and Malaysian Prime Minister Najib. The two countries signed a declaration on the Framework for Strategic Cooperation in order to boost bilateral relations on a wide array of fields, including politics, trade, education, and security. Ankara and Kuala Lumpur also mutually agreed to lift visa requirements. The two leaders further converged on the idea that Turkey and Malaysia should take the initiative in encouraging other Muslim countries to seize upon democracy.

Among ASEAN countries, Malaysia is one of Turkey’s longstanding partners. In this respect, the significance and potential of bilateral relations is apparent. While the bilateral trade volume was $122 million in 1990, it reached $308 million in 2000 and $1.444 billion in 2012. The peak of bilateral trade was reached in 2011, at $1.751 billion. Therefore today, it would be accurate to claim that bilateral trade volume has kept to slightly below $2 billion. That said, Erdoğan and Najib reached an agreement to jointly initiate an endeavor aimed at raising the volume up to $5 billion. Another problem with the bilateral trade between Turkey and Malaysia currently—which is at a relatively low level when the two countries’ economic sizes are considered—is that it is also imbalanced to the detriment of Turkey’s current account balance. In 2012, Turkey imported merchandise worth $1.4 billion from Malaysia while it could only export goods worth $166 million to its counterpart. Therefore, rendering a more balanced bilateral trade is as important to Turkey as increasing the volume of bilateral trade up to $5 billion.

Another step which would boost bilateral trade would be signing a free trade agreement (FTA). Erdoğan and Najib agreed to sign an FTA in April 2014 after concluding continuing bilateral negotiations. Malaysia had initiated FTA negotiations with the European Union in 2010, and these negotiations are still ongoing. Turkey, which is a party to the EU’s Customs Union, should reach an FTA with Malaysia before Kuala Lumpur and Brussels embark on a separate FTA. That is the only way to avoid negative effects of a probable FTA between the EU and Malaysia.

Foreign direct investment (FDI) is also a measure which can deepen economic cooperation between Ankara and Kuala Lumpur. In particular, the trade imbalance’s negative effects on Turkey can be offset by Malaysian companies investing in Turkey. Investments by Malaysian firms in Turkey have become more prominent in recent years. In 2012 when Malaysian investments in Turkey leapt forward to $461 million, Malaysia became one of the top ten countries investing in Turkey. Malaysian Prime Minister Najib has expressed that some large Malaysian firms have decided to invest in Turkey in the period after 2014. According to his statement, a public firm, Khazanah Nasional Bhd, will invest $1.5 billion in various sectors while Malaysia Airports Holding Bhd (MAHB) will invest $400 million in the aviation sector. Moreover, Malaysian companies decided to invest a total of $1.1 billion in Turkey’s healthcare sector in the upcoming years. Najib also indicated that his government was working on a specific task to identify the sectors in which Turkish investors can pave their way to success in Malaysia. Moreover, Erdoğan and Najib reached an agreement regarding cooperation with third parties in the fields of Islamic finance, tourism, and cultural exchanges. If such large investments are increasingly realized, it will be possible for Turkey and Malaysia to build a strong economic partnership.

Turkish Airlines decided to arrange four direct flights a week between Istanbul and Kuala Lumpur once again by 2014. It is also planning to arrange daily flights between the two cities after a while later. Increasing the number of reciprocal flights was one of the final decisions of the meeting between Erdoğan and Najib.