By Selçuk Çolakoğlu, Professor of International Relations and Director of the Turkish Center for Asia-Pacific Studies, Ankara, Turkey. scolakoglu@gmail.com

General Assessments of the Johannesburg Summit

The leaders at the Johannesburg Summit underlined the importance of enhancing BRICS financial cooperation to better serve the real economy (concerned with producing goods and services, rather than transactions in financial markets) and to meet the development needs of BRICS countries. BRICS members specifically stated their support for the newly signed African Continental Free Trade Agreement and for the African Union’s Agenda 2063. The leaders also reiterated their commitments to the World Trade Organization (WTO) to ensure greater communication and cooperation between financial sector regulators.

The massages coming out of the Johannesburg Summit seemed mostly directed at US unilateral trade tariffs imposed or threatened by the Trump Administration. Compared to the confrontations between the United States and its economic allies at the G7 Summit in Canada in early June 2018, the BRICS Summit in South Africa emphasized greater cohesion for reaching the group’s targets and a more unified stance on many global issues.

With the conclusions of the Johannesburg Summit, the BRICS countries now arguably have the moral superiority over their economic rival – the G7. There is also an expectation that the BRICS, along with the G7 (minus the United States) and MIKTA (Mexico, Indonesia, South Korea, Turkey, and Australia) will move towards greater cooperation, contrary to increasing American unilateralism in international trade, at the upcoming G20 Buenos Aires Summit on September 26-28, 2018.

BRICS leaders also called for South Africa, Brazil and India to play a greater role in the United Nations, without providing explicit support to Pretoria, Brasilia, and New Delhi for their respective efforts to secure permanent seats on the UN Security Council. Despite the aforementioned unity, this indicates that BRICS countries continue to have very deep differences regarding UN Security Council reform.

“BRICS Plus” and the Potential Enlargement of the BRICS Grouping

One of the most interesting subjects surrounding the Johannesburg Summit was the future enlargement of the grouping. The “BRICS Plus” idea was initiated by China to set an agenda for possible enlargement of membership at the 2017 BRICS Xiamen Summit. Beijing’s initial proposal seemed to imply an expansion of the group, which some of the other BRICS members have staunchly resisted. South Africa took the idea forward by holding a “BRICS Plus” meeting at the Johannesburg Summit.

Mexico, Egypt, Thailand, Kenya, and Tajikistan were invited for talks at the 2017 Xiamen Summit. Angola, Argentina, Botswana, the Democratic Republic of Congo, Egypt, Gabon, Lesotho, Madagascar, Malawi, Mozambique, Namibia, Rwanda, Senegal, Seychelles, Tanzania, Togo, Turkey, Uganda, Zambia, Zimbabwe and Jamaica were BRICS Plus participants at the 2018 Johannesburg Summit. Rapidly developing countries such as Indonesia, Mexico, Vietnam, Nigeria, Pakistan, Egypt, Iran, and the Philippines may be potential BRICS candidates. However, some of these emerging economies are not in the G20, and the decision to accept their membership would mean a strategic step for the BRICS to expand its role at the global scale. If the BRICS keep the enlargement process within the G20, only Indonesia, Mexico, Turkey, and Argentina could be potential members of the BRICS. So, any enlargement of the BRICS within the G20 might signify the end of the MIKTA grouping.

“BRICS-T”: Will Turkey Join the BRICS?

Ankara has demonstrated diplomatic activism in international relations. Being a full member or an observer member of international/regional organizations/forums is considered by Ankara as a way to provide leverage for Turkey’s economic and political interests globally. Turkey was invited to the Johannesburg Summit under the framework of the “BRICS Plus” initiative as Chair of the Organization of Islamic Cooperation (OIC), not as an individual country. Nevertheless, Turkey used the opportunity to find ways to maximize economic and political ties with the BRICS countries. The Turkish presidencydescribed Turkey’s participation in the summit as Ankara’s first high-level contact with the BRICS. Turkish President Recep Tayyip Erdoğan went so far as to call on the leaders of the BRICS to allow Turkey to join the grouping at the Johannesburg Summit.

However, Turkey is already a member of an alternative organization. MIKTA is a middle power grouping aiming to balance the G7 and BRICS dominance in the G20. Without leaving MIKTA, Turkey’s prospective BRICS membership may create a conflict of interests. Turkey’s interest in the BRICS mostly depends on the financial opportunities provided by the New Development Bank (NDB) and other funds, rather than membership itself. Turkish Deputy Prime Minister, Mehmet Şimşek, indicated in April 2017 that Turkey might be a participant in the NDB to finance investment and infrastructure projects in Turkey.

Moreover, BRICS countries are developing economies and have different economic priorities than the relatively more developed Organization for Economic Co-operation and Development (OECD) countries. As a member of the OECD, NATO and the EU’s customs union, Turkey is arguably part of the West economically and politically. Within this context, Turkey’s global position is not closely aligned to the BRICS’s international vision. Thus, for the time being, Turkey is not on the shortlist for new members if there was to be an enlargement of the BRICS in coming years.

However, Turkey’s geostrategic gravity has been moving gradually eastward, from NATO to the Eurasian powers, Russia and China. And Turkey’s possible continuing participation to BRICS summits does not necessarily mean an axis-shift for Ankara. For example, IBSA (India, Brazil, and South Africa) countries within BRICS also have good relations with the United States and other Western countries.

If Turkey joins the BRICS, Ankara may become a potential facilitator between developed and developing economies under the concept of North-South cooperation. As a middle power, Turkey has certain limitations to develop and implement a unique global agenda under the framework of the G20 and MIKTA. Turkey’s G20 Presidency in 2015 and its MIKTA’s Chairmanship in 2017 reflected similar shortcomings for middle powers to be able to set the global agenda. All in all, Turkey’s potential membership to the BRICS could contribute some benefits to both sides, but an expectation of major changes is not a realistic outcome under current circumstances.

Interested in contributing to the Global? Please consult the submission criteria or simply drop us a line at globalgovernance@graduateinstitute.ch. 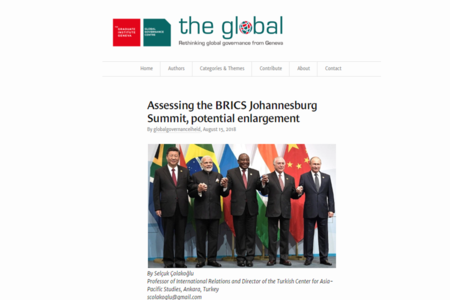