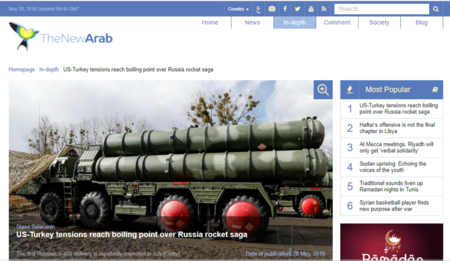 After months of repeated warnings, the US has suspended the delivery of Lockheed Martin F-35 Lightning II jets parts and programme materials to Turkey, what has been seen as the first step toward ending of the actual aircraft sale.

The US Defence Department says deliveries will not resume unless Ankara abandons its planned acquisition of a Russian missile defence system. The first Russian S-400 delivery is reportedly expected in July.

US officials have also expressed concerns over Turkey's acquisition of both US and Russian systems as this could give Moscow access to sophisticated American technology and allow it to find ways to counter the F-35.

Instead of purchasing S-400s, US has pressed Turkey to buy an American-made air defence battery, and in December the State Department approved the sale of a $3.5 billion US Patriot system to Ankara.

But according to many, US Patriots are no match to Russian "super weapon". The Russian S-400 SAM, known as the "Triumf" at home and better known to NATO as the SA-21 "Growler," is the most capable and lethal long-range air defence missile system on the planet. It is designed to destroy aircraft, cruise, and ballistic missiles, including medium-range missiles, and can also be used against ground objectives.

No solution on the horizon

The ongoing dispute signals broader political tensions that will be hard to solve and which may have heavy consequences. According to Professor Selcuk Colakoglu, director of the Ankara-based Turkish Centre for Asia Pacific Studies, "if Turkey finalises the S-400 purchase, there will be a severe political crisis between Washington and Ankara."

The acting Pentagon spokesman Charles Summers Jr has been clear that Turkey's acquisition of the S-400 is unacceptable. Moreover, the US Vice President Mike Pence described the Russian-Turkish deal as "deeply troubling" saying it "poses a great danger to NATO."

However, the ruling Justice and Development Party – commonly known as the AKP and Turkish government officials made clear that they will stay firm to fulfil its commitment and purchase the Russian S-400 missile system.

Professor Colakoglu noted that according to some rumours in Ankara, Turkey may seek alternative solutions from the unpacking of the Russian missiles after delivery to Turkey or selling them to a third country like India, Iran, Qatar, Azerbaijan, and Venezuela or deploying them the Turkish military base in Somalia.

"This only indicates how the AKP government is desperately seeking an alternative solution without souring relations with the United States," he told The New Arab. However, the Trump Administration has recently said that the United States is against not only deployment of the S-400 but also its purchasing. So, soft-landing of the escalated crisis between Ankara and Washington has become less likely, if both sides keep their positions inflexible.

Moreover, US Vice President Mike Pence warned Turkey that it seriously risks expulsion from the Joint Strike Fighter (JSF) programme what be a serious blow for Turkish companies involved in this programme. Additionally, he also mentioned the possibility of broader retaliation measures.

But Turkey's involvement in F-35 project is a part of its long-term air defence strategy. So, jeopardising the participation in F-35 project due to the purchasing S-400 is closely linked with Turkey's long-term national interests. It is likely that Ankara ultimately chooses to save its assessments over the F-35 project if Washington keeps its firm stance since, according to Professor Colakoglu, since Turkey does not have "plan B" in the short term.

According to latest reports, the Pentagon has already started looking for new sources of supply which would replace some 800 Turkish-produced parts for the F-35.

Rockets are tip of the iceberg

While the purchase of the Russian S-400 air-defence system, makes the unprecedented case, which according to some, threatens the NATO security system, the dispute reveals deep cracks between traditional allies.

It also proves the major misconception in the recent US and Western attitude towards Turkey. The ongoing dispute is only the tip of the large iceberg made of complex issues which Tukey perceives to be neglected. Thus, the S-400 deal with Russia could be understood as a response to those who have ignored the vital internal and external security interests of Turkey. And the more the Turkish core interests are ignored the greater is the chance that Turkey will be pushed to Russia's (and possibly) China's embrace.

This brings us to the matter of mistrust and sincerity among once close allies. Turkey repeatedly tried to buy modern mid-range air defence system from its NATO fellow members, but Turkish pleas fall on deaf ears. Only then, Turkey decided to purchase the S-400 system in 2017.

Meanwhile, Germany and the US have removed their Patriot systems from Turkey leaving the country vulnerable to foreign threats. Thus, from Ankara's perspective, acquiring the advanced air-defence system is a matter of survival and urgent need. Although Pentagon eventually approved the export of Patriot system in January, Ankara cannot accept to be a hostage of its NATO allies, primarily the US, which have been using the carrot and stick tactics to press the Turks. But this is not the way to deal with an ally.

Additionally, some Turkish analysts argue that Turkey could not accept the US offer since it did not include either a loan agreement or a pact to share the system's technology.

But more importantly, the ongoing rocket saga reveals a much broader issue: US and Turkey do not share common interests and differently understand the regional issues. Turkey repeatedly urged the US to stop supporting groups, such as PKK-affiliated arm militias in Syria, which Ankara sees as a major threat to its security and sovereignty. The tensions especially increased after a US refusal to extradite a US-based preacher Turkey blames for a 2016 failed coup.

The high price of disobedience

But Turkish stubborn stance may cost them dearly. Professor Colakoglu warned that even a rumour about the occurrence of a big issue with a big Western ally was enough to make the Turkish financial system uneasy. When the Trump administration imposed some symbolic sanctions to Turkey in August 2018 during the pastor crisis, the Turkish lira experienced a historic free fall.

In early January, a single Trump tweet seriously shook the Turkish financial market again. From there, "the US have enough leverage to destabilise the Turkish economy if the AKP government ignores warnings and proceed with purchasing of the S-400," Colakoglu added. It is also very likely that the purchase of S-400 will trigger sanctions under the Countering America's Adversaries Through Sanctions Act (CAATSA). This would have a devastating effect on overall US-Turkey relations and intra-NATO defence cooperation.

On the other hand, Professor Colakoglu observes that Russia has no capacity to subsidise Turkish economic loss, in the case of US-Turkey greater crisis outbreak. He believes that due to a very high degree of Turkish and its dependence on a Western financial system the AKP government will likely refrain itself from radical measures that could lead to the introduction of potential US sanctions.

As a sign, the Turkish military was very eager to participate in recent NATO military exercises with relatively large capacity in the Baltic Sea, the Black Sea and the Mediterranean in order to confirm its commitments to the alliance.

Between hammer and anvil

So, is it possible that the S-400 purchase has been used as a bargaining chip of Turkish diplomacy to press the NATO and US as well as to address other issues? Quite possible, but Professor Colakoglu recalls that the AKP government tried the same bargaining tactic when it tried to acquire air defence system from China in 2013, but after huge pressure from NATO Ankara cancelled the deal with Beijing in 2015.

At the same time, it is rather unclear what is to expect in the case Turkey breaks the deal with Moscow. There is an expectation that Russia may offer a delay to Turkey for a certain period to avoid a confrontation with the United States or that Ankara offers Moscow to re-sell the S-400 to a third country.

But Professor Colakoglu told The New Arab that Moscow has already expressed their concern whether the AKP government can keep its promise to purchase the S-400. It is assumed that Turkey's purchase of the S-400 is around $2.2 billion and Ankara already paid $1.1 billion of it to Russia.

However, if Turkey proceeds with the purchase it will likely feel the pain of the sanctions and enormous pressure from the US. Since Turkey's annual oil and gas imports from Russia are worth around $10 billion, any introductions of the US sanctions and economic crisis resulting from it may directly affect the Russian energy income and would not be a desirable outcome for Moscow either.

It seems that Turkey has now found itself between the hammer and anvil and it will take a lot of diplomatic skills to find a way out from this unpleasant situation.

Stasa Salacanin is a freelance journalist who has written extensively on Middle Eastern affairs, trade and political relations, Syria and Yemen, terrorism and defence.