Last year was a golden year in Turkish-Japanese relations. Normally, Japanese prime ministers only visit Turkey every 10 or 15 years; however, in 2013 two prime ministerial visits were made from Japan to Turkey. During his May 2013 meeting in Turkey, Japanese Prime Minister Shinzo Abe joined a signing ceremony to entrust the Sinop Nuclear Power Plant, which was won by the Japanese Mitsubishi and French Areva Consortium. Abe’s second visit, on the 29th of October 2013, was at the opening ceremony of Marmaray, which connects Asia to Europe under the Bosporus with a Japanese-built rail system. Because of this, Turkish Prime Minister Recep Tayyip Erdoğan made his first visit of 2014 to Japan between the 7th and 9th of January, so his visit was reciprocal and also an indicator of how much Turkey cares about its relations with Japan. This was the second visit by Prime Minister Erdoğan to Japan since 2004. In a short period of around 9 months, there were three prime ministerial visits between Turkey and Japan, which constitutes a turning point in Turkish-Japanese relations in which they are returning to their character in older times.

During the Cold War, Japan was Turkey’s biggest economic partner in East Asia. After the 1970s, Japanese companies started to get involved in infrastructure projects in Turkey. However, in the last 15 years, both the bilateral trade volume and Japan’s investment in Turkey slowly went down. In 2012, although the bilateral trade volume reached $3.9 billion, Japan was only the fourth biggest East Asian economic partner of Turkey, after China, India, and South Korea. Even so, in January 2007 and June 2013, Japanese foreign direct investments (FDI) in Turkey reached $940 million.

With the increased amount of high-level visits over the last year—compared to their usual relations—the governments intended to carry their relations a step forward. The Abe administration sees big projects in Turkey as an opportunity to refresh the Japanese economy, and thinks of Turkey as a strategic partner in the Eastern Mediterranean and Black Sea regions. Turkey assesses Japan as an important partner in terms of high-tech and reliable technology, and as a source of foreign investments. However, although Ankara has assessed Japan like that since the 1960s, Tokyo had been cautious about making big investments in Turkey. The degree to which the new Japanese foreign policy under Prime Minister Abe has contributed to the gain in momentum in Turkish-Japanese relations over the last year is very large. It was therefore not a coincidence, that Turkey and Japan signed a strategic partnership in May 2013.

In the coming period, bilateral economic relations are expected to continue with big projects. First of all, in the next years the construction of the Sinop Nuclear Power Plant, worth $22 billion, will provide continuous and intensive cooperation between the two countries. Furthermore, the TÜRKSAT 4A satellite, made in Japan by Japanese companies, will soon enter into service. The TÜRKSAT 4A satellite formed a good basis for cooperation between Turkey and Japan in the area of aviation and aerospace industry. The Izmit Bridge Passing project, which is being made by Japanese companies, will be the world’s fourth longest suspension bridge. Ankara called Japanese companies again to construct a planned bridge across the Strait of Çanakkale (the Dardanelles).

In order to further develop their trade relations, Turkey and Japan agreed to start talks about a Free Trade Agreement (FTA) in 2014. Because of Turkey’s membership in the European Union’s Customs Union, it cannot independently sign FTAs with third countries. Turkey can, however, sign FTAs with third countries if the EU has signed them. Negotiations on a FTA between Japan and the EU started in 2013, but they remain unresolved. Ankara and Tokyo started this year with negotiations on the FTA; they are planning to hold negotiations parallel to those of the EU-Japan FTA.

Turkey and Japan have relations rooted in history, going all the way back to the 19th century. 2014 is the 90th anniversary of the establishment of diplomatic relations. After the Republic of Turkey was founded, on the 29th of October 1923, Japan quickly established regular diplomatic relations with Turkey. 2015, though, is the 125th anniversary of the disaster of the Ertuğrul Frigate. In 1890 Ottoman Sultan Abdulhamid II sent a medal with a frigate commanded by Osman Pasha to be delivered to Japanese Emperor Meiji. On the return trip, the Ertuğrul Frigate, carrying the Turkish delegation on board, was caught in a storm and sank off the coast of Japan. The crew originally consisted of 540 people, but just 64 of them were rescued. It was a turning point in the Turkish-Japanese friendship.

As a result of these anniversaries many events are being planned in cities across Turkey and Japan during 2014 and 2015. The two countries agreed to create a film project which will tell about the friendship between Turkey and Japan after the disaster of Ertuğrul Frigate. The project will be implemented in 2014.

At this visit, they decided to found the Turkish-Japanese Science and Technology University in Istanbul. With this university, they expect that people will learn not only the Turkish and Japanese languages, but also their cultures. Thus, they intend to develop personnel who can work in Turkish-Japanese companies.

The limits of political affiliation

Although bilateral, political, and economic cooperation have huge potential for growth, there are some limitations on cooperation on regional and international issues between Ankara and Tokyo. During Prime Minister Erdoğan’s visit to Japan, problems in the Middle East such as Syria and Egypt were the main topic of conversation. The Turkish government expected that Tokyo would be able to support Ankara on Middle East policies. However, Tokyo traditionally follows American policy about international security issues; it toes Washington’s line and won’t deviate from this strategy. In this situation, Turkey and Japan can cooperate in the Middle East according to the policies of the United States and NATO. Japan can only cooperate with Turkey to help it overcome the Syrian refugee crisis.

Building a Turkish-Japanese common approach for East Asian issues seems difficult too.. Much like it does with Japan, Turkey has deep political and economic relations with China and South Korea. Ankara chose to be neutral on the dispute between Tokyo and Beijing about the Senkaku/Diaoyu Islands located in East China Sea. Turkey expects to stay far away from tensions between China and Japan. The Dokdo/Takeshima island between Japan and South Korea, also the Sea of Japan/East Sea denomination create problems among them. Although these maritime disputes seem less sensitive than the Japan and China issues, Tokyo and Seoul still haven’t resolved them. Turkey has deep-rooted relations with South Korea just as it does with Japan, and it has always chosen to remain neutral in these disputes. Therefore, Ankara is one of the capitals which feels uncomfortable about these tensions between Tokyo and Seoul. In this respect, as Turkey improves its relations with Japan, it will also try to positively develop relations with China and South Korea. 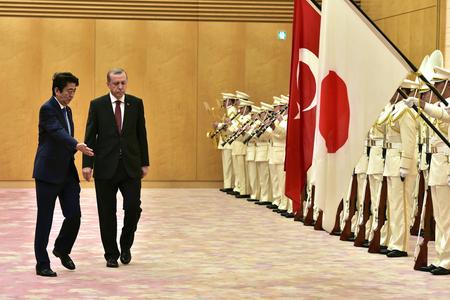