North Korea After the UNSC Sanctions

​For the last few months, Asia has seen a number of heightened risks stemming from a series of reckless actions undertaken by North Korea. Despite Pyongyang’s assertive declaration that it successfully tested a hydrogen bomb in January 2016, international experts are still not convinced of the secluded regime’s ability to attain such a high degree of technological capacity, and instead believe it more probable that Pyongyang has carried out its fourth nuclear test. Likewise, when Pyongyang claimed to have launched a satellite into the earth’s orbit in February 2016, international experts suspected that the North’s may have instead been testing a long range ballistic missile. In any case, we are confronted with the terrifying reality that the recalcitrant regime in Pyongyang possesses a growing arsenal now including nuclear warheads along with short, medium, and long range ballistic missiles. On top of this, Pyongyang sees no harm in pushing both its nuclear and intercontinental ballistic missile programs further in full view of a global audience. T situation has already begun to pose a severe threat with potential repercussions exceeding far beyond Asia to fuel anxiety around the globe.

As one may remember, Pyongyang withdrew from the Six Party Talks with the U.S., China, Russia, South Korea, and Japan in 2009. The negotiations in question were aimed at the transformation of North Korea’s military-oriented nuclear program into a peaceful program focused on energy generation. Since withdrawing, alongside successive tests of nuclear weapons and ballistic missile, North Korea has also been carrying out attacks against South Korean targets lying in close proximity to the border between the two nations. In 2010 one attack even hit a South Korean warship, leading to the deaths of 46 naval personnel aboard. North Korea also shelled the South’s Yeonpyeong Island the same year, killing two civilians along with two soldiers.

Pyongyang has long been relying on its traditional allies, i.e. Russia, and particularly China, when taking aggressive steps. Aware of its key strategic value for China as a buffer state against American military presence in South Korea and Japan, it used to making finely-tuned adjustments as far as cyclical shifts within such a sensitive balance of power allowed. Pyongyang’s “strategy of controlled tension” can be summarized as efforts at escalating tensions with the U.S., South Korea, and Japan before sitting back at the negotiation table in order to capitalize on the potential of the growing rift as a bargaining chip. Neither Russia nor China actually want to see North Korea develop nuclear weapons and long range ballistic missiles. China is particularly anxious about such muscle-flexing on the part of North Korea in that this amplifies security risks in the region while providing justification for further American military build-up in South Korea and Japan. Certain that Beijing cannot afford to forsake their relationship under any circumstances; Pyongyang has consistently boosted its diplomatic capacity through the manipulation of great power rivalries. As for Moscow, the state formerly backed Beijing’s policies towards Pyongyang under the United Nations Security Council (UNSC).

What needs to be highlighted here is the apparent time lag between North Korea’s embarking on its strategy of intimidation back in 2009 and the policy readjustment by Russia and China, which came into play only recently. Firstly, bilateral relations between Beijing and Pyongyang have steadily deteriorated since Kim Jong-un assumed North Korea’s leadership in 2012. When North Korea’s founding father Kim Il-sung died in 1994, his son Kim Jong-il succeeded him. Both leaders are known to have taken great pains in maintaining amiable relations with their traditional allies, Moscow and Beijing. However, after assuming leadership after his father’s demise in 2012, the young Kim Jong-un has steered his country away from China, thus alienating Pyongyang’s main ally. Indeed, he went so far as to purge high profile figures among the North Korean leadership whom he suspected of cultivating close ties with Beijing in a vicious and publicized defrocking.

The U.S., Japan, and South Korea have increased their pressure on China since Pyongyang’s nuclear and ballistic missile tests picked up pace earlier this year. In the meantime, joint military drills between the U.S. and both Japan and South Korea have been held on a more frequent basis. Coupled with America’s insistence on deploying the THAAD missile shield system in South Korea, emerging circumstances in the region are a source of deep concern for Chinese decision-makers. The THAAD issue particularly bothers China as the system’s range would cover not only North Korea, but also China’s littoral provinces, were the missiles installed on South Korean territory. Already enmeshed in heated disputes over maritime territory in the East China Sea with Japan, and the South China Sea with various ASEAN countries (Vietnam and the Philippines first and foremost), China does not want desire further exacerbation of regional friction. On top of this, any provocative attempt by Pyongyang could result in a military intervention by Washington. If this happens, China could possibly be drawn into a direct military confrontation with the U.S., Japan, and South Korea despite all efforts to avoid this worse-case scenario. Therefore, Beijing endorsed heavier UNSC sanctions in order to mollify rising tensions and convey a clear message to Pyongyang that “enough is enough”. Russia’s backing of the resolution jointly drafted by the U.S. and China has driven North Korea into the corner. The common stance adopted against North Korean belligerence by China and Russia is intended to narrow the former’s elbowroom in such a way as to leave it no choice but to return to the negotiation table.

In accordance with the course of action that was adopted by the UNSC on March 2, 2016, a ban has been imposed on North Korean exports and imports of almost all tradable items with the exception of foodstuffs and medicine. The embargo on Pyongyang covers key industrial resources such as coal, iron, iron ore, gold, titanium, and rare-earth minerals. Alongside a ban on the trade of small and light weaponry with North Korea, all kinds of aerial vehicles and marine vessels have also been banned from registering in the country. All North Korean financial accounts suspected of having any association with the country’s nuclear and ballistic missile programs have been frozen. Moreover; all banks and other financial institutions are banned from setting up offices within the borders of North Korea, while no single country is permitted to host any offices of North Korean banks or other financial institutions within their borders. Each UN member is granted authorization for the imposition of this long list of sanctions. Indeed, the Philippines confiscated a North Korean freighter for a legal investigation immediately after the UNSC sanctions were announced. The attitude of Russia, and particularly that of China, considering that both share land borders with North Korea, will determine whether the latest round of sanctions can prove successful in deterring the hermit regime from further belligerent action. At the end of the day, North Korea will not stand much chance of resisting concentrated efforts should China, i.e. its main financial patron and largest trade partner, firmly implement the UNSC decision.

What will Pyongyang do next?

In the aftermath of the UNSC decision to impose sanctions on North Korea, the real question is was what kind of a reaction Pyongyang will give. In this respect, North Korea has to make a tough choice between two mutually-exclusive options: it can either comply with the decision and agree to re-initiating the Six Party Talks, or it can stick with its current policy of flaming tensions through noncompliance. Considering that it carried out a short-range ballistic missile test on the very same day as the UNSC decision and publicly declared that it had recently developed a compact and light nuclear warhead that can be mounted on ballistic missiles only a week after, early signs indicate the country is in favor of further flaming tensions. However, international experts believe that North Korea cannot maintain its current policy of defiance in the face of Russian and Chinese objection. Of course, such conviction is essentially based on the assumption that the recalcitrant leadership of North Korea will continue to act as a rational strategist. As to the alternative scenario, this is something nobody cares to consider. 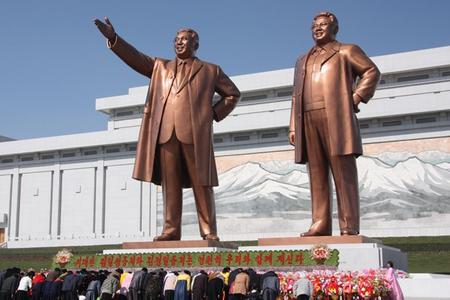