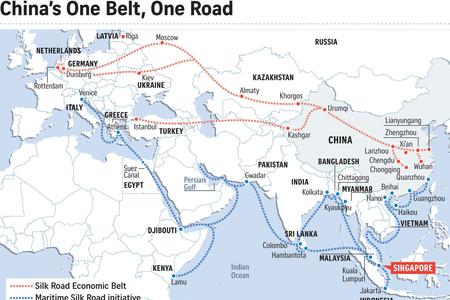 Is China’s Silk Road Project An Effort To Promote Peaceful Development Or Quest For Hegemony?

Since the end of the Cold War and the collapse of the Soviet Union, many projects have been put forward with the aim of integrating Central Asia into the global community. Most of these projects have been introduced with initiatives referring in some way or another to the historic Silk Road. In this sense, different actors have developed their own initiatives under different names, whether it be Turkey’s “Modern Silk Road”, the United States “New Silk Road”, or the European Union’s “Silk Wind”. Russia, who wants to maintain its influence in Central Asia in the post-Soviet era, has come to successfully develop and implement the “Eurasian Union”, while South Korea and Japan have proposed their own projects under the respective headings of the “Eurasia Initiative” and the “C5 + 1”.

One Belt, One Road

One of the most acclaimed Silk Road projects is the “One Belt, One Road” initiative put forward by China. This project, which was first formulated by Chinese President Xi Jinping in 2013 during a trip to Central Asia, has resonated with both the region and the wider globe. In addition, both in terms of its financing and the geographical area that it covers, this project has increasingly become the object intense discussion. In this sense, it may be useful to elaborate on two fundamental points of the Chinese project that differentiate it from those initiatives led by other countries.

First of all, China’s project spans a much wider geographic area. Turkey, the EU, South Korea, and Japan have all developed their projects around the route of the historic Silk Road, in short, targeting the Caspian and Black Sea basins. The US’s project seeks to integrate Central Asia and South Asia via Afghanistan, thus opening the group to the world, while Russia’s Eurasian Union can be seen as being based on the conservation of the former Soviet bloc.

China’s project, on the other hand, spans almost the entire Asian continent, even extending as far as East Africa and Europe. Here, China’s Silk Road project encompasses two major geographical expanses: the first follows the historical Silk Road through Central Asia, north to Russia, and eventually to Europe, while the other passes through Iran and Turkey to the south.

Unlike other countries’ initiatives, China’s project also includes a “Maritime Silk Road”, covering Southeast Asia, South Asia, East Africa, and Europe. The route of the projects begins in the South China Sea, passing through the Malacca Strait, the Indian Ocean, and the Red Sea before eventually ending in the Mediterranean Sea to the south of Europe.

Integration of markets and manufacturing

China’s “One Belt, One Road” initiative, beyond being a simple transport corridor, envisages economic integration of the countries along its path. The first of the five basic areas of cooperation envisioned in the project is based on the integration of transportation systems. To this purpose, railways, highways, airways, and ports will be developed and integrated with one another, and if necessary, new railways, highways, airports and seaports will be constructed. Second, the capacity of involved countries to develop urban infrastructure will be increased by developing their domestic markets and working towards their further economic integration.

Third, the project also maintains the purpose of promoting the joint use of energy and natural resources as well as their extraction operations. The development of oil, natural gas, rubber, and metal resources, the operation of industrial plants, such as those processing cotton, and the construction of oil and natural gas pipelines will be key areas of investment and cooperation with the framework of the “One Belt, One Road”. The fourth area of cooperation is the institution of organized industrial zones as well as the establishment of agricultural production and farm operations. Fifthly, the project will focus on the facilitation of appropriate development initiatives that work to fulfill the needs of countries along the Silk Road. Accordingly, , as a country that has implemented its own successful model of development, China is seeking to export its own experience while also providing material support for relevant projects.

As can be seen, China’s “One Belt, One Road” initiative foresees the installment of a wide-range cooperative efforts, from infrastructure to developmental aid. Such is quite significant when considering that the Silk Road projects put forward by other countries have just been satisfied with developing their targeted country’s transportation infrastructures and integration into the world market by way of trade liberalization.

The biggest difference between China’s Silk Road initiative and those of other countries is its generous budget. So far, Beijing has committed to allocate $40 billion of resources to the project from its Silk Road Fund. This is the highest figure for any Silk Road project. Also, in 2015 the China-led Asia Infrastructure and Investment Bank (AIIB) was established, and here, China plans to use the Bank’s$50 billion fund primarily for the Silk Road project. The possibility that the AIIB’s funds can be used in such a way seems quite likely, especially when taking into account that the initiative covers nearly the entirety of the Asian continent. A third source of revenue for the project will be a total sum of $62 billion that Beijing is considering transferring to the coffers of the “One Belt, One Road” initiative from the China Development Bank, China Exim bank, and the Agricultural Development Bank of China. Taken in total these contributions amount to around $152 billion, thus making the sheer size of the project’s budget an object of greater attention than the content of the project itself.

Is this China’s Marshall Plan?

China’s “One Belt, One Road” initiative has also received the support of countries throughout the region. In particular, countries like Myanmar, Bangladesh, and Pakistan which face development problems and challenges in integrating into foreign markets are very interested in the project. Likewise, developed countries such as those of the EU see this project as a new opportunity to revive their own economies and to provide for new initiatives. On the other hand, some important players consider the project as an attempt by China to snatch regional and global hegemony. As China’s continues its path towards regional leadership, Russia is concerned for Central Asia, Japan for East Asia, and India for South Asia. The basis for such concerns stems from worries that Beijing wishes to increase its political influence by using its economic power.

It is obvious that if the project becomes successful, the Chinese economy will be the first to benefit. From those engaged in construction to various other industries, Chinese companies will enter the region. In addition, China wants to upgrade its low value-added export items to high value-added export items in third countries by investing in high-technologies such as high-speed trains and nuclear power plants. Beijing also wants to use the Yuan as the circulation currency of its Silk Road project, supporting its use in exchange reserves forth initiative. As may be naturally deduced, if the “One Belt, One Road” initiative is implemented successfully, then not only the economic but also the political power of China will increase. Thus, Beijing will become a more decisive power in the future in a wide geography extending from Asia through Africa to Europe.

However, the initiative is still in the planning and promotion stage. It is not yet clear what resources will be used in the projects and investments that will fall under the “One Belt, One Road” umbrella. Here, the countries interested and included in the project continue to wonder how the funds allocated to the initiative will be used, and more importantly, what will be their share. The greatest risk facing Beijing at this point is its potential inability to live up to the high expectations revolving around the initiative. In other words, if the project falls flat in the face of high expectations on the part of the international community, China’s credibility maybe damaged in the medium term.