The Conference on ‘Great Silk Road Diplomacy: From History to the Future’ in Ashgabat, Turkmenistan  on March 14-15, 2013

With the neutrality status declared after gaining independence in 1991, Turkmenistan started to implement a distinct foreign policy strategy. In this way, Ashgabat attempted to preserve its stability in the state-building and nation-building processes, keeping its distance from current regional and global problems. Under the leadership of President Gurbanguly Berdimuhamedow, Turkmenistan gave the sign that Ashgabat will be more active in the international area with its new foreign policy concept, adopted for the period 2013-2017.

The ‘Great Silk Road Diplomacy: From History to the Future’ conference, held in Ashgabat and organized by the Institute of International Relations of the Turkmen Ministry of Foreign Affairs, on March 14-15, 2013, was a good opportunity to understand the current foreign policy of Turkmenistan. The Diplomacy Academy of the Turkish Ministry of Foreign Affairs and TIKA (Turkish Cooperation and Coordination Agency) were also among the organizing institutions of this conference. The cooperation opportunities in the historical Silk Road region were discussed at the conference, and participants from 23 different countries, including China, India, Russia, the UK, Iran, and the USA, participated in the conference. Furthermore, Turkmen and Turkish participants’ weight in all of the sessions was apparent. During the conference, Turkmen, Turkish, Russian, and English were used as working languages. Several political, economic, and cultural cooperation areas covering the historic Silk Road region were discussed during the sessions of this two-day conference. The conference was not only attractive for the issues discussed, but it was also a great opportunity in particular for the foreign participants to understand the new foreign policy concept of Turkmenistan. Furthermore, this conference made great contributions in enhancing the recognition of the Institute of International Relations, celebrating its fifth year of establishment. This Institute offers bachelor degrees and aims to educate more professional Turkmen diplomats in the Ministry of Foreign Affairs.

As a matter of fact, the Turkmen foreign policy followed for 20 years after gaining independence was shaped in accordance with the basic priorities of Turkmenistan. In 1991, the year in which Turkmenistan gained its independence, the country was not only the least developed republic in the Soviet Union; it was also the least sponsored government by Moscow. Very few industrial plants were built during the Soviet period, and the infrastructural investments throughout Turkmenistan were very inadequate compared to the other Soviet republics. The textile plants to process the cotton, which was the prevailing agricultural product, were in other republics. Additionally, Turkmenistan was one of the most unfortunate republics in terms of schooling rate. Thus, after gaining independence, Turkmenistan was deprived of the staff to manage the country politically and economically, to a great extent.

Furthermore, Turkmenistan faced serious security risks during its first years of independence. Turkmenistan, neighbor to Iran, Afghanistan, Uzbekistan, and Kazakhstan by land, and to Russia and Azerbaijan by the Caspian Sea, was the smallest in terms of population, and its national power capacity was the lowest, among those countries. Hence, it had no adequate capacity to stand against the military threats likely to be directed from other countries.

Furthermore, its neighbor Afghanistan had been stuck in the spiral of a civil war and foreign intervention since the 1970s, and was posing several security-related risks for Turkmenistan, including human and drug trafficking.

Under these conditions, Ashgabat developed a foreign policy strategy to avoid foreign threats and competition between regional and global powers, in the best possible way. Turkmenistan voluntarily declared itself to be a perpetual neutral state, and remained distant from regional organizations.

For the first 20 years of its independence, Ashgabat was engaged in the development of country, strengthening the state institutions, and nation-building process. The most important economic source was natural gas. For several years, Russia was the only route to transport the Turkmen gas to the international market. The Western route to pass through Turkey has not been opened due to status problems in the Caspian Sea, while the South route has not been opened due to the international embargo on Iran, and the Southeast route from Pakistan to India has not been opened yet due to the political instability in Afghanistan. Russia, also using the infrastructure from the Soviet era, both bought the gas from Turkmenistan at a very low price compared to the international market, as well as posed a problem for the economic stability of Turkmenistan by occasionally delaying payments. Thanks to the Turkmenistan-Kazakhstan-China pipeline, which has been operative since 2009, Ashgabat is now able to sell its natural gas, and its dependency on Russia decreased to a degree that it is now able to reach a great market like China.

Another priority of Ashgabat during last two decades was the nation-building process based on the Turkmens. For Ashgabat, no matter how advantageous it was that 85% of the population is ethnic Turkmen, the national consciousness even among the Turkmens was incredibly weak. Thus, all elements including folk songs, traditional patterns and dresses, and especially the Turkmen language, were used intensively while building national identity. Today, even the women working in government bodies wear traditional dresses. Furthermore, the flag of Turkmenistan and its map continue to decorate the streets and buildings.

Turkey’s contribution to the nation-building process of Turkmenistan

Turkey has offered favorable contributions since the first day of state-building and nation-building processes in Turkmenistan. Turkish businessmen made contributions to the national economy building process in Turkmenistan both by directly making investments and through trade. When the economy became pressed for cash due to the delays in payments from Russia for the Turkmen gas it purchased, Turkish companies remained in Turkmenistan and offered services for the national economy, while most of the foreign companies left the country. Furthermore, thanks to organizations like TIKA, Turkmenistan achieved certain infrastructure investments that were necessary in 1990s.

After 20 years of transition

During the post-independence period, Turkmenistan successfully built its national identity, and continued its push for further development. As of today, Turkmenistan has been ranked among the rich and prosperous countries in Central Asia. Another achievement of the Turkmenistan is that it was able to reflect the economic wealth it ensured to the public with gas sales, avoiding mafias, oligarchs, and tribes. After the sudden death of the founder President Saparmurat Turkmenbashi in 2006, Gurbanguly Berdimuhamedow was elected without any political instability. This was an indicator of the success of state building in Turkmenistan, because it is very common for newly-independent countries to drift into a state of chaos upon the death or overthrow of the founding leader.

After the first 20-year period, during which the country dealt with the state and nation-building processes and developmental issues, Turkmenistan achieved a stable structure in terms of politics and the economy. Ashgabat displays the signs of some changes in the neutrality policy it attempted to avoid being the center of regional and global competition. Turkmenistan now desires to be more active in regional and international cooperation projects, and is preparing to undertake an important mission as a bridge for trade and transit, in line with the re-construction of the modern Silk Road. In this scope, the country is rapidly developing its national highway and railway connections, and a bigger international airport that is likely to be a regional hub is being built in Ashgabat. Furthermore, projects are being developed to introduce the historical and natural beauties of the country, especially the coasts of the Caspian Sea, to the world tourism. Besides, Ashgabat can undertake a more active role in solving regional issues, especially the transition in Afghanistan in the post-2014 era. One can claim that a more active Turkmenistan will be present in international relations in the near future. 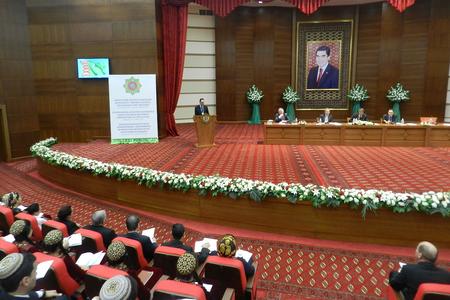