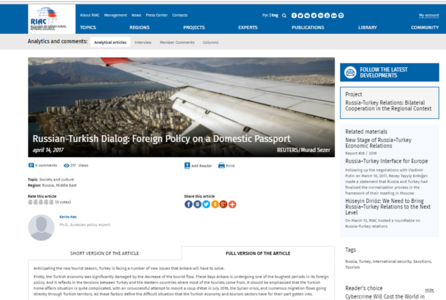 Anticipating the new tourist season, Turkey is facing a number of new issues that Ankara will have to solve.

Firstly, the Turkish economy was significantly damaged by the decrease of the tourist flow. These days Ankara is undergoing one of the toughest periods in its foreign policy. And it reflects in the tensions between Turkey and the Western countries where most of the tourists come from. It should be emphasized that the Turkish home affairs situation is quite complicated, with an unsuccessful attempt to mount a coup d'état in July 2016, the Syrian crisis, and numerous migration flows going directly through Turkish territory. All these factors define the difficult situation that the Turkish economy and tourism sectors have for their part gotten into.

Secondly, there are a number of unfavorable circumstances in Turkey-Russia relations that have changed the image of Turkey for Russians, and vice versa. It is obvious in this context that Russia, having long served as the second largest «supplier» of tourists to Turkey after Germany, inflicted a «social» setback on the Turkish economy. The crisis after the Russian aircraft was shot down in November 2015 and the subsequent high level rhetoric on both sides, as well as that it was keenly discussed in the mass media, created a negative image in the minds of the citizens of both countries.

On the one hand, Moscow faced the issue of the opportunity for Russian citizens to spend their holidays in the resort areas they are used to — in Turkey, Egypt, Tunisia; on the other hand, Turkey found itself in a situation where it might lose one of the key players in its tourism sector —Russia.

The 76% decrease in the tourist flow from Russia to Turkey (from 3.6 million people to 866,000 in quantitative terms) in 2015-2016 has been one of the most turbulent in recent times. One can track direct links between the political statements and their impact on Russian tourism by analyzing statistical data. The number of Russian tourists decreased by 87% in the first half of 2016 (before the Turkish establishment apologized for the shooting down of the aircraft) compared with the first half of 2015. Turkey incurred substantial costs due to the amount in arrears from the Russian market in 2016, which approximately equals to USD 2.5 billion. It should be noted that in 2015-2016 the total number of tourists to Turkey from other countries dropped from 36.2 million to 25.3 million people, which can be primarily explained by the Syrian crisis and security issues. Ankara’s profits shrank from USD 31.5 to 22.1 billion.

It is obvious that the situation has negatively influenced domestic economic conditions in the country. The tourism sector makes up about 6.2% of the total GDP and 21.9% of the total Turkish export. The decrease in the tourist flow also affected other areas of the Turkish economy, such as logistics and construction. Russian mass media and anti-Turkish propaganda played a pivotal role in the situation especially when it reached a cosmic level after 2015.Pyotr Stegniy:
Russia–Turkey Interface for Europe

It is evident in this context that Turkey is more than interested in the rapid resumption of the tourist flow from Russia. This explains a number of statements made by the Turkish establishment on the opportunity to give Russian citizens the right to cross the Turkish border on domestic passports. It is worth noting, however, that Ankara already gave this right to Georgian citizens at the end of 2011, and to Ukrainian citizens in March 2017. This proposal is nothing new for the Russian side as well. The issue had been widely discussed by the two sides before November 2015 and was basically closed for discussion after the crisis in Russian-Turkish relations. It is known that Moscow has imposed a number of restrictions in terms of toughening the visa scheme which includes a ban on employment for Turkish citizens in Russia and a temporary suspension of charter flights between Turkey and Russia. Apparently, the issue of crossing the border on Russian domestic passports was postponed indefinitely.

In the course of reestablishing relations, the tourist flow from Russia has grown dramatically. In January 2017 it increased by 82% compared to January of 2016, and in February 2017 it skyrocketed to 96% compared to 2016. Since 2014, the Russian national currency exchange rate has been decreasing, which has resulted in an increase of the tourist flow to the Crimea and the Caucasus. However it is clear now that the infrastructure of the Russian sea resort areas is not competitive with the ones in Antalya, for example. This largely defines the intention of the Russian tourists to go back to the customary resort areas on the Turkish coast.

Besides, Turkey is trying to attract those Russians who don't have an international passport, and this is about 72% of the population. From this perspective it can be assumed that Russian citizens do not believe in the threats most mass media are referring to, and the Turkish recreation facilities remain a high priority. That is why it is extremely important for Ankara to justify this trust and to ensure ultimate security for foreign citizens on their territory.

Tourist season might have positive connotations in terms of planning the launch of passenger cruises between Sochi, the Crimea, and Istanbul in the short run. Though a number of factors, of political character primarily, might compound the implementation of the project. On top of that, Ankara has made a decision to ban Russian ships from the Crimea from entering the Turkish Black Sea ports. It can be assumed that the Turkish proposal on permitting Russian citizens to enter the Turkish Republic on Russian domestic passports is a signal of closer cooperation with Moscow that can be started in the tourism sector.

No matter what the rhetoric on both sides on establishing good neighborly relations and leading a solid state-to-state dialog is, it is clear that a number of sharp contradictions between Ankara and Moscow haven’t been resolved. Pre-crisis «compartmentalization» of their relations has obviously changed to a situation where Moscow is no longer likely to separate foreign policy by segments that are either independent of one another or are not closely interconnected. Now the economic cooperation with Turkey is shaped by the decisions on key regional issues in Russia’s foreign policy. On the one hand, this approach is pragmatic for Moscow and reflects the Realpolitik concept, on the other hand, it largely complicates the process of regional reconciliation, state-to-state relations in particular, and causes new political contradictions.

It is known that the heads of both states acknowledged their commitment to promote the resolution of the political conflict in Syria, though in real terms both Moscow and Ankara pursue different aims. For Turkey, which is immediately next to the military activities along its borders, it is of vital importance to secure its own national interests in Syria. Russia’s key interest is to ensure security and its influence regionally. At the same time both states being partners «on paper» are playing their own political games, unacceptable for each of the partners respectively. For example, Moscow’s cooperation and real support of the Kurdish groups that Ankara officially considers terrorist groups gives rise to a lot of concern. Moreover, on the one side Russia is said to organize a «buffer zone» between the Kurdish forces in Afrin and Manbij, and opposition groups supported by Turkey and the Turkish army on the other side. Such agenda made Ankara terminateOperation Euphrates Shield in the North of Syria on March 30, 2017.

At the same time, the Kremlin proposes to adopt a new constitution for Syria, which grants «autonomy» to the Kurdish groups. This is definitely inconsistent with the way Turkey sees the future of Syria and with Ankara’s regional policy in general. The process that was successfully launched in Astana to normalize the Syrian dialog is losing its positive vector: the last meeting was not attended by the representatives of the Syrian armed opposition groups.

Both Ankara’s and Moscow’s actions towards the slowdown of lifting sanctions seem unreasonable. In defiance of the arrangements on the promotion of bilateral economic cooperation and bringing it to the level of USD 100 billion, the Kremlin stays reluctant in lifting a number of major sanctions on Turkish goods, and Ankara, despite the development of bilateral dialog, imposed restrictions on the shipment of grain products from Russia right after the meeting of the heads of states at the High-Level Cooperation Council on March 10, 2017. Apparently Moscow is looking forward to seeing more concessions from Turkey, and the process to normalize of state-to-state dialog is played according to the Russian script. This is perfectly tracked in the Syrian issue and in Turkey-Russia energy cooperation. It should be reminded that Ankara de facto omitted most of its claims on the implementation of Turkish Stream, whereas Moscow has not clarified its position on the key issues, for instance, in what status the Kremlin sees Ankara in the regional energy market, if it will be given the status of «energy hub» or just that of a «transit state».

Russia-Turkey relations are having controversial trends, still there is an opportunity to find common points of contact. The necessity for consensus on the most pressing issues both for Ankara and Moscow shapes the future of the state-to-state dialog and the situation in the region. In this context it is important to have a slow start with minor issues to rebuild the broken relations step by step, and it is tourism that might become one of the first steps towards further dialog.