The phrase “What matters is not how the votes are cast but how they are counted”, which is widely popular in Russia, is true of internal political processes in many countries across the globe. Germany is to hold a parliamentary election on 24 September 2017. Looking at how Germany-Turkey relations have been developing and taking into account the fact that Turkey is among the hot topics debated during the current parliamentary race in Germany, it becomes clear that the preferences of the sizable ethnic Turkish community in Germany will be of extreme importance to the outcome of the polls.

What is particularly interesting is whether the Turkish diaspora will heed Turkish President Recep Tayyip Erdogan’s call on his compatriots in Germany against voting for three particular parties: for the Christian Democratic Union of Germany, the Social Democratic Party of Germany, and Alliance 90/The Greens. Erdogan believes these three parties promote anti-Turkish sentiments. It should be noted that the Turkish diaspora of Germany, which mostly identifies with conservative values, historically supports the country’s social democratic parties.

Around 3 million ethnic Turks officially reside in Germany. Of this number, 900,000 have the right to vote. The figure may appear insignificant compared to the total number of German voters; it can hardly influence the outcome of the polls in any significant way. Yet the Turkish community’s sentiments are of particular importance to Germany.

The recent developments in Germany involving the Turkish political establishment are unprecedented in the recent history of the two countries. They clearly indicate that, in the short to medium term, Turkey's relations with Germany and the EU will remain far from normal.

The current souring of Ankara's relations with Berlin stems from a number of structural factors that first became apparent several years ago. The 2015 migration crisis, which peaked following the aggravation of the situation in the Middle East, became a pivotal point. One of the primary objectives facing the German government back then was to stop the influx of refugees as soon as possible. In this context, the EU member nations, first of all Germany, perceived Turkey as both Europe's rescuer and its potential undoer.

Fully aware that Europe was dependent on its position and actions, Turkey grew more vocal in demanding visa-free travel for its citizens and intensification of talks on the country’s accession to the European Union.

Since late 2004, Ankara has enjoyed EU candidate member status. To join the EU, each candidate state needs to meet the requirements of the so-called acquis, which consists of 35 chapters. One of the demands Ankara made in the context of the migration agreement signed with the EU in March 2016 was that another five chapters of the acquis be opened to it. However, this demand was turned down: the EU only agreed to open one new chapter.

The EU additionally demanded that Turkey meet 72 prescriptions related to its home policy before it could be granted visa-free travel. Nearly all these prescriptions were met, with the exception of several points mainly relating to terrorism. Ankara refused to amend this part of the country’s political life in any way. For this reason, the EU declined to grant visa-free travel to Turkish citizens.

As Ankara was incurring significant financial losses by keeping over 3 million refugees on its soil, the Turkish leadership requested financial assistance from the EU to the tune of 6 billion euros. The sum provided proved, however, much smaller.

Prior to the signing of the migration agreement, 6,000 refugees would arrive in the EU from Turkey every day. After March 2016, the figure dropped to 200.

Tensions further escalated in June 2016 after the German parliament passed a resolution on recognising the 1915 events as the Armenian Genocide. Interestingly, the resolution was initiated by the Greens, who are chaired by an ethnic Turk. The document was passed by an overwhelming majority of MPs, supported both by the ruling coalition and by the opposition parties. Ankara perceived this move by its most important ally in the EU as a knife in the back; it caused a storm of negative reactions towards Berlin.

A military base is a strategic facility for any country. One that hosts foreign troops is doubly so.

Incirlik Air Base is historically a key element of Turkey’s relations with its NATO partners, first of all the USA and the EU. It should be noted that Incirlik is not a NATO facility. Owned by Turkey, it may be used by foreign troops under a number of agreements and pursuant to issue of special government directives. Incirlik has mainly been used as a base for US Air Force troops because of its convenient location and the logistics opportunities it provides.

In 2014, the Western coalition launched an aerial operation against the Islamic State in Syria. This required using foreign military bases in the region. Turkey only opened Incirlik to coalition forces in July 2015, and then only to US and British aircraft. In December 2015 (as Turkey and the EU were negotiating the accord on immigrants), the German parliament passed a resolution on possible use of Incirlik by the country's troops and on sending military aircrew to the base.

The worsening of Turkey's relations with the West prompted Germany, the USA and the Netherlands to announce withdrawal of their air defence systems from Turkey, to be replaced by Italian and Spanish anti-missile systems. This decision sent a message to Turkey’s political establishment, which was, at that time, intensifying its anti-Kurd operations in the form of counteraction to different Kurdish groups that Ankara believes are engaged in terrorist activity. These developments caused serious dissatisfaction among the main EU and NATO actors.

The Turkish leadership found itself in a complicated situation. On the one hand, Germany was actively using Incirlik, a non-NATO facility, for operations against the Islamic State, which were very important to Berlin. On the other hand, Berlin had recalled its air defence systems, which had been an important element of Turkey’s security system.

In light of the continuing deterioration in Turkish-German relations and in the absence of any levers that Turkey could use to influence Germany, Ankara decided to ban German MPs from visiting Incirlik. The Turkish leadership could not have failed to realise that this step would further aggravate the conflict. Indeed, it resulted in withdrawal of 300 German troops and Luftwaffe Panavia Tornado fast jets from Incirlik. Yet the NATO base at Konya continued to host 25 German servicemen and several AWACS aircraft.

The developments that followed the attempted coup on 15 July 2016, namely introduction of a state of emergency in Turkey and the April 2017 referendum on switching from parliamentary to presidential governance, was a boiling point for both Ankara and Berlin.

Erdogan has repeatedly expressed his discontent with Germany granting asylum to people who, Ankara believes, participated in the attempted coup. Berlin, for its part, refuses to extradite these people to Turkey, arguing that the Turkish legal system disregards human rights.

The crisis of relations further worsened after Germany banned Turkish officials from organising rallies in support of the Turkish referendum following aggravation of tensions between Turkey and the Netherlands caused by The Hague's decision to ban the Turkish minister of family and social policy from entering the country.

Furthermore, in the past several years, Berlin has been officially criticising Turkey's National Intelligence Organisation, which, Germany believes, has intensified its activity in the country, operating through religious foundations, mosques, imams, and parishioners. Chancellor Angela Merkel has made a statement to the effect that the number of imams coming to Germany from Turkey has grown noticeably in recent years, which necessitates closer monitoring of mosques and various religious organisations involving natives of Turkey.

The crisis in Turkish-German relations is also affecting Germany's so-called hinterland, first and foremost Austria and the Netherlands.

Down the economic slope

This significant worsening of relations between Turkey and Germany has more than just political and military dimensions. It is also causing considerable economic losses to both Ankara and Berlin.

Berlin's possible sanctions against Turkey are being actively discussed at the moment. These might include not only suspension of financial assistance in the form of bank loans to Turkish companies and warnings to tourists about the dangers of visiting Turkey, but also cancellation of talks on updating Turkey's customs agreement with the EU.

It should be noted, however, that Turkey will not be the only country to suffer from possible economic sanctions. Germany, which remains Turkey's main trading partner, is going to suffer, too. The EU is the biggest exporter to Turkey, with a total share of 48%. Germany leads EU exports to that country, at USD14 billion per year. The EU is also the biggest importer from Turkey, at 39%. Germany's imports from Turkey stand at USD 21 billion annually, making the country the second biggest importer after China, with its USD 25 billion. Around 6,000 German companies operate in Turkey, providing over 60,000 local jobs.

Should the negotiations to update the customs agreement with the EU be frozen, Ankara might begin a methodical turn to the east, first of all towards the Eurasian space. Turkey is currently in talks with Russia over setting up a free trade area and over the possibility of joining the Customs Union and strengthening ties with the Eurasian Economic Union.

Furthermore, between November 2016 and March 2017, Germany passed 11 documents prohibiting exports of certain types of weaponry to Turkey. Earlier, the countries had been in active talks over joint production of Altay tanks and MILGEM Class warships. This is certainly a strong signal to Ankara.

The tensions between Ankara and Berlin will obviously last for a long time; the relations are unlikely to improve following the 24 September parliamentary election in Germany. What is important is that these tensions negatively affect Turkey's relations with the EU and NATO. On the other hand, Berlin, as the de-facto capital of the EU, may yet change the situation for its own good, provided that it sees political and economic benefits in doing so.

The worsening of Turkey's relations with the EU could bring Russia to the fore; such a development would hardly suit Berlin. For example, the recent reports about an agreement reached on deliveries of Russian S-400 SAM systems to Turkey raise more questions as to the course chosen by the Turkish leadership. Ankara is unlikely to keep knocking on the closed EU door unless it receives a convincing message that the EU is ready to work to improve the relations. As for Moscow, whether or not its doors are open to Turkey following the recent crisis between the two countries is anyone's guess. 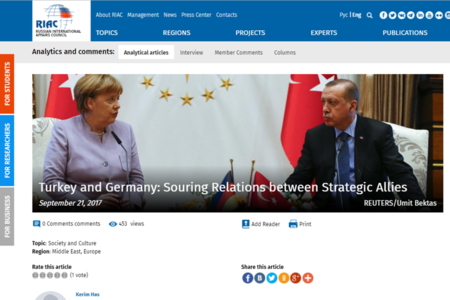